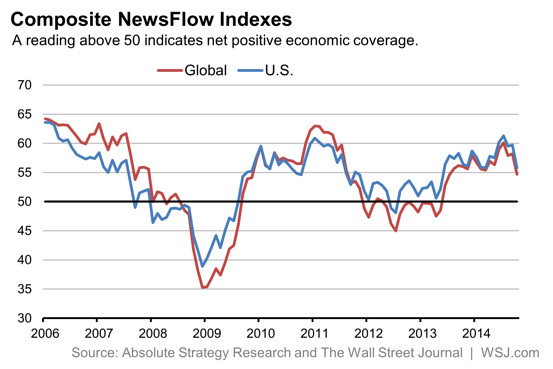 In another sign of the slowdown around the world, a measure of global economic conditions fell to a 15-month low in October. Even the U.S. didn’t avoid some decline in sentiment.

The Absolute Strategy Research/Wall Street Journal global news flow composite index declined to 54.7 last month from 58.2 in September, according to data released Tuesday. October’s was the lowest reading since July 2013. An index above 50 denotes positive news coverage on economic topics.

All six regional areas covered by the ASR research posted declines last month, a sign of the increased media reporting on weaker demand and labor markets across the globe. China’s composite index fell to 49 in October, a sign that news coverage was more negative than positive in the world’s second-largest economy.

Even the U.S., which has seemed to be bypassing problems seen elsewhere, couldn’t avoid more cautious coverage of the economy. The U.S. composite news flow index slipped to 55.8 last month from 59.7 in September and a recent high of 61.3 in July.

Even so, the U.S.’s continued expansion is helping out the global economy. ASR calculates that a global composite index excluding the U.S. would stand at 51.2 in October. down from 53.6 in September. Those readings are between three and five points lower than the reported global composite.

“These periods of divergence or ‘decoupling’ rarely persist for long, so the critical question is which way does it reconnect?” said James Tasker, economic analyst at ASR. “In the past, we have usually seen the rest of the world ultimately follow America’s lead.”

Increased media coverage of falling prices and disinflation was one focal point of the October data.

“Chatter about lower inflation in the U.S. is particularly striking,” said the report. “The U.S. inflation news flow has fallen to its lowest level since the early ’90s, partly reflecting the recent fall in oil prices.” At the same time, coverage of U.S. labor markets remains very positive, presenting “a potential challenge” to the Federal Reserve, said ASR.

“Chatter of tighter policy had been rising with the labor market, but in the last couple of months monetary policy news flow has fallen sharply, along with inflation news flow.”

A falling monetary policy index indicates expectations about an interest-rate rise are being pushed further into the future, Mr. Tasker said.

The ASR/WSJ indexes are released the Tuesday after the release of the U.S. Labor Department’s monthly employment report.