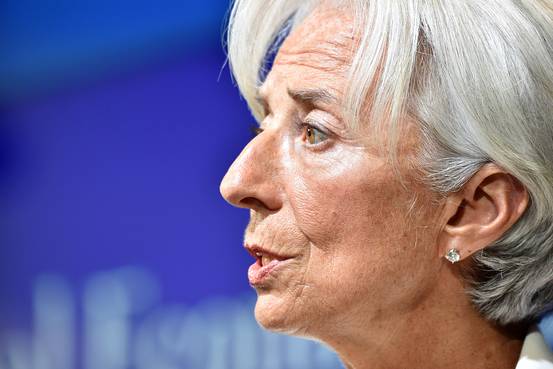 International Monetary Fund chief Christine Lagarde in Washington in July. IMF economists have warned that investors were taking on too much risk.
MLADEN ANTONOV/AFP/GETTY IMAGES

You can’t say you weren’t warned.

As markets around the world continue to take one of the worst beatings since the 2008 financial crisis, economists at some of the world’s top economic institutions are likely saying “I told you so” behind closed doors.

Fear that China’s economic woes could drain the life out of a slow-growing U.S. economy and destabilize an already fragile global economy just as the Fed prepares to raise interest rates for the first time in nearly a decade is fueling selloffs around the world.

No less than the U.S. Federal Reserve, the International Monetary Fund and the Institute of International Finance have warned for months investors were taking on too much risk, overpricing equities and underpricing credit. Selloffs were on their radar.

As early as July 2014, the IMF’s top economists said U.S. stock markets faced a potentially calamitous correction as investors were likely too optimistic about growth forecasts. If growth disappoints, said senior fund economist Nigel Chalk, “There will have to be a repricing at that point, and that might be destructive.”

The IIF, an industry group that represents around 500 of the world’s largest banks, funds, insurers and other financial institutions, also said then that investors should watch out for a decompression of volatility that had been wound down to near-record lows.

The IMF, whose quarterly outlooks have been increasingly dim over the last several years, repeated its warnings later in the year, saying the risk of a stock-market correction was rising as valuations became “frothy,” and the global economy was increasingly vulnerable to “dangerous bouts of volatility in bond, equity and currency markets.” Financial risk-taking looked a lot like 2006, warned the fund’s top financial counselor, José Viñal, raising the question of whether the global economy was on the cusp of a precrisis déjà vu.

The IMF also took an unusually bold stand on China’s growth prospects in January, low-balling Beijing’s official forecast and expecting the pace of economic growth in the world’s No. 2 economy to fall to its lowest level in decades. The World Bank, meanwhile, detailed the potential risks that China’s slowdown could have as the biggest risk to the global economy.

IMF’s top economist, Olivier Blanchard, said market turmoil was to be a theme for 2015. Market exuberance and a multitude of risks to the global economy prompted the IMF to warn in recent months against the Fed tightening too soon. The fund said wide, damaging swings in exchange rates and bond markets were likely going to become more commonplace, calling the “flash crash” in U.S. Treasurys last October and the surge in the Swiss franc this year harbingers of more volatility.

In May, Fed chief Janet Yellen joined the chorus in May, saying “potential dangers” lurked as equity market valuations appeared “quite high.”

Given the IMF’s record on calling the current market rout, it could prove disconcerting to heed their long-term forecast: Global growth may be in the middle of a decadelong rut.

How China’s Slowdown Could Drag Down the Global Economy

MF Lays Out Case For Fed to Stand Pat