Grand Central: A Roadmap to the Fed’s Thinking on the Jobs Report – Real Time Economics

HILSENRATH’S TAKE: A ROADMAP TO THE FED’S THINKING ON THE JOBS REPORT

Federal Reserve officials will have three U.S. jobs reports to examine before they make a decision at their June policy meeting about whether to raise short-term interest rates. The first comes Friday morning.

These reports are critically important because they help Fed officials decide if their criteria for rate increases are near being met. The Fed has said it will raise rates “when it sees further improvement in the labor market and is reasonably confident that inflation will move back to its 2% objective.” With that in mind here is a quick overview of how Fed officials are thinking about three key indicators in the new report:

Payrolls: Payroll employment increases have averaged 293,000 per month over the past six months. This is an extraordinarily fast rate of growth and has given many Fed officials confidence the economy is on a solid growth track, despite signs of a winter economic slowdown. Some slowdown in the pace of hiring seems likely. In the past some officials have laid down a 200,000-a-month pace as a benchmark that satisfies them the job market is improving. A number below that mark might sow some doubt about the health of the underlying economy, but officials would likely want to see more data before drawing firm conclusions. If the pace of hiring stays in the high 200s, the Fed’s confidence will build.

The jobless rate: The behavior of the jobless rate is very important to Fed officials right now. In comments at the Federal Reserve Bank of San Francisco last week, Fed Chairwoman Janet Yellen said, “An important factor working to increase my confidence in the inflation outlook will be continued improvement in the labor market. A substantial body of theory, informed by considerable historical evidence, suggests that inflation will eventually begin to rise as resource utilization continues to tighten.” At their March policy meeting officials estimated the jobless rate can settle between 5% and 5.2% in the long run, meaning that is their rough estimate of a full employment economy where jobs are plentiful and inflation stable. The jobless rate was 5.5% in February. Another drop in the jobless rate toward 5.2% would increase the odds of a rate increase in June. An increase in the jobless rate would increase Fed uncertainty about job improvement and resource utilization and lower the odds of a June rate increase.

Average hourly earnings: Ms. Yellen has said she doesn’t need to see a pickup in wages before deciding to raise short-term interest rates, but that she would be uncomfortable moving if she sees signs that wages are weakening. Hourly earnings have been growing at a 2% pace for the past couple of years. A pickup from that pace moves the Fed toward rate increases and a drop from that pace makes the Fed hold off.

Fed officials pay attention to lots of other indicators in the report, including labor force participation and broader measures of unemployment which account for part-time workers. But payrolls, the jobless rate and hourly earnings can give you a quick read of how the Fed will digest the numbers.

Yellen: Economic Inequality Long An Interest of the Fed. In a speech defending the Federal Reserve’s interest in economic inequality issues, Chairwoman Janet Yellen said Thursday more research is needed to understand what conditions allow people to move up and down the income ladder in the U.S. “We know that families are the locus of both opportunities and barriers to economic mobility,” but from that point, there remains a lot of uncertainty about the forces that affect and shape a person’s performance in the economy, Ms. Yellen said..

Fed’s Brainard: ‘Great Recession’ May Have Long-Lasting Financial Consequences for Younger Americans. High student debt, poor job prospects and shifting attitudes are inhibiting homeownership among younger Americans who came of age during the latest recession, potentially hindering the accumulation of wealth for that generation, Federal Reserve governor Lael Brainard said Thursday. “If the decline in homeownership among young people proves persistent, the implications for asset building for the future could be of concern, since homeownership remains an important avenue for accumulating wealth, particularly for those with limited means,” she said..

Pressure in Repo Market Spreads. A shortage of high-quality bondsis disrupting the $2.6 trillion U.S. market for short-term loans known as repurchase agreements, or “repos,” creating bottlenecks for a key source of liquidity in the financial system and sending ripples through short-term debt markets. Although traders said the impact so far has been manageable, the broad concern is that scarcity in repos will pressure rates and could complicate efforts by the Federal Reserve to lift interest rates when the time comes..

China’s Central Bank Vows to Maintain Liquidity. The People’s Bank of China said Friday it will maintain appropriate liquidity conditions as the economy faces increasing headwinds. It said in a statement after its first-quarter monetary policy meeting that it would work to further cut funding costs for borrowers and maintain reasonable credit growth. The PBOC also said it would keep the yuan at a reasonable level.–Dow Jones Newswires.

Hungarian Central Banker Sees Scope for Further Monetary Easing. Hungary has room to cut its interest rates even more from 1.95%, a record low for the country, because of falling consumer prices and a recent conversion of foreign-currency loans into forints, which has reduced the vulnerability of households, a central banker said in an interview.

Bank of Russia to Hold on to Moscow Exchange Stake. Russia’s central bank has decided not to sell its stake in the Moscow Exchange, as was initially planned, because of continuing financial turmoil in the country, central bank officials said on Thursday. The Bank of Russia, which owns 10.75% of Moscow Exchange stocks, was supposed to sell its stake by the end of the year, but will hang on to the voting power that comes with them in case it has to coordinate action at times of financial crisis, it said.

New Data Eases Fears of Australian Housing Problem. While stalling growth caused the Reserve Bank of Australia to cut its benchmark interest rate to a record low earlier this year, worries that easier lending could stoke a property bubble persist. But the latest data on house-price growth suggests those concerns are inflated, which should liberate central bank policy makers to cut rates further.

Czech Central Bank May Need to Weaken Currency Further. The probability has risen that the Czech central bank will need to further weaken the koruna to boost consumer price growth toward its inflation target, according minutes of its last policy meeting, released Friday.—Dow Jones Newswires

Five Things to Watch in the March Jobs Report. Will the labor market continue to shrug off recent signs of weakness that have popped up in other sectors of the U.S. economy? Crucial clues will come in the March jobs report, due out Friday at 8:30 a.m. EDT from the Labor Department. Economists forecast that nonfarm employers added a seasonally adjusted 248,000 jobs last month, a mild slowdown from February’s 295,000 gain, and think the unemployment rate will hold steady at 5.5%. Here are five things to watch. 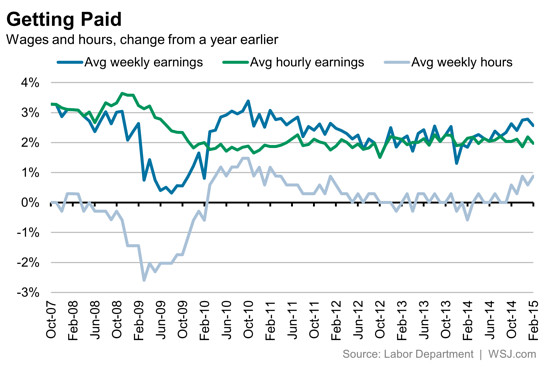 Rate Increase Is a Job for the Fed. “If an unemployment rate falls in the woods when no one is around, does it make a sound?,” asks Spencer Jakab in the Ahead of the Tape column. “The stock market will be closed Friday for a holiday, probably saving some traders from ill-advised, knee-jerk reactions to the day’s big jobs numbers. But, barring a surprise, the people who really count, rate setters in Washington, should hear a clear message: It is becoming very difficult to find an excuse in labor statistics to not tighten monetary policy soon.”

Fed Rate Rise Must Come to Terms With Investors. “The gulf between what the Federal Reserve thinks it will do with interest rates and what the credit market is implying will happen might not be as wide as it seems,” writes Justin Lahart in a Heard on the Street post. “Even so, investors could find themselves on shaky ground. As the Fed prepares to undertake an unprecedented move away from its zero-rates policy of the past six years, investors are having a hard time gauging when and by how much things will change. That is especially understandable given conflicting signals being sent by jobs and inflation.” 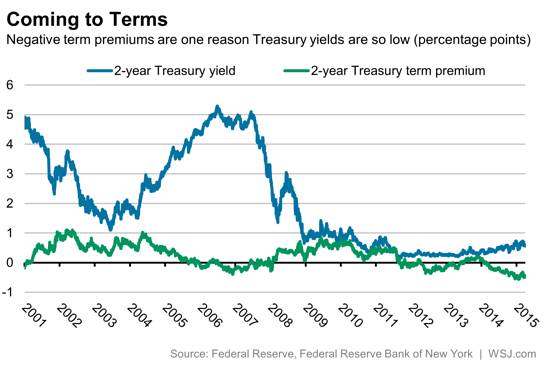 – Fed governor Daniel Tarullo has been reappointed to another two-year term as chairman of the Committee on Supervisory and Regulatory Cooperation of the Financial Stability Board, the Basel-based body announced. Glenn Stevens, governor of the Reserve Bank of Australia, succeeds Mexico’s central bank governor Agustin Carstens as chairman of the FSB’s Committee on Assessment of Vulnerabilities.

– The Commerce Department will begin releasing an advance report on international trade in goods starting in July, the agency said Thursday. The report aims to improve the government’s early estimate of gross domestic product by allowing Commerce to incorporate three months of official trade data into the first GDP calculation. The first report is due July 30. –Dow Jones Newswires

– The U.S. trade gap shrank to its lowest level in more than five years last month, largely reflecting a hangover from the West Coast ports labor dispute that left a bottleneck of goods. The trade deficit narrowed to a seasonally adjusted $35.44 billion in February, the Commerce Department said Thursday, and January’s deficit was also revised lower.

– The number of Americans seeking first-time unemployment benefits fell to near the lowest level in 15 years last week, a sign of continued improvement in the labor market. Initial jobless claims decreased by 20,000 to a seasonally adjusted 268,000 in the week ended March 28, the Labor Department said Thursday.