When Bank of Japan Gov. Haruhiko Kuroda holds his monthly press conference Thursday, he’ll face two big questions. First, will he temper his steadfast optimism about Japan’s economic recovery after a string of disappointing summer data? Second, if he does, will that alter his confidence that inflation remains on track to hit his target next year?

The answer to the first may be yes. Even so, the answer to the second is probably no.  That means the central bank is likely to stick this week to its current stimulus program without any expansion. Unless conditions continue to decline markedly, that stance could hold through the end of the year.

That has, in fact, been the pattern for the BOJ over the past year. Policy board members have issued four updated consensus forecasts for the current fiscal year ending next March. Each time, they’ve marked down projections for price-adjusted economic growth, from 1.5% in October to 1.0% in July. The next official forecast is due in late October and another BOJ downward revision is likely.

Still, the BOJ has, throughout, kept steady its forecast for inflation, maintaining its view that the most closely watched price gauge would rise 1.3% for the year, a crucial stepping stone to hitting its 2% inflation target next year. There are several reasons for its optimism:

First: BOJ economists believe that as long as the economy expands faster than its “potential” rate — the pace a country can grow without straining resources — inflationary pressures will build. And the central bank calculates that Japan’s economy has become so sclerotic that its “potential” growth rate has fallen to about 0.5% per year. Between the steady hollowing out of Japanese industry, and a shrinking, aging workforce, it doesn’t take much growth to spark inflation, in the BOJ view.

The central bank got encouragement Tuesday, when wage data showed, by one measure, the biggest jump in pay in 17 years. That report tempered some of the recent gloom, and helped push the Nikkei Stock Average up to its highest daily close since January.

Third: growing confidence in the U.S. recovery — and expectations the Federal Reserve will start raising interest rates next year — could weaken the yen against the dollar. The yen Wednesday hits its lowest point against the dollar since Jan. 10.  (When a central bank tightens credit, it tends to strengthen that country’s currency). That would create fresh inflationary pressures by boosting import prices in Japan.

Fourth: a weaker yen would also aid Japanese corporate profits by cutting dollar-valued costs for Japan-made goods. But Japanese companies remain famously stingy, sitting on large piles of retained earnings in the form of cash. The main question going forward: whether Japanese companies will plow those profits back into the Japanese economy, through still-higher wages, more capital spending, or dividends, further fueling growth and inflation. The answer to that will have a big impact on whether Mr. Kuroda can stick to his forecasts, and his policy path.

ECB On Different Path than Other Major Central Banks. If the ECB does signal fresh stimulus measures Thursday, that would set it apart from other major central banks such as the Federal Reserve, which is expected to raise interest rates around the middle of next year, and the Bank of England, which is seen doing so sooner. The Fed and BOE eased policy more aggressively after the financial crisis than the ECB by using their balance sheets to buy large swaths of debt in financial markets. The U.S. and U.K.  economies have recovered more vigorously than the Eurozone.

Further Measures Will Be A Close Call for ECB. No pressure or anything, but market expectations for action — or at least heavy hints at action from Mr. Draghi — this week are running high. Here’s a rundown of some market views.

Eurozone Private Sector Activity Slowed Sharply in August. Activity in the eurozone’s private sector slowed more sharply than first estimated in August, and declined in both France and Italy, indicating that the currency area is unlikely to soon escape a lengthening period of low or no growth.

ECB Seeks To Harmonize Bank Regulation. The European Central Bank is taking steps to make sure that national interests don’t interfere with its efforts to harmonize banking regulation at the European level, said ECB Executive Board member Sabine Lautenschlaeger in remarks Wednesday.

ECB’s Knot Urges Eurozone Governments To Fix Finances. Euro-zone governments must move ahead with fixing their finances and overhauling their economies, said Klaas Knot, a member of the ECB’s governing council. “The ECB won’t do this for them. It’s up to the countries to show they are serious,” he said in a speech in The Hague. –Dow Jones Newswires

Brazil Central Bank Expected to Leave Rate Unchanged. The central bank  is expected to hold its benchmark interest rate steady at 11% Wednesday amid a weak economy and looming presidential election, according to a survey of 16 economists by The Wall Street Journal.

Obama Visits Estonia’s Central Bank. President Barack Obama held a joint press conference Wednesday at the Bank of Estonia with Estonian President Toomas Hendrik Ilves.  Mr. Obama, who is in Estonia to offer assurances that NATO will defend its Baltic allies, spoke at the Bank of Estonia during a whirlwind day in Tallinn that includes meetings with leaders from Estonia, Latvia and Lithuania. 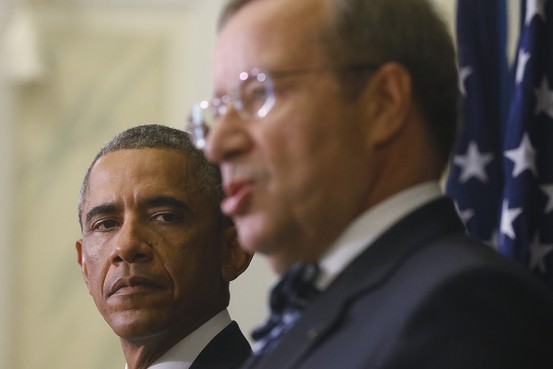 Russia’s Central Bank Reiterates Commitment to Let Ruble Float Freely.  “The central bank is now gradually switching to a floating exchange rate. That means that the existing [ruble] trading corridor will be scrapped by 2015, while interventions will be carried out more rarely,” the central bank’s first deputy chairman Ksenia Yudaeva said in an opinion piece published in a monthly magazine Economic Issues. –Dow Jones Newswires

Israeli Finance Minister, Central Bank at Odds Over Budget Priorities. Israel’s finance minister, Yair Lapid, said Tuesday he favors increasing the deficit in the 2015 budget in order to avoid spending cuts in education and raising taxes. But the governor of the central bank warned in a speech Tuesday that such a move could bring about economic instability and a loss of Israel’s fiscal credibility.–Dow Jones Newswires

Sterling Finally Wakes Up To Scottish Threat. If the pound’s tumble on Tuesday is anything to go by, you might be forgiven for thinking that investors have only just been told that Scotland is voting on independence from the U.K. in two weeks’ time. In fact, the move was triggered by the latest YouGov poll, showing that the pro-independence camp is gaining momentum. Somewhat surprisingly, big questions remain unanswered so close to the vote: Can Scotland maintain a currency union with the rest of Britain? Who will regulate Scotland’s financial industry? What about a central bank?

OECD Sees Weak Recovery in Jobs Markets. With the global economic recovery proving modest and uneven, employment rates will remain well below their pre-crisis levels in many developed countries through 2015, the Organization for Economic Cooperation and Development said Wednesday.

One powerful legacy of the U.S. recession — soaring use of food stamps — is beginning to fade. There were 46.2 million Americans on food stamps in May, down 1.6 million from a record 47.8 million in December 2012. Some 14.8% of the U.S. population is on the Supplemental Nutrition Assistance Program, down from 15.3% last August. 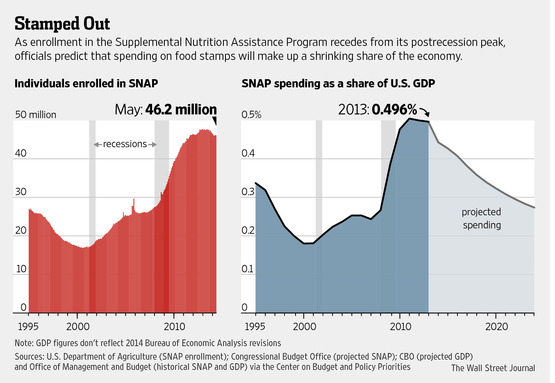 -Fed Board of Governors holds an open meeting on rulemaking in Washington at 10:30 a.m. EDT

What Does Money Velocity Tell Us about Low Inflation in the U.S.? Why has inflation been so low in the U.S. since 2008 while the money supply has grown at a much faster pace? The answer, Yi Wen and Maria A. Arias write on the St. Louis Fed’s On the Economy blog, “lies in the private sector’s dramatic increase in their willingness to hoard money instead of spend it.”

ECB President Mario Draghi “broke three taboos at once” with his Jackson Hole speech last month, Jean Pisani-Ferry writes on Project Syndicate. “First, he based his reasoning on the heterodox notion of a policy mix combining monetary and fiscal measures. Second, he explicitly mentioned the aggregate fiscal stance, whereas Europe has always looked at the fiscal situation exclusively on a country-by-country basis. Third, his claim that preventing the ECB from acting as a lender of last resort imposes a high price – making governments vulnerable and reducing their fiscal space – contradicts the tenet that the central bank must not provide support to government borrowing.”

The European Central Bank could take a big step towards reducing the reliance of European businesses on bank lending, and in the process boost growth prospects, by quickly launching a program to buy Asset Backed Securities, Alberto Gallo, head of macro-credit research at the Royal Bank of Scotland, in The Wall Street Journal.

As summer turns to fall, Tim Duy takes a look at the state of play as the Fed eyes normalizing monetary policy. “The baseline path for interest rates is a delayed and gradual rate hike scenario beginning mid-2015.  It seems reasonable, however, to believe that the risk is that this baseline is too dovish given the general progress toward the Fed’s goals, a point made repeatedly by Fed hawks.”

-Libya’s central bank wants the country’s warring factions to leave it alone, Reuters reported. “The central bank is the last defence line of state institutions and it is very important that it stays far away from political struggles,” it said in a statement.