Grand Central: Big Question for Fed Is Not When, But How To Raise Rates – Real Time Economics

HILSENRATH’S TAKE: BIG QUESTION FOR FED IS NOT WHEN, BUT HOW TO RAISE RATES 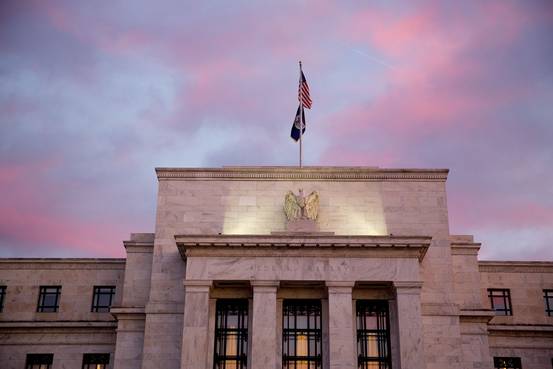 Minutes released by the Federal Reserve of its March policy meeting were a reminder that the central bank could face real operational challenges when it decides to start raising short-term interest rates.

As part of its bond-buying programs, the Fed has flooded the banking system with $2.7 trillion of funds known as reserves. Bank reserves are like a dollar in your pocket – they pay no interest. This abundance of funds is a giant weight keeping short-term interest rates near zero. When it comes time to raise interest rates the Fed will need to either a) eliminate those reserves or b) pay a higher interest rate than zero to private financial institutions in exchange for them. The Fed has chosen the latter route for the early stages of the rate hike cycle, but the minutes showed Fed officials are still struggling to define the tools they’ll use to pull this off.

Paying higher rates to banks is simple since they have accounts with the Fed. But the reserves seep out of the banking system into other financial institutions like money market mutual funds and officials are reluctant to use a new instrument – overnight reverse repo trades – designed to manage rates outside of the banking system. Last September they set a $300 billion cap on these trades. In March they agreed they might need to ignore their own cap, according to the minutes.

Fed officials also entertained ways to eliminate reserves more quickly than planned, including by selling some securities before they mature or allowing some to mature without reinvesting the proceeds. It is striking that they discussed new strategies for eliminating reserves at the March meeting. For months it had sounded like Fed officials were settled on their plans on this front – no asset sales and continued reinvestment of proceeds from maturing securities until after the Fed had already started raising rates. Now they don’t sound so sure about that strategy. “A number of participants suggested that it would be useful to consider specific plans for these and other details of policy normalization under a range of post-liftoff scenarios,” the minutes said.

For years, Fed officials have sought to reassure the public that they had all the tools they would need to raise interest rates when the time came, even with all of these reserves in the banking system. The minutes show that even now the mechanics of how they’ll do this are very much a work in progress, and a possible source of market uncertainty as the Fed looks toward rate increases later this year. 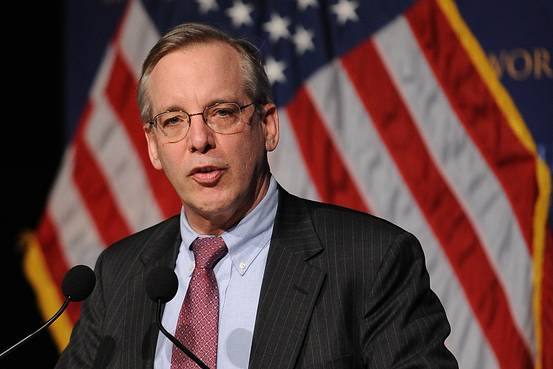 Dudley: Weak Data Sets Higher Hurdle for June Rate Hike. The recent string of disappointing U.S. economic data is setting the bar higher for the Federal Reserve to begin raising rates this June, New York Fed President William Dudley said Wednesday. “If you look at the broad set of data that we’ve gotten in recent months, data has very much surprised to the downside,” he said at a Reuters Newsmaker event. “It’d be reasonable to think that the timing of the Fed’s first rate hike might be a little further off in time. I can imagine a situation where a June rate hike could still be in play….but obviously it’s a bigger hurdle because we’ve had a lot of weak data.”

Fed Minutes: Officials Divided On Whether June Rate Increase Warranted. Fed officials were divided at their March policy meeting on whether they might raise interest rates in June, and recent soft economic data could make a midyear move even less likely. While “several” officials thought June would be the right time to raise rates, others thought it would be better to wait longer and some thought the Fed might need to wait until 2016, the minutes said.

Fed to Temporarily Lift Cap on Reverse Repos Operations at Liftoff. Fed officials in March decided to expand the boundaries of a program they intend to use to control short-term interest rates once they start raising them. The overnight reverse repurchase agreement program is one of several tools the U.S. central bank will use to raise rates that have been pinned near zero since December 2008. Rather than cap the total activity at $300 billion per day, as previously planned, officials decided they might allow a higher limit, at least in early stages of rate increases, according to minutes of the March 17-18 Fed meeting, released Wednesday.

In Republican Attacks on the Fed, Experts See a Shift — NYT. The Fed has long been a popular target for politicians during periods of economic distress. Sarah Binder, a political scientist at George Washington University, has shown that congressional prodding of the Fed rises and falls with the unemployment rate. But she also found a striking shift: Democrats once proposed most bills to change the Federal Reserve but in recent years Republicans have taken their place, offering about two-thirds of such measures since 2010.

Bernanke’s Memoir Title, ‘The Courage to Act,’ Hits a Nerve.  Maybe the lesson is it takes courage to name your memoir “The Courage to Act.” That’s the title former Fed chairman Ben Bernanke chose for his memoir that will go on sale in mid-October. Not everyone has been enamored with either Bernanke or his book-titling skills.

IMF Warns, Again, of Growing Shadow-Banking Risks. “The evidence calls for a better supervision of institution-level risks,” the International Monetary Fund said Wednesday in a new assessment of the global financial system. “Currently, the oversight of the industry focuses on investor protection and disclosure, and regulators conduct little monitoring in most countries.”

Europe’s Plunging Borrowing Costs Mark Two New Milestones. Europe’s plunging borrowing costs marked two new milestones on Wednesday, with Switzerland becoming the first country ever to issue 10-year debt that gives investors a yield under 0%, and Mexico lining up a rare deal to borrow euros that it will repay a century from now. 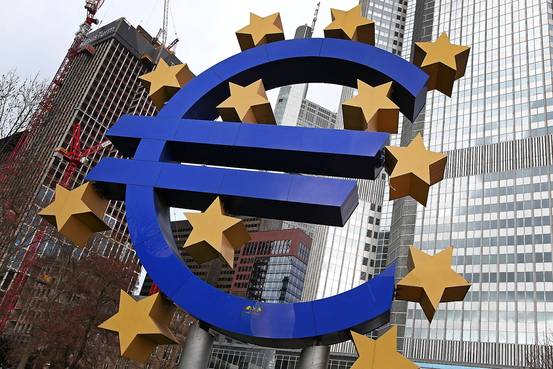 Frankfurt’s Shabby Euro Statue Needs a Bailout. The euro is a symbol of European unity. But the euro symbol is falling apart and it will cost a lot of euros to fix.

BOE Leaves Policy Unchanged. The Bank of England left its main interest rate unchanged Thursday following a further slowdown in inflation in the U.K., where campaigning in national elections has entered its final month. The BOE said in a statement that its rate-setting Monetary Policy Committee opted to keep the central bank’s benchmark rate at 0.5% following its April meeting. Officials also agreed to leave the size of the BOE’s bond portfolio unchanged at 375 billion pounds ($558 billion).

Bank of Korea Holds Benchmark Rate Steady. South Korea’s central bank on Thursday kept its benchmark interest rate unchanged as widely expected. Few analysts had forecast a rate change in April after the Bank of Korea on March 12 cut its policy rate to a record low of 1.75%, a move that eased pressure on the central bank to loosen policy further and earned the bank some time to monitor the situation. Twenty two of 23 economists surveyed by The Wall Street Journal had expected the bank to stay on hold this time — Dow Jones Newswires.

The U.S. Oil Story in Seven Charts. Since mid-2014, the price of a barrel of crude has fallen by nearly half. That is offering a boost for American consumers–a net benefit to the overall U.S. economy – but constraining budgets at oil and gas companies. The result so far has been big cuts in capital spending, layoffs and rising production – and effects are starting to show up in more national economic data. 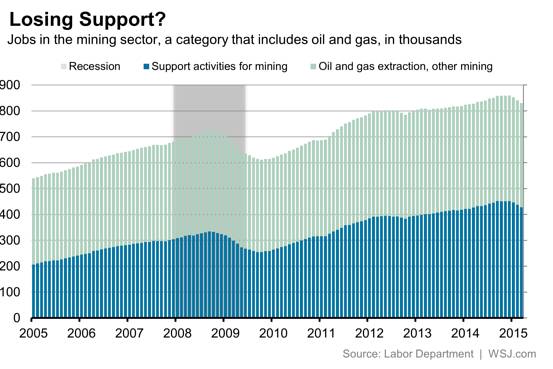 Is Your Job ‘Routine’? If So, It’s Probably Disappearing. The American labor market and middle class was once built on the routine job–workers showed up at factories and offices, took their places on the assembly line or the paper-pushing chain, did the same task over and over, and then went home. New research from Henry Siu at the University of British Columbia and Nir Jaimovich from Duke University shows just how much the world of routine work has collapsed. The economists released a paper showing that since 2001, the economy’s job growth has come entirely from nonroutine work. 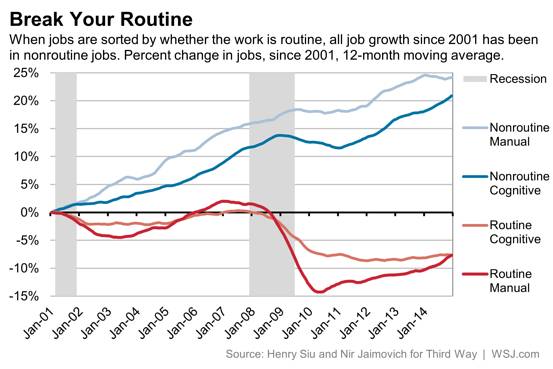 On Financing Retirement with an Aging Population. “A challenging economic policy issue facing the United States and many other nations is the financing of retirement as the population ages and the number of workers per retiree falls,” Edward C. Prescott and Ellen R. McGrattan wrote in a Minneapolis Fed staff report. “We find that the fall in the number of workers per retiree can be handled without a major change in the current retirement financing scheme. Some tax policy changes, however, dramatically increase welfare. These changes entail lowering or eliminating income taxes and relying more on saving for retirement and less on lump-sum transfers to retirees.”

Post-Crisis Risk Casts a Darkening Shadow. “Squeezing risk out of the economy can be like pressing down on a water bed: The risk often re-emerges elsewhere,” Greg Ip writes in his Capital Account column in the Journal. “So it goes with efforts to make the financial system safer since the financial crisis.”

It’s Hard to Lift Wages if the Fed Doesn’t Make It a Priority. “If the Fed fails to give stagnant wage growth a central a role in economic policy-making, then wage growth may once again end up being weaker than it otherwise could be, “ Jared Bernstein writes for the Upshot.

The Hopeful Quest for ‘Full Employment.’ “The Fed should maintain its ultra-easy money policy until higher wages or prices indicate that the economy is bumping against its production limits,” Robert Samuelson writes in the Washington Post. Given the uncertainties about where “full employment” lies, he says, “the Fed should now err on the side of job creation. Inflationary pressures are scant; the economy’s strength seems fragile.”

ECB Should Switch Focus of QE Program. In a post on VoxEU, Urszula Szczerbowicz and Natacha Valla of France’s CEPII research center write that the European Central Bank should change the focus of its bond purchases under the recently expanded program of quantitative easing to buy more debt issued by European agencies and institutions that have a direct role in financing investment. “Instead of sovereign bonds, the eurozone should focus on assets that are the closest to job-creating, growth-enhancing, and innovation-promoting activities,” they write. “In particular, instruments issued by agencies and European institutions should be given a prominent role.”

–Former Fed chairman Ben Bernanke’s upcoming book has a title and release date: “The Courage to Act: A Memoir of a Crisis and Its Aftermath,” coming out on Oct. 5, 2015.

–The former Fed branch office in Seattle has been sold to a developer who plans to rehabilitate it, the Seattle Times reported this week.

–Economic growth is set to slow in some of the world’s largest economies, although the eurozone is set for a pickup, according to leading indicators released Thursday by the Organization for Economic Cooperation and Development.

-Bank Indonesia Thursday issued regulations reinforcing the position of the rupiah as the only legal tender within the country, as part of its moves to help the embattled currency — Dow Jones Newswires.