BOE Gov. Mark Carney said Wednesday the economy is gaining strength. But the minutes of the Monetary Policy Committee’s July meeting show little sign the group has a clear sense of when it is likely to raise its benchmark interest rate.

The record released Wednesday showed that once again, none of the nine saw a pressing need to break ranks and vote for a rate increase. To be sure, they did consider the arguments for raising rates, with some members expressing the view that the risk such a move would derail the recovery “was receding as that expansion became more established.” But others argued that a “premature tightening in monetary policy” could leave the economy vulnerable to shocks.

“The only clear message that comes across in the July minutes is that the MPC are not sure what to do, other than wait for more clarity in the data,” wrote Alan Monks, an economist at JP Morgan, and it’s hard to disagree with that assessment.

That search for clarity is firmly focused on the jobs market–as in the U.S.–and in particular the very slow pace of wage growth. Almost every other piece of economic data suggests wages should be picking up quite strongly, but figures released last week showed earnings excluding bonus payments rose at an annual pace of just 0.7% in the three months to May, the slowest pace of growth since comparable records began in 2001.

MPC members will wrestle with that puzzle as they prepare their new economic forecasts for release August 13. They agreed at their July meeting that it has increased uncertainty about the amount of slack in the economy, and that there may be an argument for “putting more stress on the expected path of costs, particularly wages, in assessing inflationary pressures.”

That may indicate a first rate rise is further away than many expect. All we know for now is that the nine have “no preset timing” for that long anticipated and much speculated upon move.

Carney: U.K. Economy Strengthening But Headwinds Likely to Keep Lid on Rate Rises. The U.K. economy is gaining strength but will face persistent headwinds in the years ahead that are likely to keep a lid on future rises in interest rates, Bank of England Gov. Mark Carney said Wednesday. Minutes of the July meeting of the BOE’s rate-setting Monetary Policy Committee, published earlier Wednesday, showed the nine-member panel voted unanimously to keep the BOE’s benchmark rate at 0.5% this month.

Deutsche Bank Finance Chief Faces Heat After Financial-Reporting Exposure.  Stefan Krause has made an overhaul of the bank’s financial-reporting systems a cornerstone of his six-year tenure at the bank. But with the Federal Reserve Bank of New York citing serious concerns about the bank’s financial data, Mr. Krause himself is now under pressure.

Euro-Zone Recovery Regains Some Momentum in July. The euro zone’s economic recovery appears to have regained some lost momentum in July, as surveys of purchasing managers pointed to an increase in private-sector activity driven by Germany and the services sector. However, the surveys also recorded growing concerns about the crisis in Ukraine, which may be responsible for a slowing in new orders and weak hiring.

Euro-Zone Consumer Confidence Weakened in July. Consumer confidence in the 18 countries that share the euro dropped for the second straight month in July, an indication that new stimulus measures announced by the European Central Bank have failed to convince households that the economy is on the mend.

Gauge of Chinese Manufacturing Activity Rises to 18-Month High. A preliminary gauge of Chinese manufacturing activity reached an 18-month high in July, in a sign that Beijing’s efforts to stimulate the economy are having an impact. Economists React.

Conditions Suggest Volatile Money Flows to China, Official Says. China could face more “volatile” financial flows in the second half of the year, as major economies tighten their monetary policy, a Chinese official said on Wednesday. Guan Tao, head of the department of international payments at the State Administration of Foreign Exchange, stopped short of saying China would face capital flight during the rest of the year.

Japan Exports Continue to Disappoint. Japan’s run of monthly trade deficits reached the two-year mark in June as exports fell while imports increased, reinforcing the view that the deficits are here to stay for the once powerful exporter nation. The continuing weakness of exports has raised concern among policy makers as they could hamper Prime Minister Shinzo Abe’s efforts to stamp out 15 years of deflation.

Reserve Bank of New Zealand Raises Cash Rate to 3.5%.  New Zealand on Thursday raised interest rates for the fourth time this year but signaled it wouldn’t introduce further increases until the impact of the latest hike has been assessed.

New Zealand Raises Eyebrows With Dollar Talk. The New Zealand central bank’s decision to raise interest rates Thursday was largely anticipated by the markets. Its stance on the soaring local currency, though, took them by surprise. Describing the Kiwi dollar’s strength as “unjustified and unsustainable,” the Reserve Bank of New Zealand was widely seen as firing the first shot in a new war aimed at lowering the currency, the stubborn strength of which continues to hobble the nation’s exporters.

Polish Central Banker: No Reason for Imminent Rate Cuts. Poland’s rates panel has no reason to deliver an interest rate cut soon, said one of the panel’s members Andrzej Kazmierczak on Wednesday. He made the comment after the nation’s statistics office said retail sales were much lower than expected in June, growing only 1.2% in annual terms.

Analysts Doubt Hungary Central Bank Governor’s Forward Guidance. Hungary’s central bank governor said Tuesday that the institution was done cutting interest rates, but analysts aren’t so sure. The central bank on Tuesday lowered its benchmark rate by 0.2 percentage point to 2.10%, a deeper cut than expected and the latest in a series of monthly cuts since August 2012 when the rate was 7%. Gov. Gyorgy Matolcsy followed by announcing there won’t be any more cuts and the rate won’t change until at least the end of 2015.

The International Monetary Fund Wednesday revised its growth outlook for the U.S. economy for the second time in two months after a first-quarter contraction turned out to be worse than the fund originally forecast. The IMF cut its growth expectations by 0.3 percentage point to 1.7%. The latest prognosis is lower than the most pessimistic number issued by Federal Reserve officials in June at 1.9% and far below the central figures predicted by the central bank’s policy makers. 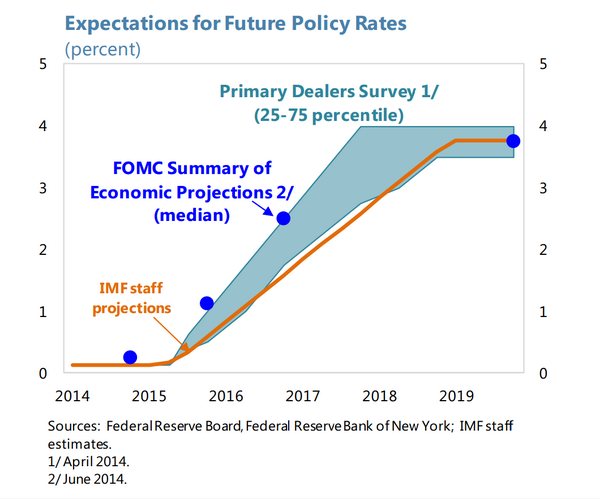 Is the BRICS Bank More “Democratic” Than the World Bank? Economists at the Council on Foreign Relations map the voting share of the World Bank’s founding members and find it has fallen over the years from 100% to 49.7%.  This means that its 37 founders currently have less voting power than the five BRICS bank founders will ever have within their new institution.  That’s because the BRICS bank articles of agreement do not allow the founders’ voting share to fall below 55% – ever, no matter what the bank’s future membership looks like.

Just what Deutsche Bank needed: another reason for investors to doubt its balance sheet, writes Paul Davies in the Journal’s Heard on the Street column. The German banking giant has been called out by examiners at the New York Fed for reporting unreliable numbers about its U.S. operations since 2002. That raises questions about Deutsche Bank’s books overall: the U.S. operations reportedly could equal nearly one-quarter of the firm’s total balance sheet.

Alen Mattich in the Journal offers two cheers for Spain’s recovery. “But is Spain’s recovery built on fragile foundations?” he writes. “The economy is expected to grow by 1.3% in 2014 and 2% in 2015, according to the Spanish central bank, up from earlier projections. The country’s growth comes thanks in no small part to Brussels’ indulgence of its very substantial government deficits.”

-European leaders announced Wednesday that Lithuania will become the 19th country to use the euro, with the currency entering circulation there on Jan. 1.

-Sandra Pianalto, who stepped down as Cleveland Fed chief on June 1, has become a member of the board of power management company Eaton Corp. PLC’s board. –Dow Jones Newswires

-Retail sales this year are likely to be lower than expected, the National Retail Federation, the industry’s main trade group said Wednesday, as chains struggle to lure consumers back to their stores after a long, harsh winter.