The Bank of England’s doubts about the U.K. economy’s ability to meet rising demand for goods and services appear to have eased, paving the way for a gradual rise in interest rates in coming years.

The central bank has long been puzzled by the very slow growth of worker productivity in recent years, and feared that it might reflect a loss of skills or some other enduring consequence of the financial crisis that would constrain the economy’s capacity to grow without generating inflationary pressures.

But in a speech to labor unions Tuesday, Gov. Mark Carney said the central bank had identified a more benign explanation for weak productivity growth, one that may pave the way for strong growth for years to come.

Mr. Carney explained that the U.K. had experienced a “labor supply shock” – essentially, more people have accepted work at real wages below their pre-crisis levels.  Their reasons for having done so were varied: some needed to beef up their pension funds in response to a later retirement age, others needed to reduce high debt levels, some others could no longer rely on less generous government welfare payments.

Whatever their reasons, in Mr. Carney’s view the result was that labor became cheaper and that led businesses to hire additional workers instead of investing in new and better equipment, the result being slower productivity growth.

The productivity puzzle has been solved, and in a way that bodes well for the economy’s future prospects.

“Originally, we thought the major uncertainties were centered on productivity growth,” Mr. Carney said. “But as the Bank’s Monetary Policy Committee (MPC) has seen wages, employment and productivity evolve, we are increasingly of the view that there has been a material labour supply shock.”

Mr. Carney presented this as a unique accomplishment of the British economy, noting that in the U.S., labor force participation rates have fallen. In his view, keeping people in work means they don’t lose vital skills, and is “the best way to ensure that cyclical downturns in aggregate demand for goods and services do not translate into permanent reductions in our economy’s potential to supply them.”

“As a result, Britain has an opportunity, not often seen after a deep recession, to reach and sustain a higher level of employment than in the past,” he said.

Fed Endorses Giving Smaller Banks Reprieve From Dodd-Frank. The Federal Reserve’s top man on banking regulation said “it may be time” for Congress to exempt small and medium-sized banks from certain aspects of the 2010 Dodd-Frank financial law. “It may be time to consider raising some thresholds or eliminating altogether the application of some Dodd-Frank provision to other banks,” Fed governor Daniel Tarullo said Tuesday.

U.S. Bank Regulators Open to Including Munis in Financing Rule. Federal banking regulators said they plan to revisit a decision to exclude municipal securities from a post-crisis rule aimed at ensuring banks have enough cash on hand to survive a crisis, saying they are open to allowing some debt issued by states and localities to count as a “safe” asset. Top officials from the Fed, Office of the Comptroller of the Currency and the Federal Deposit Insurance Corp. told Senate lawmakers Tuesday they would consider altering a rule completed last week that requires banks to hold enough cash or cash-like assets to fund their operations for 30 days. Previously, only the Fed had expressed a willingness to alter the rule.

U.S. Hiring in July Hit Highest Level Since 2007. The number of hires by U.S. employers in July reached the highest level since 2007 and job openings hovered near their highest level in 13 years, the latest sign of improvement in U.S. labor markets, the Labor Department said Tuesday. 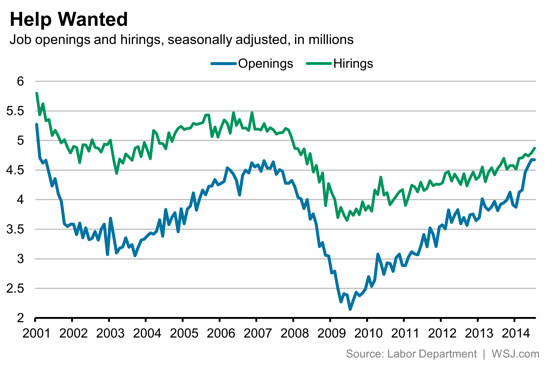 Senators Say Billion-Dollar Settlements Not Enough Punishment For Banks. Lawmakers criticized the Fed and other government agencies for failing to hold individuals accountable for the actions that led to the financial crisis despite reaching record settlements with some of Wall Street’s biggest banks over mortgage misdeeds.

BOJ Buys Government Debt at Negative Yield. Tuesday marked another milestone in the topsy-turvy world of monetary easing in Japan: The Bank of Japan bought short-term Japanese government debt at a negative yield for the first time, according to market participants.

BOE’s Carney Warns Scots Over Sterling. Bank of England Gov. Mark Carney on Tuesday warned Scots that a currency union with the rest of the U.K. would be “incompatible with sovereignty” if they choose to secede in a referendum next week. Mr. Carney’s comments reiterate an argument he set out in detail in a January speech: that successful currency unions require shared institutions and a willingness for member states to surrender a degree of sovereignty.

U.K. Financial Regulator Making Plans for Scotland ‘Yes’ Vote. The U.K.’s top financial regulator says it is working on last minute contingency plans to deal with a possible surge in calls from savers in the event that Scotland votes for independence next week.

ECB To Share Partial Stress-Test Results With Banks. European Central Bank officials in coming weeks will meet with bank executives to share partial results of how their institutions fared in so-called stress tests, according to people familiar with the matter, a process that analysts expect will yield positive news for most lenders.

Australian Economic Data Pose Headache for Central Bank. One set of data showed another big jump in mortgages shelled out to property investors, a trend the central bank has been trying to stamp on to prevent the housing market overheating and potentially crunching the country’s fragile economy. Separate data showed a drop in both business confidence and conditions, undermining the Reserve Bank of Australia’s efforts to get companies investing more aggressively at a time when unemployment is at a 12-year high.

Venezuela Annual Inflation Rose to 63.4% in August.  Venezuela’s annual inflation rate rose to 63.4% in August, the central bank reported late Tuesday, after a monthslong hiatus in releasing consumer-price data. Venezuela’s last published inflation figures in May. Months of delays have lead economists, bond market participants as well as government detractors to accuse the central bank of hiding the data for political reasons, charges the government denies.

The world is running low on zinc, sending some investors scurrying to buy mining-company shares and forcing the U.S. Mint to redouble cost-cutting efforts in search of a cheaper penny. Prices for the metal have soared to three-year highs. 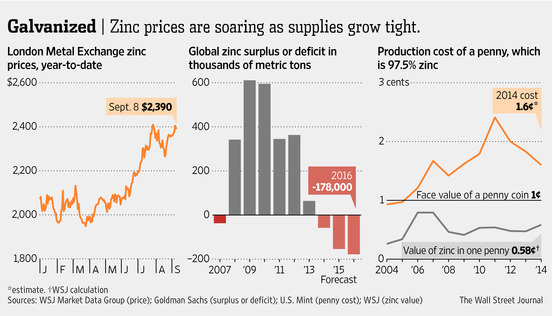 -National Bank of Hungary releases minutes of its Aug. 26 meeting at 1200 GMT

-BOE’s Carney, Shafik, Weale and Miles testify on inflation before the Treasury Select Committee at 1345 GMT

Compared With Earlier Generations, Young Americans Now Far More Saddled With Debt. Today’s young Americans are burdened by debt at a far greater rate than prior generations, new research shows. More than a third of Americans age 24 to 28—or 35%—have debts that exceed their assets, according to research from Dartmouth College assistant professor Jason Houle. That’s roughly double the proportion of their peers in the late 1980s and mid-1970s.

Death of a Reserve Currency. Why did the Dutch guilder, also called the florin, lose its global reserve-currency status in the late 18th century? Stephen Quinn and William Roberds explored the historical episode in a recent working paper from the Atlanta Fed. “The end of currency’s reserve status is a rare event, and the florin’s downfall teaches that preeminence of a central bank does not necessarily guard against fiscal overexploitation or a sudden loss of market confidence.”

Should Mario Draghi Spend More Time on Twitter? Should European Central Bank President Mario Draghi spend more time checking out social media to help him gauge the state of the economy? Two scholars from the Dutch national statistics agency CBS, Piet J.H. Daas and Marco J.H. Puts, argue in a recent paper that following social media might be a faster way for policymakers to gauge consumer confidence that waiting for more conventional surveys.

Stephen Haber and Ross Levine, professors at Stanford University and the University of California, Berkeley say the Federal Reserve needs to be reformed because it is too beholden to banks. “While the Fed is largely independent of politicians, it is intimately connected, and even answerable, to the financial institutions that it is supposed to regulate,” they argue. Among their concerns, they say information is dribbling out of the Fed from unofficial channels and benefitting select investors. The professors propose three reforms: 1) Reduce the number of bankers on regional Fed bank boards; 2) Force Fed officials to agree to a waiting period of five years after leaving the central bank before working for a financial firm; 3) Congress should establish overseers of the Fed’s bank supervision practices with the authority to demand information from the central bank and assess its performance.

There is no European version of Abenomics yet, “but Mario Draghi, president of the European Central Bank, pretty much advocated it in his press conference last week,” Greg Ip writes for The Economist. “Europe, he said, needs fiscal, monetary and structural policy working together, the three arrows of Abenomics. He acknowledged the ECB’s duty of getting annual inflation, now 0.3%, back up to its target of near 2%. But the ECB, he said, can’t rescue Europe alone: it needs help from fiscal and structural reforms. … But the ECB can help determine whether either of those things succeeds. For Europe’s fiscal and regulatory policy makers to do their jobs, it will help immensely if the ECB does its own.”

It might be time to re-embrace subprime lending, Binyamin Appelbaum writes for the New York Times Magazine. “Long before these risky loans were blamed, in part, for helping usher in the financial crisis, subprime lending was embraced as a promising antidote to the excessive caution of mainstream lenders. After all, key mortgage rules were first written in the middle of the last century, and they still reflect old-fashioned economic assumptions.”

-Malawi’s central bank on Tuesday kept its policy interest rate unchanged at 22.5% and said in a statement that “despite the positive developments to date, some risks still remain to the inflation outlook.”

-The rate of unemployment across the 34 nations that are members of the Organization for Economic Cooperation and Development rose in July to 7.4% from 7.3% in June.

-Ardian Fullani, governor of Albania’s central bank, was arrested late last week in connection with the theft of 713 million leks ($6.6 million) from the bank, the Associated Press reported.

-France lowered its growth forecast again on Wednesday and warned it will need more time to bring its public deficit in line with European Union rules.