Ask WSJ Central Banks: Dear readers, we are launching a new feature in response to the many questions we have received from you privately. Please email your queries about the Fed, other central banks or broader economic topics to this address and we will select a few to answer publicly on a regular basis. Help us get started by sending them here: askcentralbanking@wsj.com 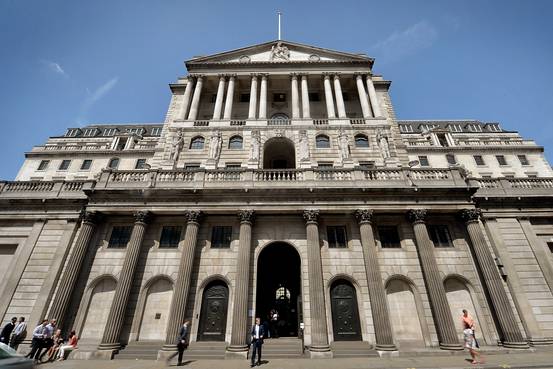 After months in the deep freeze, the debate over when to raise interest rates at the Bank of England is heating up.

Minutes of the Monetary Policy Committee’s July meeting imply that if it wasn’t for the debt crisis in Greece, which had reached fever pitch when the panel met in the days leading up to their decision July 8, then two or three officials would have come within a whisker of voting to lift the BOE’s benchmark rate from its 0.5% low.

The number of potential dissenters is signficant. For months there have been only two rate-setters hinting that they were soon likely to break ranks and push for higher borrowing costs.

The BOE doesn’t identify potential dissenters in the record of its policy deliberations. The most likely hawks are Ian McCafferty and Martin Weale, who have been moving closer to voting for a rate rise for months, and David Miles, who signaled his more-recent conversion to the looming need for higher borrowing costs in a speech this month. Kristin Forbes is another possibility.

Meantime, Mark Carney, the BOE’s governor, in a speech of his own last week said that he thought the arguments for and against a rate rise will come into sharper relief at around the turn of the year, a statement that for the first time put a potential timeframe for liftoff firmly into the public domain.

The question investors must grapple with now, though, is whether Mr. Carney’s view still chimes with the majority opinion on the nine-member committee, or whether the center-ground is shifting towards an earlier move on rates. 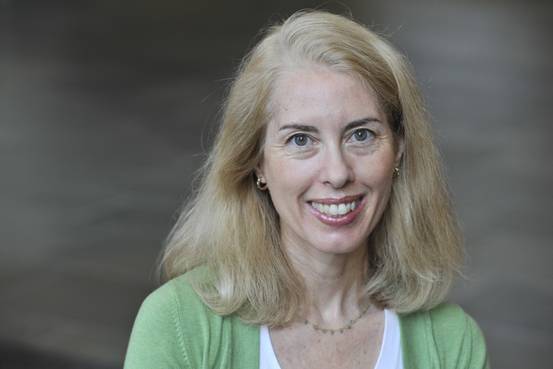 Senate Panel Chief Shelby in No Rush on Fed Board Nominees. Senate Banking Committee Chairman Richard Shelby (R., Ala.) said Tuesday he had no immediate plans to schedule confirmation hearings for University of Michigan economist Kathryn Dominguez, whose nomination was announced Monday, or former Bank of Hawaii Chief Executive Allan Landon, whom President Barack Obama nominated in January. The lack of urgency could mean neither nominee would be confirmed in time to attend the Fed’s Sept. 16-17 policy meeting, when many economists expect the U.S. central bank will begin raising short-term interest rates from near zero.

Highway Funding Bill Sees Cut in Fed Dividend Payment. Senate Majority Leader Mitch McConnell (R., Ky.) released draft legislation Tuesday that would offset new highway spending, in part, by reducing the dividend the Fed’s regional reserve banks pay on stock private-sector banks are required to hold as members of the Federal Reserve system. The provision, which would lower the dividend to 1.5% from 6% for banks with more than $1 billion in assets would cover about a third of the cost of three years of highway spending—roughly $16 billion.

House Republican Proposes Fed Policy Rule. A House Republican has unveiled another legislative proposal to curb the Federal Reserve’s powers, the latest in a spate from lawmakers on both sides of the aisle. A draft bill from Rep. Bill Huizenga (R., Mich.) would force the central bank to adopt an explicit policy rule, require the Fed to disclose more details about its bank stress tests and change the manner in which the Fed is audited. 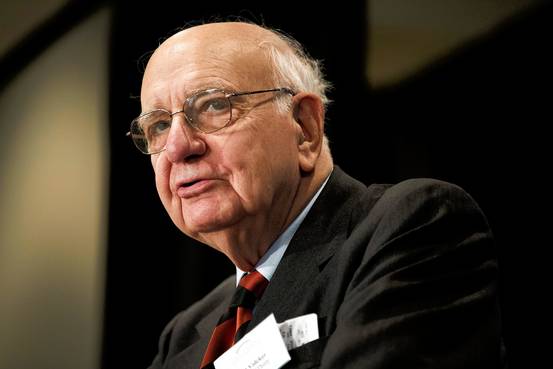 Volcker Bank-Risk Rule Set to Start With Little Fanfare. Starting Wednesday, Wall Street banks had to comply with perhaps the most significant new restriction on their activities since the aftermath of the Great Depression. It was greeted with a shrug. The Volcker rule, the 953-page regulation banning taxpayer-insured banks from making bets with their own money, arrived with little fanfare, showing how much Wall Street has changed since Congress ordered regulators to write it as part of the Dodd-Frank financial law five years ago.

As Commodities Tumble, Asia-Pacific Economies Grasp for Growth. The swift decline of prices for commodities exposes how some Asia-Pacific economies reliant on those exports have struggled to find new sources of growth. The Fed’s plans to raise interest rates later this year, coupled with a resurgent U.S. dollar, sparked the current rout in commodities prices. 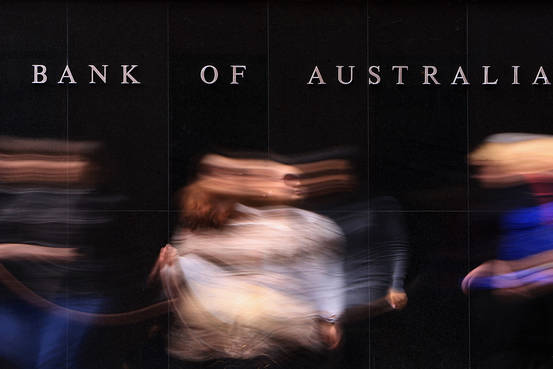 Australia Central Bank Open to Rate Cuts, Mindful of Risks. Australian central bank Gov. Glenn Stevens said cutting interest rates further remained an option while adding that to keep on lowering would at some point invite danger to the economy.

Hungary’s Central Bank to Maintain Loose Monetary Policy. Hungary’s central bank plans to pursue a loose monetary policy for the coming years and keep interest rates at very low levels, the head of the National Bank of Hungary said Tuesday. Gyorgy Matolcsy made the dual policy announcement after the bank cut the benchmark policy rate to a new record low of 1.35% from 1.50%.

Mobile Banking Struggles to Gain Traction in Indonesia. An electronic money program is part of a government effort to extend financial services to the unbanked — roughly 60% of Indonesia’s 250 million people.  Indonesia’s central bank first launched a regulation governing the program in 2009 and revised it in 2014, but it has struggled to take off because regulatory restrictions have prevented who can participate, and banks have not invested in expanding it.

Oil-Sensitive Currencies Hit by Commodity Slump. Tumbling oil prices are weakening the currencies of major oil-exporting countries for the second time in a year. Currencies in Norway, Canada, Russia and Nigeria have fallen sharply against the U.S. dollar this month on oil-price declines, after having already stumbled late last year. In the past month, oil has slipped as a result of a strong U.S. dollar, slow global growth — especially in China — and a supply glut. 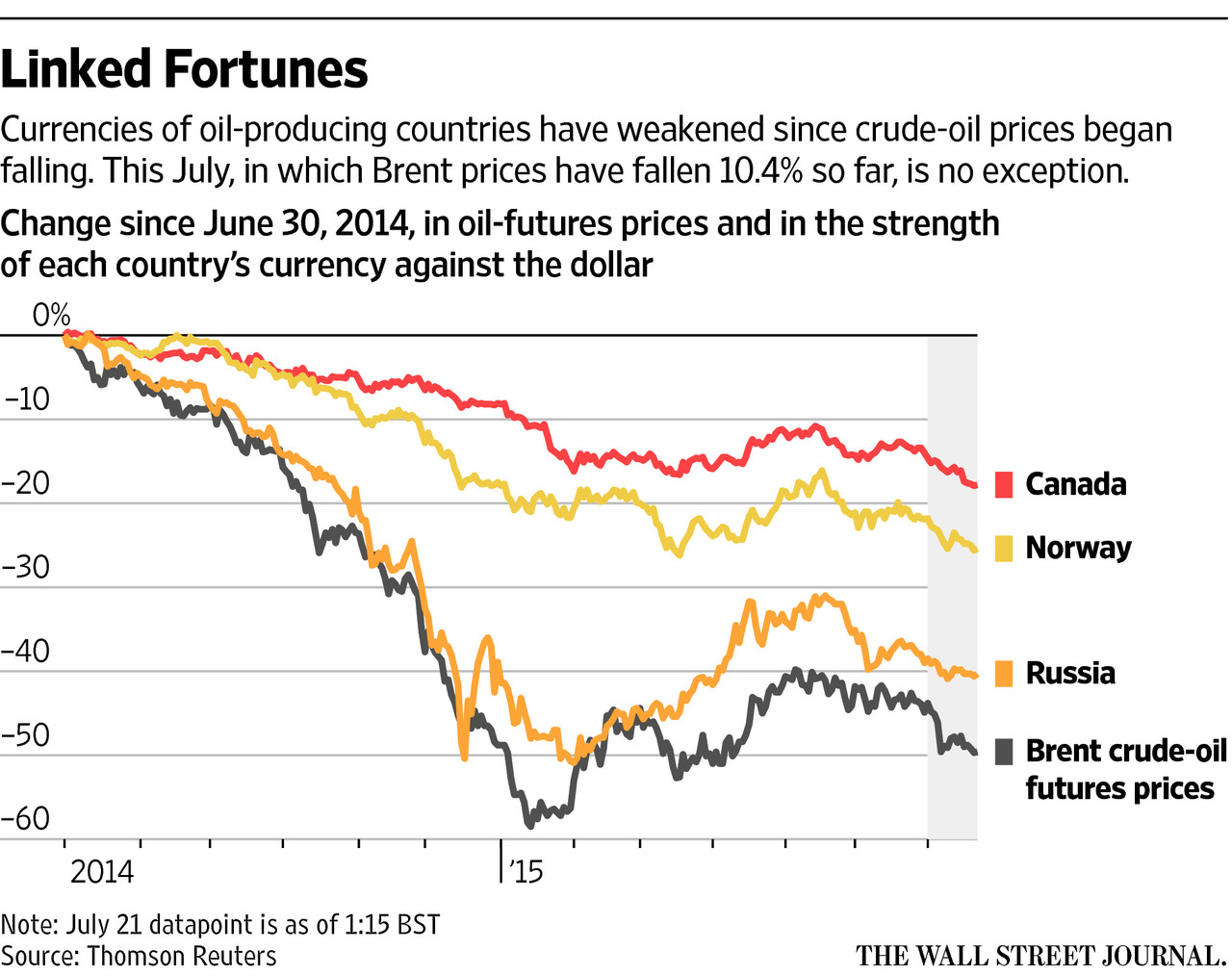 San Francisco Fed: Weak Inflation Not The Conundrum Many Believe. The Federal Reserve’s failure to get inflation back up to desired levels for nearly three years isn’t the problem many people believe it to be, according to new research from the San Francisco Fed. U.S. inflation, by the Fed’s preferred measure, has run under its 2% target for more than three years. In a note published Monday, bank economist Kevin Lansing wrote this “does not yet signal a statistically significant departure from the target after accounting for the ever-present volatility of monthly inflation readings,” adding “recent inflation behavior departs only mildly from earlier patterns.”

Greece’s Imperfect Imperative. “Greece and its creditors are now enacting a deal that provides financial support in exchange for wide-ranging reforms. Although reservations about the agreement abound, political conditions did not permit a better one,” Lucrezia Reichlin, Elias Papaioannou and Richard Portes write in a Project Syndicate column. “But the deal can – and must – serve as the basis for saving Greece and the eurozone.”

Will The Dollar Foil the Fed’s Rate-Hike Plans? “Needless to say, just when certainty abounds about the direction of Fed policy, new variables are introduced to keep up on our toes. So, once again, the need for vigilance is high,” Ron Insana writes on CNBC.com. “A strong dollar and falling bond yields may be telling the Fed a different story than it wants to hear.”

–New Zealand’s central bank is widely expected to cut interest rates again on Thursday, as dairy prices continue to sour and weak inflation remains a risk. All 16 economists polled by The Wall Street Journal anticipate that the central bank will cut the benchmark cash-rate target on Thursday by at least 25 basis points to 3%. Only one of them is openly predicting the rate will sink to 2.75%, though several acknowledge the possibility–Dow Jones Newswires.

–With the U.S. housing market in its fourth year of recovery, construction of single-family homes and multifamily rentals is rebounding. Not so for condo construction, which has been slammed by tough rules on condo mortgages enacted after the housing bust as well as stronger demand among young people for rentals and tight lending conditions for builders.

–California added 23,000 jobs in June, the Labor Department said Tuesday, the second-largest increase in jobs of any U.S. state, making it one of a dozen states whose unemployment rate has fallen by more than a percentage point over the past year.

–Hungary’s parliamentary economic committee on Wednesday approved the nomination of Marton Nagy to the post of central bank vice governor, a move required before the country’s president can appoint him to the role–Dow Jones Newswires.