Investors spend a great deal of time discussing when the Federal Reserve will begin raising short-term interest rates. But how about when it will stop raising them? A Federal Reserve Bank of New York survey of bond dealers shows Wall Street firms see the Fed beginning a cycle of interest rate increases in the third quarter of 2015 and ending it by the second half of 2017 when the Fed’s benchmark short-term interest rate has reached 3.5%.

The survey of 22 bond dealers that trade securities with the Fed is conducted ahead of every U.S. central bank policy meeting and the results are released after minutes of the meeting are released. The latest survey shows that expectations are shifting on Wall Street toward a slightly earlier start for rate increases and, importantly, an earlier end as well. In the Fed’s January survey, bond dealers saw the central bank starting to increase rates in the fourth quarter of 2015. Then they saw the Fed continuing to push rates up to 3.75% by the first half of 2018 and on to 4% in the long-run. These projections are based on the median of their collective responses. They were made before strong job market data were released by the Labor Department last week.

The shifting long-run rate expectations are connected to changing expectations for the broader economy. Because the economy appears to be on a slower growth path, dealers see the Fed keeping rates lower in the long-run. “Some dealers noted their expectation for a lower longer run federal funds rate as being driven by their perception of lower potential GDP growth,” The Fed said of the results.

The survey puts Wall Street expectations for rates in the long run a bit below the Fed’s own expectations. Fed officials surveyed at the last policy meeting saw rates at 3.75% in the long-run, down from 4% when surveyed in December.

Fed’s George Sees Room For Rate Hikes This Year. Kansas City Fed President Esther George said Thursday there are signs the Federal Reserve should raise interest rates as early as this year, noting positive developments in the labor market and inflation rates closer to its 2% target. In recent remarks Ms. George has said the Fed should start increasing short-term interest rates soon after its ends its bond-buying stimulus program later this year.

Fed’s Fischer Supports Fed’s Regulatory Agenda. In his first speech since joining the central bank, Federal Reserve Vice Chairman Stanley Fischer praised its stress-testing program for banks and new requirements that big banks hold higher levels of loss-absorbing capital, throwing in his lot with other Fed officials in backing two pillars of the Fed’s response to the financial crisis.

Partisan Divide Over Fed on Display in House Committee Hearing. The polarization of American politics now extends to the issue of whether interest rates should be determined by mathematical formulas. The House Financial Services Committee on Thursday discussed a bill that would, among other things, require the Fed to adopt a formal rule to guide monetary policy decisions to tighten or ease credit. Republicans support the bill, while Democrats oppose it.

Some officials at the European Central Bank are growing wary of the rise of the complex computer programs that are proving an increasingly popular way for investors and others to trade currencies.

French Economy Minister: ECB Asset Purchases Seem Unavoidable, Inevitable. Arnaud Montebourg’s remarks came after he called on the European Central Bank to buy public assets to drive down the euro and fuel an economic recovery. Mr. Montebourg has been a vocal critic of the ECB in the past, arguing that its policies have kept the euro high and hurt the French economy by making exports more expensive.

Nowotny Sees No ECB Urgency for Action as Stimulus Bites—Bloomberg News. The European Central Bank’s newest stimulus package has had an impact on markets and there is no urgency to take additional steps, according to Governing Council member Ewald Nowotny. “I do not see a need for further action in the near future, at least not in the field of monetary policy,” he said in an interview in London.

Global Markets Broadly Calmer Despite Concerns Over Major Portuguese Lender.  Concerns over a major Portuguese lender continued to reverberate Friday, with one of the country’s industrial conglomerates shelving the stock listing of its African arm and some higher risk bond issues being put on ice, but global markets were broadly calmer.

U.S. Says It Won a Victory in China Currency Battle. Did It?. The U.S. Treasury Secretary and his top aides left Beijing last night thinking they had a won big battle in their effort to get China to strengthen the value of the yuan. China had agreed to reduce intervention in its currency markets to “what are really extraordinary circumstances,” Treasury Secretary Jack Lew told reporters in a briefing at the end of the two-day Strategic and Economic Dialogue before he jetted home.

PBOC Reviewing Cross-Border Yuan Business. China’s central bank said late Thursday that it is looking into a media report on cross-border yuan business, according to official Xinhua News Agency. The People’s Bank of China didn’t name the target of the review or the media source, but the announcement came after a China Central Television report on Wednesday accused Bank of China Ltd. of helping clients skirt the country’s controls on cross-border fund transfers and laundering money.

BOE Considers Stricter Leverage Limits For UK Banks. Britain’s biggest banks could be subject to stricter leverage limits under proposals put forward Friday by the Bank of England. The BOE said in a consultation paper on leverage that its Financial Policy Committee, which spots risks to the financial system, intends to ask the government to grant it new powers to cap bank leverage sooner than intended.

Even Finance-Conscious Consumers Spend Swiftly After Payday. Americans step up their spending after payday—no surprise—but it’s not because the cash is burning holes in their pockets, a new study found. In a paper to be published Friday in Science, researchers found that close to half of increased spending in the days after Americans receive pay or benefit checks comes from recurring payments such as rent or mortgage bills. In contrast, spending on fast-food or coffee treats increased only modestly in the few days after Americans are paid. 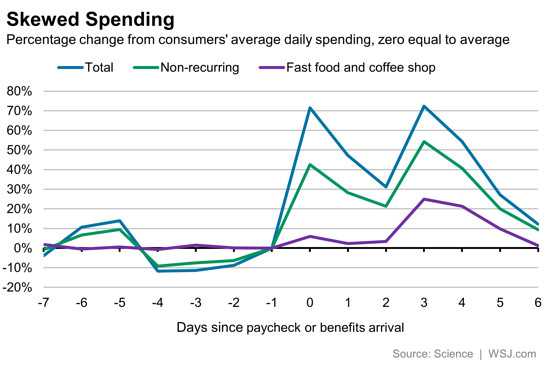 ECB Puts Numbers On Gains From Economic Reforms. European Central Bank President Mario Draghi made a bit of a splash Wednesday by calling for new rules at the European level to ensure that euro zone members enact deep reforms to make their economies more competitive. On Thursday, the ECB added some specifics on just how much of an impact reforms to product and labor markets would have on the euro zone’s gross domestic product.

The Federal Reserve is concerned investors are too complacent and may be taking on too much risk, echoing recent comments from the European Central Bank and the Bank of England, writes Mark Gilbert in Bloomberg View. “The thing is, not only are central banks the perpetrators of the death of volatility, they are the knowing architects of the accompanying surge in asset prices.”

– Germany warned Thursday that its economic growth rate slowed in the second quarter because of the Ukraine-Russia conflict and an unusually weak seasonal pick-up this spring, but it stressed that the economy’s overall upward trend was intact.

– Sweden’s consumer price index rose for the first time in six months in June, data showed Thursday, taking some pressure off the embattled central bank, which took the ax to its main interest rate last week to boost inflation.