Bank of England Gov. Mark Carney on Thursday recalled arriving in the U.K. in 1988 as a fresh-faced Harvard graduate pursuing studies at Oxford University. He was walking right into the tail-end of a euphoric housing boom that turned to painful bust and worsened an early 1990s recession.

Now he’s trying to avoid a repeat, in a test case for the rest of the world. The BOE’s Financial Policy Committee, which safeguards the stability of the financial system, has tightened lending standards to see off the risk of another debt binge by British homebuyers. Mr. Carney explained the measures in a press conference presenting the U.K. central bank’s twice-yearly Financial Stability Report.

On the face of it, the measures were modest. Lenders were told to extend no more than 15% of new loans to buyers who wished to borrow more than 4.5 times their income. Would-be homeowners must also go through stricter checks to ensure they can repay mortgages when interest rates rise.

Such high loan-to-income mortgages are relatively rare, except in England’s wealthy southeast. Banks are already making more probing inquiries into borrowers’ finances than in the freewheeling days before the global recession.

The pressing question is whether these steps keep a lid on risky lending and cool a real-estate market that, by some measures, is already in danger of overheating. Average property prices have surpassed their prerecession peak despite lackluster growth in incomes; prices in the capital have been rising at an annual rate close to 20%.

The BOE has other weapons in reserve to further tighten the screws on real estate if needed, including higher capital requirements for lenders and still-stricter hurdles for borrowers.

The big stick—higher interest rates—will be the last line of defense, officials insist. The BOE, like the Federal Reserve and other central banks, is wary of using monetary policy to tackle asset-price inflation and financial excesses for fear of derailing a still-fragile recovery. Officials nonetheless acknowledge that tighter monetary policy may one day be the only option there is when trying to ensure stability.

Rates May Rise Even If Economic Growth Remains Subdued. The Fed is likely to begin raising interest rates next year even if the U.S. economy doesn’t experience a substantial acceleration in growth, Richmond Fed President Jeffrey Lacker said Thursday.

Fed’s Bullard: Time to Tighten Monetary Policy Nearer Than Many Expect. St. Louis Fed President James Bullard said Thursday that an improving economy and rising price pressures mean the U.S. central bank is getting closer to the time when it will need to raise short-term interest rates.

BOE Tightens Mortgage-Lending Rules. The Bank of England tightened mortgage-lending rules in the U.K. Thursday to prevent too many homebuyers taking on too much debt, underscoring officials’ growing concern that a booming housing market may one day pose a risk to Britain’s economy.

BOE Warns of Complacency on Liquidity Risks. The Bank of England worries that a decline in liquidity in some financial markets over recent years may exacerbate a fall in market prices should investors turn out to have underestimated the impact of a normalization of monetary policy, or encounter some unforeseen shock. The BOE is likely to be the first major central bank to push its benchmark interest rate higher.

BOE Questions Fall In Euro-Zone Bond Yields. The BOE appeared unconvinced that the rapid fall in spreads on bonds issued by governments in what is known as the euro zone’s ‘periphery’–which includes a large number of its members–is warranted and sustainable, according to its twice-yearly Financial Stability Report.

Euro-Zone Mood Worsens Despite ECB Policy Shift. The European Central Bank’s new measures to boost growth and the inflation rate across the euro zone seem to have inspired little fresh optimism among businesses and households about the single-currency area’s economic prospects. A European Commission survey released Friday recorded a decline in confidence during June.

Japan Jobs Market Improves, Inflation Slows. Japan’s job market showed strong signs of improvement in May, with one indicator rising to the highest level in nearly 22 years, underscoring continued progress in Prime Minister Shinzo Abe’s efforts to put the economy on a solid growth path. Meanwhile, inflation in Japan slowed slightly in May, in line with the Bank of Japan’s view that the pace of price growth will ease over the summer months before picking up again later in the year.

After Tax Increase, Signs of Recovery in Japan Consumption. Japanese private consumption showed signs of recovery in May after it plunged on April’s sales-tax rise, an encouraging sign for Prime Minister Shinzo Abe’s push to lift the economy out of its long funk. Retail sales rose 4.6% on-month in May, the Ministry of Economy, Trade and Industry said. Compared to a year earlier, sales were down 0.4%.

With Job Market Tight, Japan Firms Get Creative to Find Workers. Economists hope the recovery in Japan will force firms desperate for workers to raise wages, creating more and more momentum in the economy. Yet some firms that remain cautious about offering higher pay are trying to win the battle for labor using more creative, cheaper options.

Brazil’s Central Bank Sees Slower Inflation, But Dims Growth Outlook. Brazil’s central bank on Thursday released its quarterly economic analysis, downgrading its growth outlook for this year and forecasting slower, though relatively high inflation into 2016. The report was the bank’s first since monetary authorities in May halted a series of rate increases in recent months, keeping key interest rates unchanged for the first time since April 2013.

Canada Banking Regulator Continues to Sound Alarm over High Household Debt. The comments come even as new data show that credit growth is slowing in Canada and consumers are starting to pay off their liabilities.

Czech Central Bank to Maintain Weak Koruna. The Czech National Bank said Thursday it will maintain its nonstandard policy of keeping the koruna weak at least through next April, clarifying its earlier unspecified goal for a possible exit from the currency regime sometime in 2015, and will delay tightening interest rates from near zero levels well into the future.

Bank of Thailand Hopeful for Economic Recovery. Thailand’s central bank is hopeful that the country’s economy will return to normal in 2015 given the greater clarity in the political situation as a result of the May 22 coup. The recovery in the export sector remains slow however and exports are unlikely to help boost growth soon.

A key measure of consumer inflation has accelerated in recent months, a development that could influence the Federal Reserve’s calculus for raising short-term interest rates. The price index for personal consumption expenditures — the Fed’s preferred gauge — advanced 1.8% in May from a year earlier, the Commerce Department said Thursday. That was the highest level since October 2012 and a stark pickup from February when annual inflation stood at just 0.8%. 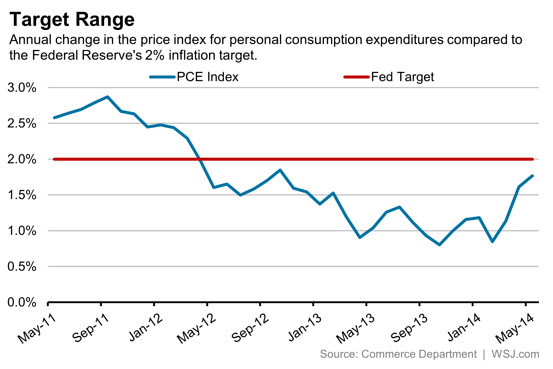 Slowdown in Emerging Markets: Not Just a Hiccup. Emerging market economies have been experiencing strong growth, with annual growth for the period 2000-12 averaging 4¾ percent per year. Is the recent slowdown just a hiccup or a sign of a more chronic condition? Economists at the IMF looked at the factors behind this strong growth performance.

Keiko Tashiro, who was approved Thursday as Daiwa’s first female executive managing director, talked with the Journal about how the role of working women in Japan has changed over the past 30 years. Her comments come after Prime Minister Shinzo Abe pledged to create a more flexible working environment for women and promote women in leadership roles.

Michael O’Rourke, chief market strategist at JonesTrading Institutional Services, is frustrated by the markets, according to a research note. Stocks are near record levels, but at the same time the economy isn’t exactly firing on all cylinders. As Mr. O’Rourke points out, the S&P 500 is still up about 4% since the initial first-quarter GDP estimate was released last month. “The complacency within markets is at an extreme where only the positive implications are priced in.”

– The official unemployment rate fell in May in Brazil’s two largest metropolitan areas of Sao Paulo and Rio de Janeiro, though the figure for whole country isn’t available because of an ongoing strike by employees of the Brazilian Institute of Geography and Statistics – Dow Jones Newswires