The Wall Street Journal’s Daily Report on Global Central Banks for Wednesday, May 28

“The case that 2% turns out to be too low a[n inflation] target is quite compelling,” Nobel-winning economist and New York Times columnist Paul Krugman speaking at a European Central Bank Conference.

The case for higher inflation targets, Mr. Krugman argued, is “quite compelling.”

Not so compelling, actually, when you make the case to a central banker. ECB President Mario Draghi raised an obvious political roadblock to Mr. Krugman’s case. The public might not want the inflation Mr. Krugman deems economically optimal. “What would it mean for a German, for example, to have a 5% objective in the whole of the euro area?” Mr. Draghi asked. “I don’t even want to think [about] that.”

Fed officials, too, are uninterested in entertaining the idea. Their main gripe is they don’t want to sacrifice their credibility. Having just established a 2% target in 2012, do they really want to be switching it? Former Fed Chairman Ben Bernanke saw it as an achievement that the public’s expectations about future inflation remained steady through the turmoil of 2008 and its aftermath. Changing the inflation goalposts could be one more source of destabilizing uncertainty for a public, business sector and markets that have had their fair share.

There is another more practical hitch to the Krugman argument. Inflation in the U.S., Euro-area and Japan has been running below each central bank’s objective for an extended period. Maybe someday they can have a discussion about making those inflation goals even higher. Before then they need to show they can reach the modest targets they’ve already established. They’ve got tools to work with: Securities purchases that pump money into the financial system and promises of future low short-term interest rates which help to hold long-term interest rates down.  The real challenge for central banks today is testing the limits of those unconventional tools. Everything else is academic.

Draghi Says ECB Aware of Risks From Low Inflation. The European Central Bank is aware of the risks associated with too long a period of ultralow inflation, the bank’s president Mario Draghi said Tuesday, though he said he was confident that the ECB has the tools to push consumer-price growth higher. “We are confident we will deliver the close to 2%, but below 2%, objective,” Mr. Draghi said, referring to the ECB’s medium-term target.

ECB Mersch: Easing Couldn’t Be Single Measure but a Combination. Yves Mersch, a member of the ECB’s executive board, Wednesday said any easing of policy would have to be a combination of measures. In a speech, he said that if the benchmark refinancing rate were to be cut, the deposit rate would have to be cut too, bringing it into negative territory. Dow Jones Newswires

At ECB Conference, Krugman Attacks Inflation Target. Major central banks generally target annual inflation rates of around 2%. Princeton University economist Paul Krugman thinks that’s far too low. He dismissed what he called the “mysterious doctrine” of a 2% inflation target. “The case that 2% turns out to be too low a target is quite compelling,” he said.

Mexican Central Bank Chief Warns of Spillover Effects of Dramatic Monetary Policies. Agustin Carstens, governor of Mexico’s central bank said Tuesday he supports the dramatic measures central bankers in advanced economies have taken to stabilize their economies, but emerging markets must be mindful of the spillover effects these policies may have. “The unconventional monetary policies have…established the ground for a recovery in economic activity,” he said at the ECB conference in Portugal. “I’d rather have them than not,” he said.

ECB Policy Clues and Inflation Target Debate. Here are a few takeaways from the ECB conference in Portugal (besides the singing waiters at Monday’s dinner who stole the show by serenading ECB President Mario Draghi and other top policymakers with classics including “We Are the World” and Sister Sledge’s “We are Family”).

Bank Lending to Euro-Zone Businesses Falls Again. Bank lending to euro-zone businesses fell in April, marking nearly two years of declines and indicating that a scarcity of credit is still a drag on the currency area’s weak economic recovery.

BOE’s Carney Tells Bankers to Clean Up Their Acts. Bank of England Gov. Mark Carney said Tuesday the misdeeds of the financial sector risk undermining public support for free markets and called on bankers to radically improve their behavior, a sign of simmering frustration in policy circles over a string of misdemeanors. Mr. Carney said recent scandals in currency and commodity markets highlight “a malaise in corners of finance that must be remedied,” saying such “corruption” has hurt trust in modern capitalism, according to the text of his speech.

Fed Still Short of Employment, Inflation Goals, Lockhart Says. The Federal Reserve must be patient before it considers raising interest rates after it winds down its bond-buying program and as the recovery picks up steam, Atlanta Fed President Dennis Lockhart said Tuesday. “A combination of a shortfall from full utilization of our nation’s labor resources and inflation below the FOMC’s longer-term objective would, in my view, justify patience in raising policy rates,” he said in Baton Rouge, La.

RBI’s Rajan Worried End of Easy Money Policies Could Hurt Emerging Markets. While India may be back in favor with international investors thanks to hope a business-friendly government is now in charge in New Delhi, Reserve Bank of India Governor Raghuram Rajan says he is worried about what is happening outside of the country.

Poland Remains Reserved on Euro Adoption, Says Finance Minister. Poland remains reserved about adopting the euro, its finance minister said in an interview Tuesday, despite suggestions that euro-zone membership could offer added security amid concerns about potential Russian aggression. Mateusz Szczurek said Tuesday that Poland would consider joining the European single-currency area when the country thinks the move will benefit the economy and won’t threaten its financial stability.

Brazil’s Lasting Inflation Raises Fears of Out-of-Control Prices. The man who once said a little inflation for Brazil is akin to a little sip to a recovering alcoholic is worried consumer prices may already be getting out of control. “Our neighbors were victims of the same vice,” former central-bank President Gustavo Franco said Monday in an exclusive telephone interview, referring to Argentina and Venezuela, where inflation is well into the double digits. Once consumer-price indexes get to “10% to 15%” it becomes “a slippery terrain,” and Brazil isn’t too far from that mark, he said just days before a meeting of Brazil’s central bank, which is expected to announce Wednesday it has stopped raising interest rates.

Brazil’s Economy Seen as Having Been Weak in First Quarter. A combination of weak industrial production, tepid investment and low consumer and business confidence in Brazil likely undermined growth in the first quarter for Latin America’s largest economy, according to analysts. A survey of 12 economists by the Wall Street Journal shows expectations that Brazil’s economy barely grew in the first quarter from the previous three months.

China’s Property Slump Worsens. China’s property slump is deepening despite growing government efforts to give home sales a lift, adding to concerns over the health of the world’s No. 2 economy. Cities ranging from Tianjin in the north to Nanning in the south have eased government restrictions on home buying and lending for purchases in recent weeks. The central government is also helping, entreating banks this month to lend more.

Oliver Harvey and George Saravelos of Deutsche Bank argue that a breakup of the sterling area the wake of a vote for Scottish independence would be “truly unprecedented,” and the only credible option would be a newly negotiated currency union. “However, as the eurozone crisis demonstrates, a badly designed currency union could be exceptionally costly,” they write.

Americans are putting their mortgages ahead of their credit cards when they pay the bills, reversing an unusual pattern that had developed after the housing bust. The data also show that before, during and after the crisis, Americans are most likely to make their car payments first. 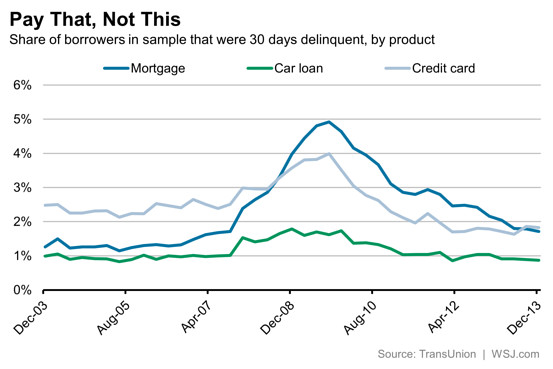 -Brazil’s central bank decides on interest rates, and is expected to end its year-long series of rate increases.

-A big Pentagon order for nuclear submarines last month helped offset a broader drop in demand for big-ticket factory goods, the latest turbulence for the U.S. economy as it tries to pull out of its winter dive.