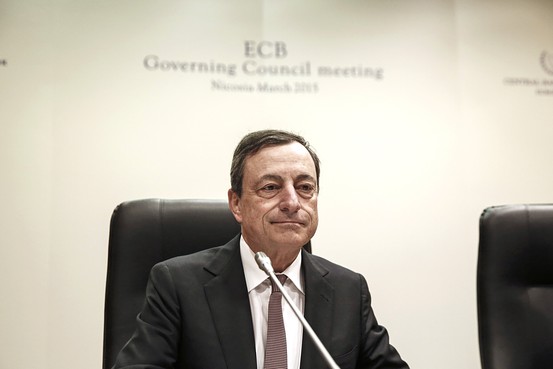 Mario Draghi had some good news to deliver Thursday: the eurozone economy is on the mend despite ultra-low rates of inflation.

“Our monetary policy decisions have worked, and it’s with a certain degree of satisfaction that the Governing Council has acknowledged this,” Mr. Draghi said at his post-meeting press conference Thursday. “The market reaction to the announcement, the expectation first and the announcement second, of our asset purchase program has also been quite effective and quite positive.”

Mr. Draghi’s optimism, and the pat on his own back, seemed justified. The euro bloc looks poised to accelerate from last quarter’s 1.4% annualized growth rate, led by Germany. The euro has weakened to 11-year lows against the U.S. dollar largely due to the ECB’s quantitative easing program that was announced in January. That should boost exports.

Still, Mr. Draghi didn’t go overboard. After all, excessive optimism could have undermined expectations that the ECB will fully execute the EUR60 billion monthly bond purchases through September 2016.

“We see absolutely no reason to think or plan or act from any other way than we’ve planned: €60 billion [in monthly bond purchases] until September 2016 or beyond,” he said.

He put the onus back on governments to reform their labor markets and make it easier for businesses to channel abundant ECB credit to the economy.

But there are reasons for caution on Europe, Mr. Draghi’s upbeat message notwithstanding. The eurozone still hasn’t recouped the output lost during the global recession of 2008 and 2009. And the ECB’s upbeat forecasts would still leave growth lagging far behind the U.S.

And as IHS Global Insight economist Howard Archer pointed out, growth of around 2% isn’t so good when you consider the massive stimulus hitting the eurozone from sharply lower oil prices, a plunging euro and a EUR1 trillion-plus stimulus package from the ECB.

“You could argue that (the ECB’s forecasts) are pretty tepid given the amount of stimulus,” Mr. Archer said. However, “these days in the eurozone, you’re grateful for any growth you can get.”

Big U.S. Banks Pass Fed Stress Tests. The 31 largest U.S. banks are strong enough to keep lending during a severe recession, the Federal Reserve said Thursday, a sign that many will soon get permission to return profits to investors by raising dividends or buying back shares. The annual “stress test” of banks’ financial health found they all had enough capital to continue lending during a hypothetical economic shock. The exams are designed to ensure large banks can withstand severe losses during times of market turmoil without a taxpayer bailout.

Fed’s Williams: Ready to Consider Rate Rises Starting This Summer. Federal Reserve Bank of San Francisco President John Williams on Thursday expressed confidence that robust economic growth and healthy job gains would push inflation up over time. Speaking in Honolulu, the official reiterated that this positive outlook for the economy means that the Fed is getting closer to the day when it can raise short-term interest rates. Such an action would amount to reducing the amount of stimulus the central bank is providing, rather than a switch to policy designed to slow the economy’s momentum, he said.

ECB Raises Economic Forecasts for Eurozone Ahead of Stimulus Program. The European Central Bank significantly raised its economic forecasts for this year and next in a sign of confidence that Europe is gaining strength even before the bank launches its big bond-buying program stimulus program. The ECB also announced it would start buying government bonds of eurozone countries, as well as debt issued by European institutions on Monday.

–Five takeaways from the news conference.

–A recap of the news conference via our Live Blog.

U.K. Consumers Expect Inflation to Slip Further.  The Bank of England’s quarterly survey of inflation expectations in the U.K., carried out by pollsters GfK NOP, found Britons expect annual inflation of 1.9% next year, compared with expectations of a 2.5% rate when they were last polled in November. 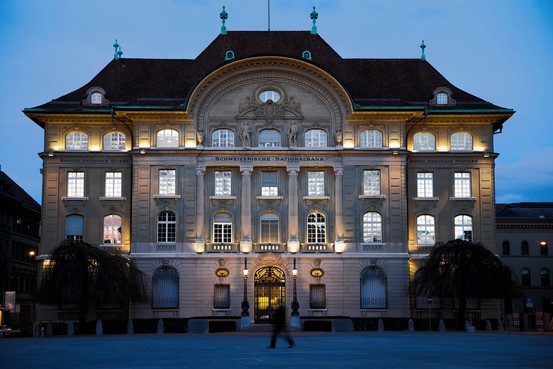 SNB Says Repeal of Currency Cap Could Hit Its Performance. Switzerland’s central bank Friday warned its repeal of a cap on the country’s currency and market volatility could threaten its performance this year, jeopardizing customary payments to the federal and regional governments, as it confirmed it had swung to a profit in 2014.

Turkish Officials Seen Stoking Currency Crisis. Turkey’s government is seen to be stoking a currency crisis that is driving the lira lower, amid concerns over the central bank’s independence.

Philippine Central Bank: Monetary Policy Remains Appropriate. The Philippine central bank said Friday it doesn’t see any need to adjust monetary policy even as other Asian central banks lower key interest rates to stimulate economic growth. Bangko Sentral ng Pilipinas Deputy Gov. Diwa Guinigundo told reporters that he doesn’t see any need to reduce policy rates because the economy is growing at a good pace and inflation is still at the lower end of the 2%-4% target range of the central bank this year, even with a slight increase in February – Dow Jones Newswires.

Big U.S. Firms Finally Start to Ramp Up Spending. Large companies across the U.S. are gearing up to improve tactical radio systems, expand distribution centers, produce more crackers and refurbish hotel rooms—all signs of increased business investment that could give another boost to the strengthening U.S. economy. 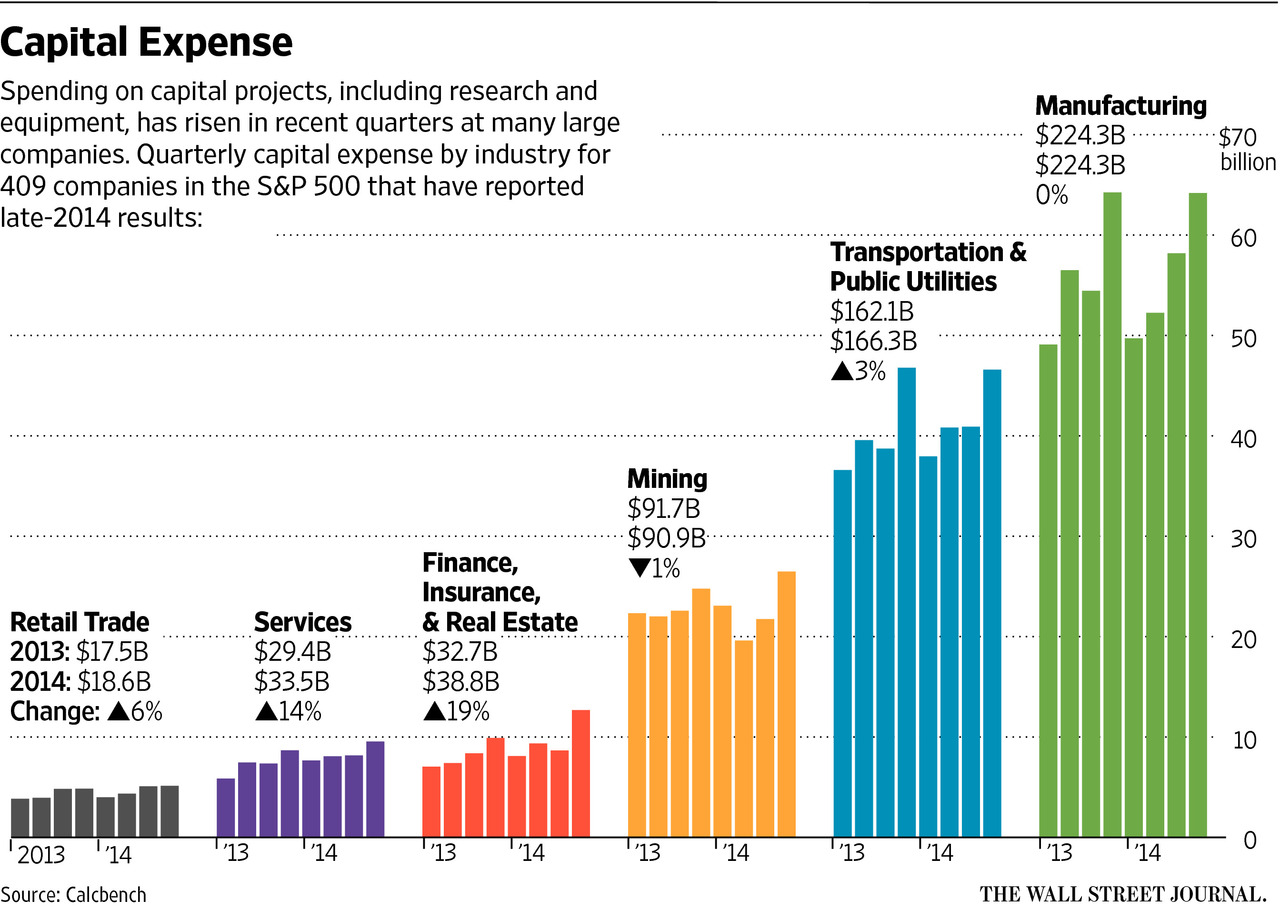 Audit the Fed: What Would Milton Friedman Say? In a 1962 essay, Milton Friedman “concluded that ‘the case against a fully independent central bank is strong indeed,’” Steve H. Hanke writes on the Cato Institute’s blog. “Milton Friedman’s position on this issue was quite clear at the time. There is little doubt as to whether he would see the situation at hand any differently.”

The Fed’s Aim Needs Work. “The time for target practice would seem to be running short at the Federal Reserve if Friday’s jobs report comes in anywhere near expectations,” writes Spencer Jakab in the Journal. “More than six years into the era of near-zero rates, the strength of the U.S. labor market is approaching the threshold beyond which it will, in theory, start stoking inflationary pressures.”

–The modest pickup in eurozone economic growth in the final months of last year was aided by rising investment and exports, a boost to hopes that the currency area’s recovery will strengthen this year.

–The weaker euro has raised European exports to the U.S. shipped by United Parcel Service Inc. by more than 10% compared with a year ago, an unexpectedly large and fast change in global trade flows, said the company’s chief financial officer, Kurt Kuehn.

–Russia’s troubled ruble has found some sort of equilibrium and reflects current economic conditions, the Bank of Russia’s First Deputy Chairman said in an interview with Interfax news agency.

–The Central Bank of Iraq on Friday marked 11 years since it was re-established as the nation’s independent central bank following the U.S.-led 2003 invasion.