While rate expectations for the next couple of years are higher, economists are moving down their estimates for where they think the Fed will keep its benchmark rate over the longer run. A neutral rate – one that keeps unemployment low and doesn’t cause the economy to overheat – will be around 3.75% over the next decade, economists said. A year ago they thought a neutral rate was closer to 4%. Expectations for neutral rates are dropping because economists believe the economy’s long-run potential growth rate has diminished.

It fits together with some acceptance of the Lawrence Summers view of the secular stagnation in the economy, in which the economy reaches full employment sooner than expected, but doesn’t grow very fast thereafter.

Read more below on the survey results.

Fed’s Bullard: Fed May Need Rate Rises ‘Sooner Rather Than Later.’ The Fed “is closer to its macroeconomic targets today than it has been most of the time since 1960,” Mr. Bullard said. “Stronger-than-expected data, rising inflation and rapidly improving labor markets may change” the Fed’s rate outlook “in the months and quarters ahead,” he said.

Most Economists Surveyed Worry the Fed Will Keep Rates Low Too Long. Many more economists worry the Federal Reserve will wait too long to raise interest rates than think it will tighten policy too quickly, according to the Journal’s latest survey.

Senate Approves Move to Reserve Fed Seat for Community Banks. The U.S. Senate on Thursday approved legislation that would reserve one seat on the Fed’s seven-member board of governors for someone with community banking experience.

Insurers’ Dodd-Frank Change Faces Hurdle. A bill championed by insurers that would give the Federal Reserve more flexibility in regulating large insurance companies passed the Senate unanimously last month. But top House Republicans are considering packaging it with other changes to Dodd-Frank, a move that would reduce the likelihood of its passage, according to people familiar with the discussions.

Start Circling Dates on Your 2015 ECB Calendar. The European Central Bank has released its calendar for next year, reflecting its new policy of having monetary policy meetings once every six weeks rather than once a month.

China Fueling U.S. Bond Rally, Low Treasury Yields. The Chinese government has increased its buying of U.S. Treasurys this year at the fastest pace since records began more than three decades ago, data released Wednesday show. The purchases help explain Treasurys’ unexpectedly strong rally this year, at a time when the Fed was scaling back its bond purchases.

India’s Central Bank Issues Draft Rules for Starting Small Banks. The Reserve Bank of India on Thursday said small banks will be allowed to provide basic services such as accepting deposits and providing credit to customers in a small area.

Bank of Russia Offers Help to Sanctioned Lenders. The central bank said Thursday that it will provide help to lenders sanctioned by the U.S. if needed, adding that bank clients won’t be affected by Western penalties. –Dow Jones Newswires.

BOJ June Meeting Minutes Signal Nervousness Over Exports. The Bank of Japan has so far put a brave face about lackluster exports, saying the Japanese economy can keep recovering even if exports remain sluggish, but the summary of discussions at its June 12-13 policy meeting suggest some board members are getting a bit nervous – Dow Jones Newswires.

The American labor force, as a share of the overall population, has been shrinking for more than a decade. A detailed new report from the White House Council of Economic Advisers estimates most of that decline has been driven by the retirement of the Baby Boom generation and that only one-sixth of the decline is clearly attributable to the weak economy. 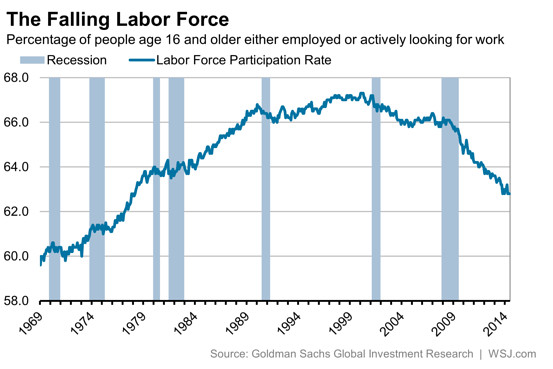 Economic Volatility in Emerging Economies. Growth in emerging economies such as the BRIC countries — Brazil, Russia, India and China — is far more volatile than the rate of economic growth in the U.S., notes the St. Louis Fed’s FRED Blog. “The U.S. rate is never the highest. On the rare occasions when it is the lowest, it is only barely so — with 2007 being the exception.”

Federal Reserve Chair Janet Yellen was candid before Congress this week, as she has been in the past, in telling lawmakers that the biggest economic risk she sees facing the country is the possible emergence of a new permanent class of unemployed workers, write Marc Sumerlin and Phillip Swagel in the Journal. “To head off this possibility, the Fed is holding monetary policy accommodative longer than traditional monetary models would recommend. Opinions on the wisdom of this policy are split, but the Fed’s openness about its policy is heralded almost universally as a desirable development. We are not so sure.”

Economists don’t like the House bill that would require the Fed to adopt a formal policy rule, but that shouldn’t be the end of the discussion about discretionary monetary policy, James Pethokoukis writes on the American Enterprise Institute’s blog. “There should not just be a rule, but the correct rule that is clear on what the goal is.”

Paranoia about inflation “isn’t a simple misunderstanding that can be corrected by pointing to evidence,” Paul Krugman writes on his New York Times blog. “It’s deeply embedded in the modern conservative psyche.”

The European Central Bank’s targeted longer term refinancing operations (TLTROs) are supposed to be a credit-easing measure, but it is far from clear that the scheme will do much to ease credit constraints, writes Richard Barwell, senior European economist at the Royal Bank of Scotland, in The Wall Street Journal.

Recent changes to the Bank of England’s Inflation Report aid accountability by clarifying and quantifying the key components of the Monetary Policy Committee’s projections, write two BOE economists.  They write that makes it easier for outside observers to hold the Bank to account for its performance.

– U.S. home prices are overvalued and aren’t likely to rise between 2016 and 2022, according to a forecast by Bank of America Merrill Lynch.

-Karnit Flug, governor of the Bank of Israel, this week named Daniel Hahiashvili as her new chief of staff.

-Iraqi bankers tell the Financial Times that the reported robbery of more than $400 million by the Islamic State of Iraq and al-Sham from Mosul financial institutions in June never happened.