Today marks the midpoint of the year, a moment to take stock of what has changed. Economists and central bankers expected the U.S. economy to grow more quickly in 2014 than in previous years, and they’re still waiting for this acceleration to materialize.

Until firm evidence materializes to change this story, it looks like the U.S. is stuck on a disappointing 2% growth track.  Yet the unemployment rate continues to decline at a surprisingly fast pace for an economy growing so slowly. With an unemployment rate at 6.3% in May, the economy could be very close to the Fed’s definition of full employment by year end. That adds up to a productivity slowdown which has been in train for several years. In short, the secular stagnation story is alive and well six months into 2014.

Financial market developments are a bit harder to add up. Slow growth and weak productivity shouldn’t bode well for stocks. A Fed winding down its bond purchases shouldn’t either. Yet the S&P 500 index is up 6% through mid-year. Inflation has picked up more quickly than many Fed officials expected in part because slack is diminishing.  That should make U.S. Treasury securities less appealing, yet investors are scooping them up and pushing down their yields in the process. Yields on 10-year U.S. Treasury notes have dropped half a percentage point since the beginning of the year to 2.53%. Gold is up. Oil is up. London real estate is up. And just about every stock market in the world is up, with the exceptions of Japan, China, Hong Kong and South Korea.

Fed’s Williams Upbeat on Growth, But Sees No Rush on Rates. John Williams, president of the San Francisco Fed, on Monday took issue with critics who say the central bank has continued its low-rates and bond-buying policies for too long, saying the economic recovery has remained too weak for Fed policy makers to let up. Mr. Williams said he was optimistic that, despite a stunning 2.9% first-quarter contraction, he expects gross domestic product to expand at an annual rate above 3% for the remainder of the year.

Australia’s Central Bank Keeps Interest Rates at Record Low. Australia’s central bank held rates at a record low for the eighth meeting in a row, as the resource-rich economy remains stuck in low gear. In its monthly policy statement Tuesday, the Reserve Bank of Australia signaled once again that it would keep rates at a record-low 2.5% for some time to help Australia transition away from a long mining boom that is cooling, causing investment in the resource industry to drop steeply over the past two years.

Global Inflation Picked Up in May. Consumer prices rose at a more rapid pace across most of the world’s largest economies for the third straight month in May, leaving Europe alone in struggling with the problem of too little inflation.

ECB’s Cœuré Dukes It Out With the Resistance. Central bankers rarely respond to criticisms over their handling of the financial crisis and its aftermath, or engage with their critics. It’s therefore  noteworthy that Benoît Cœuré, a member of the ECB’s six-person executive board, sat down for a joint interview with two activists from a protest group that has staged a series of demonstrations against the institution he works for, and is planning more.

Euro-Zone’s Manufacturing Sector Activity Slows in June. Activity in the euro zone’s manufacturing sector slowed in the three months to June, business surveys showed, a sign that more than a year after its economy returned to growth, the currency area’s recovery remains weak and uneven.

In Europe, Meager Inflation Feeds Japan Talk. Monday’s weak euro-zone data on inflation and loans to businesses will add more fuel to the debate about whether European Central Bank, and euro-zone policy makers more generally, need to do more to prevent the bloc’s $13 trillion economy from getting stuck in a low-growth, low-inflation rut like Japan’s.

BOE to Monitor buy-to-let Borrowing in U.K. for Risks to Financial Stability. Bank of England officials intend to monitor buy-to-let borrowing in the U.K. for potential risks to financial stability, a sign of officials’ concern that risky lending may be taking place outside the normal mortgage market.

Chinese Factories Boost Output. China’s factories boosted output in June, according to gauges released Tuesday, in a sign that government stimulus efforts are injecting vigor into the economy. Economists React. 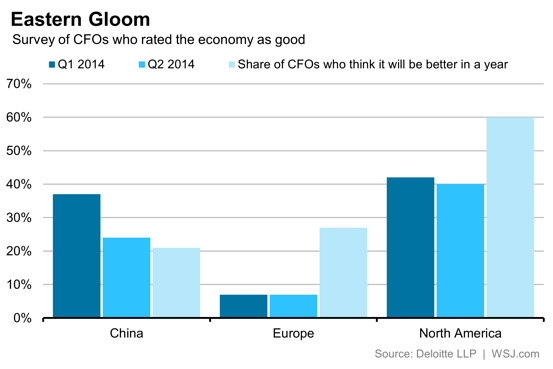 San Francisco Fed: U.S. Inflation Will Likely Remain Low Through 2015. U.S. inflation should remain well below the Federal Reserve’s 2% target through the end of 2015, two economists at the San Francisco Fed said Monday in a new research paper. But if public expectations for inflation remain well-anchored at the Fed’s goal and if the inflation effects of the long-term unemployed are excluded, core prices will rise “at a relatively fast pace, surpassing 2% by the end of 2015,” they said.

The mystery of sluggish productivity gains in recent – and potentially future – years “is of the greatest possible consequence for the U.S. economy, affecting everything from when interest rates should rise to where they should peak, from the sustainability of U.S. debt to what is the wisest level of investment for every business in the country,” writes Robin Harding in the Financial Times.

The People’s Bank of China has tightened policy more than other major central banks since the global financial crisis, on the basis of both ex-post real policy rate and real effective exchange rate, writes Guonan Ma of the Bruegel think tank.

-The Dutch central bank will reduce its governing board from five members to four as the ECB takes over new banking-supervision duties.

-A top official from Hungary’s ruling party said the government plans to convert foreign-currency loans into forints at below-market rates to ease the financial burden on Hungarians, partly at the expense of the banking sector.

-The Bretton Woods conference, which led to the creation of the International Monetary Fund and the World Bank, began 70 years ago today at the Mount Washington Hotel in scenic Bretton Woods, N.H.