When Federal Reserve leaders speak out about the economy and interest rate policy, markets all over the world often flutter. On Tuesday, however, it was just biotech, social media and small-company stocks caught in the central bank buzz saw.

A 55-page report accompanying Fed chairwoman Janet Yellen’s semiannual testimony to Congress noted in two places that valuations in those sectors were stretched. Investors sold shares in those sectors in response.

The movement brought back memories of Alan Greenspan’s 1996 warning of irrational exuberance in stock markets. But the consensus then was that central bankers are in no position to identify bubbles, much less deal with them once affirming they exist. Mr. Greenspan’s famous comment was actually a question: “How do we know when irrational exuberance has unduly escalated asset values?” And he added this question for good measure: “Where do we draw the line on what prices matter?”

Tuesday’s market turbulence highlights the difficult challenge that central bank leaders face in the post-financial-crisis economy in which that consensus no longer exists. Like it or not, central bankers have taken on the new role of lines judge for the world’s markets – sitting above the action and trying to decipher where markets have gone out of bounds.

The Fed now has a team of economists in an Office of Financial Stability searching daily for excess. In addition to biotech and social media, the judges are raising flags on corporate junk bonds and leveraged loans.

As Mr. Greenspan recognized many years ago, identifying bubbles is only part of the central banker’s challenge. The next is deciding what to do about them. Should the Fed run a tighter credit policy to prick a junk bond boom if that means higher unemployment in return? Ms. Yellen argued again Tuesday that she doesn’t like that tradeoff and wants to try responding to financial excess first with tougher regulation.

What galls many investors is that the Fed isn’t a disinterested party sitting above the fray. Ms. Yellen acknowledged Tuesday the Fed’s own low interest rate policies are feeding “reach for yield” behavior in some markets. Imagine that judge in a tennis match throwing extra balls on the court during play, and then raising the flags when the balls go out of bounds.

It’s a whole new game for the central bank, one everyone is still learning to play. 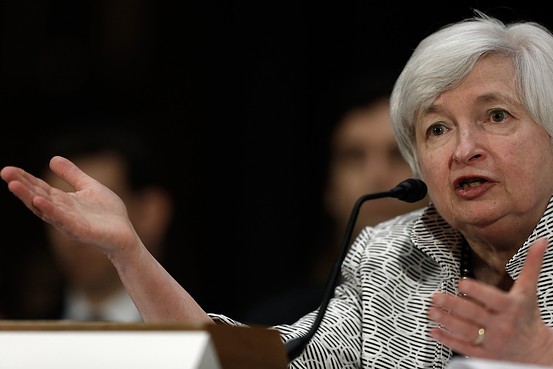 Fed’s Yellen Hedges Her View on Rates. Federal Reserve Chairwoman Janet Yellen defended keeping interest rates low before Congress on Tuesday, but opened the door a crack to earlier-than-planned rate hikes if the labor market continues to improve quickly. “If the labor market continues to improve more quickly than anticipated by the [Fed],” she told the Senate Banking Commitee on Tuesday, “then increases in the federal funds rate target likely would occur sooner and be more rapid than currently envisioned.”

Yellen, Fed Still Worried About Slowdown in Housing Recovery. The housing market began to slow down last year when mortgage rates spiked and has so far has failed to regain much traction, Ms. Yellen said.

Fed Wants Better Compliance on Leveraged Loan Guidelines, Report Says. The central bank is keeping a close watch on what it sees as potentially excessive risk-taking in the market for leveraged loans.

What Yellen Did to the Markets, in Three Charts. Social-media and biotech stocks were hit hard after the Fed signaled its concern about pricey valuations of some of those firms.

China GDP Grows 7.5% in Second Quarter. China’s growth accelerated slightly in the second quarter and modestly exceeded analysts’ expectations, an indication that Beijing is having some success with its strategy of selective spending and credit-easing to boost the world’s second-largest economy.  Economists React.

China Housing Sales Fall in First Half of 2014. China’s housing market showed signs of improvement in June, as the pace of the fall in sales slowed on a year-over-year basis for the second-straight month, but analysts say the property sector isn’t out of the woods.

Pain Spreads From China’s Excess Production. China’s problem with bloated production is ricocheting around the world. China is producing too much steel, plate glass, chemicals, solar panels and other goods for the domestic market, and usually exports the excess at cut-rate prices. That creates big problems for China’s competitors, who have to cut their prices to compete, slashing profits for everyone.

BOE’s Carney Sees BIS Disconnect From Reality. He dismissed a call from the Bank of International Settlements for a quick return to more normal interest rates as being the product of an organization that is out of touch with reality. Mr. Carney’s response was the most robust rejection yet of an analysis by the BIS, arguing that low interest rates have become dangerous for the global economy.

India’s RBI Takes Step to Encourage Infrastructure Lending. India’s central bank Tuesday eased certain fundraising conditions imposed on banks as it sought to make it easier for them to lend to the country’s infrastructure sector.

Chile’s Central Bank Cuts Monetary Interest Rate to 3.75%. The Central Bank of Chile cut its monetary interest rate by 25 basis points to 3.75% on Tuesday, taking into account that “the rate of expansion of the local economy and demand has continued to slow down,” the central bank said in a statement.

Brics Agree to Base Development Bank in Shanghai. The leaders of the Brics countries took another step toward carving a larger role for themselves in the global financial system when they agreed Tuesday to base a new development bank in Shanghai. The New Development Bank, as it will be called, is intended to finance infrastructure projects in the founding members of Brazil, Russia, India, China and South Africa, and in other emerging-market countries as well.

The U.S. unemployment rate is getting closer to the Fed’s estimate of the non-accelerating inflation rate of unemployment, or NAIRU — a rate that is happily low, but not so low that the economy and job market risk overheating and causing inflation. It is impossible to know exactly where this theoretical jobless rate stands. The trick for the Fed is to help guide unemployment into this comfort zone with interest rate policies and keep it there. 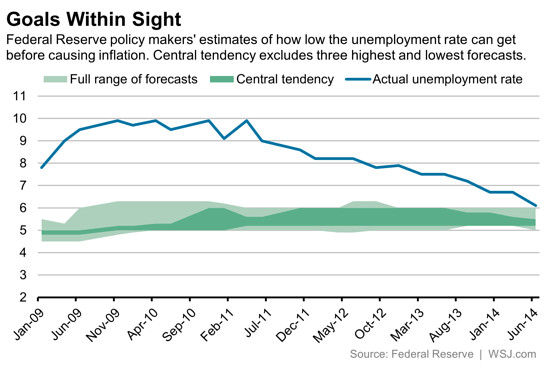 The Effects of Extending Unemployment Insurance Benefits. The Emergency Unemployment Compensation program, which provided additional weeks of unemployment insurance benefits to long-term unemployed workers, expired at the end of 2013. Researchers at the Federal Reserve Bank of St. Louis examined what the effect would have been if the program had expired earlier. They found that, had the EUC program expired earlier in 2013, workers with 46 or more weeks of continuous unemployment would have been 1.2 to 2.1 percentage points more likely to become re-employed.

If the economy is nearing the point at which the Fed should start raising rates, Ms. Yellen doesn’t see it, writes Justin Lahart in the Journal’s Heard on the Street. “For stock investors, the fact that Ms. Yellen doesn’t want to tap the brakes until the economy is in much better shape counts as good news. For bond investors, though, her apparent willingness to test the point at which the economy starts generating more inflation could give pause.”

Some major questions stand out Ms. Yellen heads to Capitol Hill this week, Mohamed El-Erian notes in Bloomberg View, “particularly, when should the Fed start raising interest rates, and are its unconventional stimulus efforts contributing to a financial bubble? Unfortunately, neither Ms. Yellen nor anyone else is in a position to provide decisive answers at this stage.”

Ms Yellen is right: workers need a raise, writes Mark Whitehouse in Bloomberg View. Ms. Yellen — most recently in her congressional testimony Tuesday– has signaled that she’d like to see U.S. workers getting paid more, and that she’s not terribly concerned about inflation getting out of control if they do. “Judging from how workers typically fare in recoveries, Yellen is right: They’re long overdue for a raise…Pretty much all the benefits of workers’ increased productivity have so far gone to corporate profits, not to them.”

Berkeley’s Barry Eichengreen and three other economists write that the history of gold flows between Federal Reserve districts has a number of lessons for the euro zone and the recent debate around TARGET2 imbalances. “That fortunes could change quickly, with earlier gold recipients turning subsequently into gold providers, indicates that the notion of core or periphery regions within a monetary union is not necessarily carved in stone – something that provides scope for co-insurance or risk sharing,” they write.

-Prices for goods imported to the U.S. inched higher in June, indicating still-modest inflationary pressures across the U.S. economy.

-The ECB’s balance sheet was down EUR13 billion last week to EUR2.06 trillion ($2.8 trillion), continuing its steady slide since peaking above EUR3 trillion two years ago and now equaling about 21% of euro-zone GDP (based on 2013 GDP).–Dow Jones Newswires.

-The euro zone’s surplus in its trade in goods with the rest of the world rose in May compared with the same month last year, as exports rose. However, figures released by the European Union’s statistics office Wednesday also showed that trade with Russia continued to decline sharply following the Kremlin’s takeover of Ukraine’s Crimea peninsula in March.

-India’s merchandise exports expanded by more than 10% for the second month in a row in last month in the latest sign that India’s economy may be rebounding.