HILSENRATH’S TAKE
Federal Reserve officials have been making progress on developing a blueprint for the mechanics of future interest rate increases, a project that has occupied much of the agenda of their past three policy meetings. This puts officials in a position to make some decisions on “how” they will raise interest rates– as opposed “when”– by their September meeting.

Minutes of the Fed’s July meeting, to be released Wednesday, could provide fresh clues on how officials are thinking. One issue that warrants attention: Will the Fed in the future target a specific interest rate, as it did before 2008, or an interest rate range, as it does now? The strategy the Fed is developing strongly suggests it will be the latter at least for a few years.

The Fed’s benchmark short-term interest rate is an overnight, inter-bank lending rate called the federal funds rate. Before the financial crisis, the Fed targeted a specific fed funds rate – in September 2008 it was 2.00%, in November 2007 it was 4.50%, in July 2006 it was 5.25%. Right now the Fed seeks to keep the fed funds rate within a range between 0% and 0.25%, rather than at a specific point.

Fed officials are looking at two tools to manage short-term interest rates in the future, something they call a “belt and suspenders” approach. The main tool is the interest the Fed pays banks on the reserves they keep parked at the central bank. That’s currently 0.25%. The rate could become an upper bound on short-term interest rates. The Fed also pays non-banks such as money market mutual funds interest on their cash through overnight reverse repo trades – currently 0.05%. This could become a lower bound on rates. When the Fed wants to raise rates, it looks increasingly like it will use these rates to raise the band from 0%-0.25% to a new band – say 0.25% to 0.5% — rather than try to pinpoint the target.

Economist Say Yellen To Warn: Don’t Be Fooled by the Unemployment Rate Drop. Economists expect Fed Chairwoman Janet Yellen to give a master-class explaining why she believes there is still a lot of slack in the job market. Ms. Yellen, scheduled to speak Friday at the Kansas City Fed symposium in Jackson Hole, Wyo., is likely to review her dashboard, a set of statistics she highlighted earlier this year. Economists don’t think she will signal any shift in the easy stance of policy.

Fed Economists Criticize SEC Money-Fund Restrictions. Federal Reserve economists are warning a central plank in the Securities and Exchange Commission’s plan to rein in risks posed by the $2.6 trillion money-market mutual-fund industry will inadvertently encourage investor stampedes rather than quell them.

When Packing for Jackson Hole, Include These Economic Reports. Before Jackson Hole gets underway this week, policymakers will have new information on U.S. housing and inflation, two topics that feed into their thinking on the economy and policy.

Australia’s Central Bank Uncertain About Economic Outlook. The Reserve Bank of Australia said Tuesday there was a “significant degree” of uncertainty about the economic outlook as growth slows due to a fading mining investment boom and a high exchange rate. In minutes of its Aug. 5 policy meeting, the central bank reaffirmed its recent position that interest rates will most likely need to stay low for some time to come. –Dow Jones Newswires

Banks Cast the Net Wider to Re-Staff Foreign Exchange. Banks are slowly starting to restock their senior foreign exchange staff after a global investigation into the currencies market saw some firms fire or suspend a slew of employees. Efforts to improve the reputation of the foreign exchange industry following allegations of benchmark rigging have focused on staffing as well as FX benchmarks themselves.

GRAPHIC CONTENT
Large institutions have been snapping up U.S. junk bonds, taking advantage of a price slide triggered by an exodus of individual investors. Many big money managers say they remain bullish on these risky corporate bonds despite concerns that the market is overheated and worries that geopolitical unrest could fuel a rush to safer assets.

RESEARCH
Workers Don’t Have the Right Skills? Blame Employers, Says New Research from UPenn.  Ever since the the recession, job openings have far outpaced the number of people being hired. A common refrain from employers is that workers lack proper training and education for the available jobs–in other words, that a “skills gap” is to blame. But the fault rest with employers, not workers, says a new working paper from Peter Cappelli, the director of the Center for Human Resources at the University of Pennsylvania’s Wharton School. 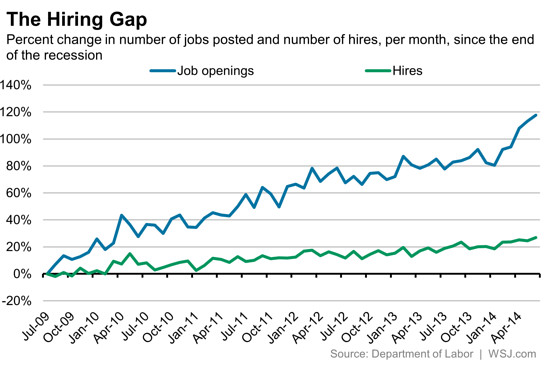 Global Financial Crisis Offered ‘Baptism’ For Some Home-Currency Debt Issuers. Almost all international debt is issued in major global currencies such as the U.S. dollar and the euro, but the financial crisis of 2007-2009 provided an opening for a handful of smaller currencies to gain ground, according to a new analysis from the San Francisco Fed. “The results suggest that the crisis offered well-suited countries a ‘baptism’ of sorts, setting the stage for a new equilibrium in the global economy, in which a broader set of countries can issue debt internationally in their own currency and escape the problem of ‘original sin.”

COMMENTARY
There are still ways the European Central Bank could act to save the euro, but “my guess is that the ECB will not do any of these things,” Wolfgang Münchau writes for the Financial Times. “It will continue blaming eurozone governments for not implementing structural reforms. Eventually, it will adopt a programme of asset purchases that is too small, which it will abandon prematurely at the first sign of recovery.”

The Bank of England hasn’t done a very good job of forecasting U.K. wage growth, which remains weak, David Blanchflower writes for The Independent. “Don’t listen to a word the inflation nutters say. Now is definitely not the time to raise rates. Actually a bit of inflation might be nice: in the past it has had a wonderful side effect it has been accompanied by real wage rises for workers.”

Hiking alone is a bad idea when it comes to the wilderness, and “central bankers should perhaps heed the same advice when it comes to interest rates as they fly this week to the Tetons and their annual symposium on monetary policy in Jackson Hole,” Simon Kennedy writes for Bloomberg. “Currency bulls rather than grizzly bears are the reason there is safety in numbers for them.”

– The average price of new homes in China fell for a third straight month in July, declining nearly twice as fast as in June, as property developers further cut prices in response to a market downturn.