“When you get complacency you’re bound to be surprised at some point.” Richard Fisher, president of the Federal Reserve Bank of Dallas, said in an interview.

Germany’s popular tabloid Bild was all wrong about Mario Draghi.

“Please not this Italian!” the paper bemoaned three years ago when Mr. Draghi, who used to head Italy’s central bank, emerged as a leading candidate for European Central Bank president. “Mamma mia, for Italians, inflation is a way of life, like tomato sauce with pasta!”

The latest inflation readings should remove any doubts about Mr. Draghi’s inflation-fighting chops. Consumer prices were up 0.5% in May from the previous year, matching a four-and-a-half year low and far below the ECB’s target of just below 2%.

It was the eighth-straight sub-1% reading. And likely not the last. JPMorgan expects another dip to 0.4% this month. Citibank expects inflation to weaken to 0.3% this summer.

In fact, Mr. Draghi (who took over the ECB when inflation was 3%) now faces the opposite complaint: he hasn’t fought hard enough to generate more inflation. With consumer prices growing weakly, it wouldn’t take much of a shock–from Ukraine or emerging markets or slower growth in China–to push the euro zone into outright price declines, or deflation.

That would upend an already fragile recovery and make it harder for households, businesses and governments in southern Europe to service their debts.

And it raises the question: has Mr. Draghi waited too long? The package of measures he is expected to unveil Thursday–interest rate cuts (including a negative deposit rate), an extension of unlimited bank loans into 2016 and a targeted bank-funding plan aimed at private sector credit–would have been impressive three months ago.

But they may fall flat with investors now, given the persistent weakness in inflation. Even a plan to purchase asset-backed securities, which the ECB has flagged as a possibility, probably wouldn’t be enough to bring inflation back to 2% anytime soon.

That may leave the ECB will little choice but to engage in large-scale purchases of public and private debt securities later this year.

German media may cry foul. But Mr. Draghi’s reluctance to engage the fight against deflation sooner may make it inevitable.

Fed Officials Growing Wary of Market Complacency. Federal Reserve officials are starting to wonder whether a tranquility that has descended on financial markets is something to worry about, a development that could drive future interest-rate debates. The worry at the Fed is that when investors become unafraid of risk, they start taking more of it, which could lead to volatility, potential bubbles and other trouble down the road. Many officials appear more inclined to talk about market risks than act to preempt them given the worry about cutting off a fragile recovery with early interest-rate hikes.

ECB Ready to Tackle Europe’s Weak Inflation Thursday. The ECB is poised to act against very low inflation after months of delay, amid mounting evidence that weak prices are undermining the euro zone’s recovery from its debt crisis. Tuesday’s report showing inflation in the 18-country region softened to 0.5% last month—a four-year low—underscored the challenge facing the ECB as it prepares for a policy-setting meeting Thursday 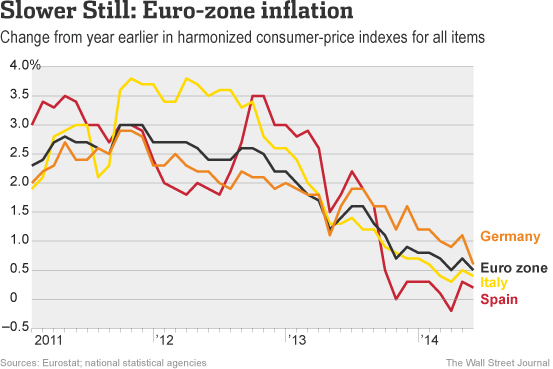 Weak Prices Hamper Euro-Zone Recovery. Business activity in the euro zone slowed more sharply in May than first estimated, a sign that weak prices are undermining the area’s recovery from its debt crisis.

ECB Officials Anxious About Impact of U.S. Fines on EU Banks. The ECB, anxious about potentially massive U.S. penalties against BNP Paribas SA and other continental banks, is considering adding an element to ongoing financial-health exams to try to estimate the possible damage, according to industry officials. The officials say the ECB has told them it is looking at whether banks have set aside enough money to cover the rising tab from U.S. investigations into alleged misconduct. Adding a new component to the stress tests has the potential to result in banks being forced to raise additional capital.

Lithuania Closes in on Euro Adoption. Lithuania received a preliminary green light from the European Commission and the European Central Bank to adopt the euro Wednesday at a time when the Baltic state plans to spend more on social security and national defence amid heightened tension with neighbouring Russia.

Bank of Canada Has Room to Stay Neutral on Rates, Dealers Say. All 12 primary dealers of Canadian government securities expect the Bank of Canada to hold its key policy rate steady at 1% in Wednesday’s rate-setting decision, and indeed throughout 2014. All but one dealer—Bank of America Merrill Lynch—expect the central bank to start raising rates next year, though they differ on the timing and number of increases.

Global Inflation Picks Up in April. Consumer prices rose at a more rapid pace across the world’s largest economies in April, easing concerns that too little inflation could derail the global economy’s weak recovery.

Peaking Inflation Tests Turkey’s Stance on Rates. Turkey’s annual inflation, jumped less than forecast in May, fueling speculation the central bank will double down on last month’s interest-rate cut and threaten the economic stability that followed January’s shock-and-awe rate hikes. Inflation hit 9.66% in May, higher than April but still lower than analysts’ forecasts of 9.8%. Even so, that’s almost double the official target.

Australian Economy Grows in First Quarter. Australia’s resource-rich economy expanded in the first quarter of 2014, supported by surging mining-related exports. Gross domestic product grew by 1.1% in the quarter from the prior one and 3.5% from a year earlier, a government report showed Wednesday. Economists had expected 1% sequential growth and a 3.3% year-over-year improvement.

Why RBI May Yet Have To Raise Rates Again. One key reason is the possibility of a growth rebound linked to the recent election of President Narendra Modi, writes the WSJ’s Abheek Bhattacharya. With inflation already so high, it’s hard to see India growing faster in the short term without seeing additional price pressures. 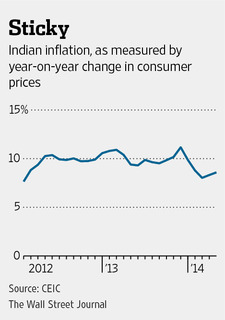 ABSs Could Fix Euro-Zone Transmission Mechanism. Princeton University’s Marcus Brunnermeier and Yuliy Sannikov argue that “prudently designed” securitizations of loans to consumers and small and medium-sized enterprises offer a way of ensuring the ECB’s accommodative monetary policy is felt in the real economy.

-Bank of Canada issues a policy statement at 10 a.m. EDT

Interest Rates at Zero May Link Uncertainty with Slower U.S. Growth. Uncertainty about the direction of the U.S. economy has been associated in recent years with weaker growth, at least in part because the Fed has kept short-term interest rates pinned near zero, argues new research from the Dallas Fed.

If Monetary Policy Spoke with a Texas Twang, Interest Rates Might Be Higher. Everything’s bigger in Texas. But should that include short-term interest rates? Two Dallas Fed economists recently speculated about what monetary policy would look like if Texas had its own central bank.

Ahead of the European Central Bank’s much anticipated meeting Thursday, the Brussels’ based Bruegel think tank have published a useful interactive graphic that highlights the inflation rate and various debt ratios across the currency area.

U.S. auto sales surged in May, confirming that the cold winter had more to do with damping demand earlier this year than a dip in consumer confidence. Car sales picked up in March and April, and now with results from several of the largest auto makers reporting Tuesday, it was clear May results were strong. 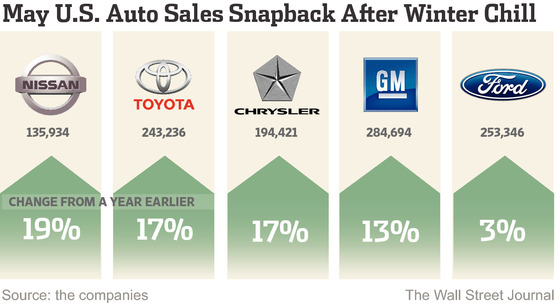 –The Philadelphia Fed has a new research director:  Michael Dotsey was promoted to the position left open by the departure of Loretta Mester, who recently became the Cleveland Fed’s new president.