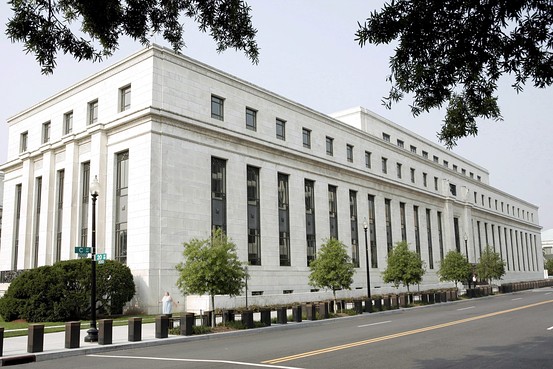 Federal Reserve officials revising their economic forecasts this week are likely to see the recent plunge in oil prices as a net benefit to the U.S. outlook, as lower energy costs bolster Americans’ ability to spend. But the sheer speed and magnitude of the retreat in crude oil prices, which have fallen over 40% since June to under $60 a barrel, is likely to raise eyebrows for those concerned about the central bank’s unofficial but increasingly important mandate: financial stability.

The contagion has been rather rapid. Not only have stock markets retreated across the world, led by energy related shares, but the $1.3 trillion U.S. junk bond market has also taken blows, and is now on track for its worst annual performance since the financial crisis.

Emerging market currencies are also taking deep hits, particularly oil exporters, with the Russian ruble setting daily record lows and the Indonesian rupiah sinking to a 16-year low. But even crude importers such as Turkey and India are seeing their currencies tumble.

The financial crisis and deep recession of 2007-2009 challenged traditional orthodoxy at the Fed that argued asset bubbles were too hard to spot and that interest rates were too blunt a tool to deal with them. Given the large economic costs of the popping of the bubble in financial assets linked to the U.S. housing boom, policy makers have become more open to the notion of acting preemptively, perhaps using regulatory or so-called macroprudential tools. Yet given the fledgling nature of that toolkit, the best Fed officials may be able to do for now is attempt to talk down frothier corners of the market.

Five Things to Watch at the Fed Meeting. The Federal Reserve holds its last policy meeting of the year on Tuesday and Wednesday, resulting in plenty of material to be scoured for clues about when interest rates will start inching up. The central bank’s policy committee releases its statement and new economic projections at 2 p.m., followed by Chairwoman Janet Yellen’s press conference at 2:30 p.m. Here are five key things to keep an eye on.

U.S. Manufacturers Surpass Prerecession Peak. Manufacturing output climbed past its prerecession peak this fall, adding to other signs the American economy is on solid footing. Factory output climbed 1.1% in November, the Fed said Monday. Capacity utilization jumped to 80.1% in November, its highest level since March 2008, indicating slack in the industrial sector has shrunk substantially. 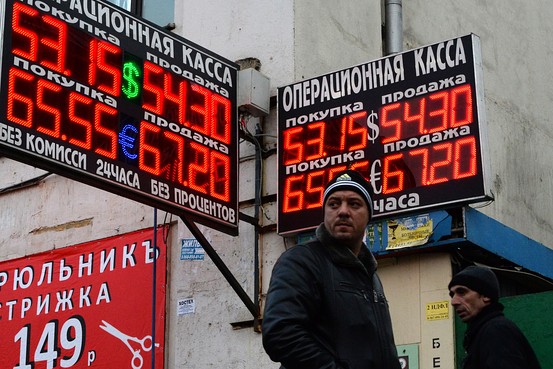 Russia Central Bank Raises Key Rate to 17% from 10.5% effective Tuesday after the ruble fell to a new record low against the dollar during Monday’s session. The central bank cited inflation risks and the rapid devaluation of its currency as the reason for its second rate hike in less than a week. Last Thursday, the central bank raised its policy rate to 10.5% from 9.5%.

Russian Ruble Under Pressure Despite Rate Rise.  The battered ruble plunged to a new record low against the dollar again Tuesday, as investors grew convinced that the Russian central bank’s surprise move overnight to jack up interest rates to 17% wouldn’t be enough to alleviate the pressure on the currency from falling oil prices and western sanctions.

Russian Economy Likely to Contract in First Quarter. Russia’s economy is likely to shrink in the first quarter of next year, and could contract by its largest amount in six years in full-year 2015, the central bank said Monday. The central bank said it sees the country’s gross domestic product in 2015 shrinking by 4.5%-4.7% if the price of oil, Russia’s major export, averages $60 a barrel. At an average oil price of $80 a barrel, which the central bank says is a more likely scenario, 2015 economic growth is expected to be close to zero. –Dow Jones Newswires. 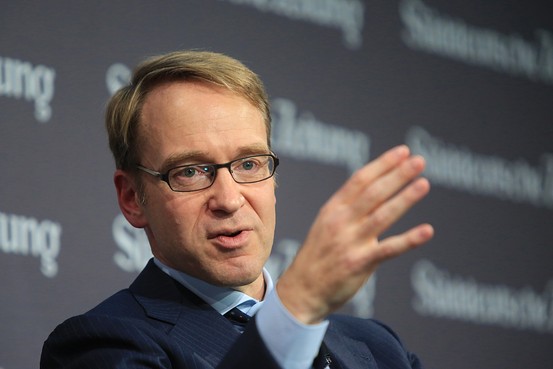 ECB’s Weidmann Says He Views Idea Of ECB Govt Bond Buys ‘Skeptically’. The head of Germany’s central bank cast doubt on the benefits of large-scale purchases of government bonds, underscoring divisions between many European Central Bank officials and its largest member country as the ECB inches closer toward taking this step early next year. In remarks to journalists late Monday Bundesbank President Jens Weidmann criticized the policy, known as quantitative easing or QE, on a number of fronts including doubts over its potential effectiveness, its chilling effect on economic reforms by governments and possible spillover effects in financial markets.

Eurozone Business Activity Lifts Slightly.  Activity in the eurozone’s private sector picked up only modestly in December, according to surveys of purchasing managers, an indication that the currency area’s economy is ending the year on a weak footing. The surveys also found that businesses again cut their prices in the face of weak demand, a development that will concern the European Central Bank, which is struggling to raise the currency area’s inflation rate from the very low level it has settled at for more than a year. 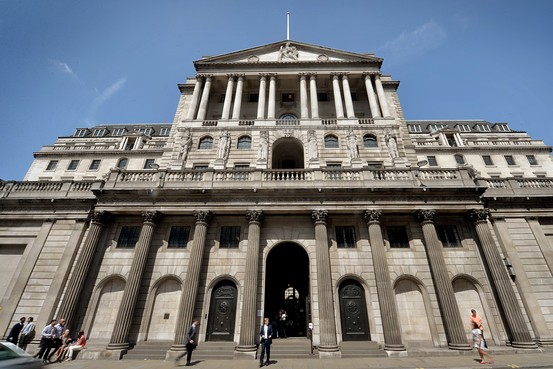 Bank of England Stress Test Gives U.K. Major Banks Clean Bill of Health. The Bank of England on Tuesday said all but one of the U.K.’s major banks passed a balance-sheet health check but warned that two of the nation’s biggest lenders needed to improve their capital levels. The central bank’s Prudential Regulation Authority put eight U.K. lenders through a hypothetical three-year economic collapse. To pass the test, banks had to maintain a 4.5% ratio of capital to risk-adjusted assets throughout the period.

BOE Sees Rising Eurozone Threat. The Bank of England Tuesday warned that continued low growth and inflation in the eurozone carries risks for the U.K. economy and the stability of its financial system.

U.K. Inflation Nosedived to 12-Year Low. Inflation in the U.K. nose-dived to a 12-year low in November, official figures showed Tuesday, pushing the headline rate further below the Bank of England’s 2% target. The annual rate of inflation was 1%, the lowest since September 2002, according to the Office for National Statistics. After edging up to 1.3% in October, the rate fell well below what economists polled by The Wall Street Journal were forecasting.

China to Revise GDP Estimate for 2013. China will revise the estimated size of its economy by 3% in 2013, even as weak factory numbers released Tuesday showed the world’s second-largest economy continues to struggle. The revision, which is lower than many economists had expected, will change little in practice and likely won’t significantly affect previously reported economic growth rates. Still, it could push up the date when the size of China’s economy officially surpasses the U.S. economy and influence the debate about the size of China’s imbalances, debt and slowdown.

Canada Household Debt Rises to Record High. A key gauge of household debt in Canada climbed to a record high in the third quarter as Canadians accumulated debt faster than their incomes grew, illustrating what the central bank has deemed the top risk to the domestic financial system.

Swedish Central Bank Considering Further Measures to Loosen Monetary Policy. Sweden’s central bank held its main interest rate steady at zero Tuesday but pushed back the timing of expected rate hikes to the second half of 2016 from mid-2016 as it seeks to lift inflation closer to target. The bank said it is also preparing further measures to make policy more expansionary which it could deploy after its next meeting Feb. 11 2015 if necessary. 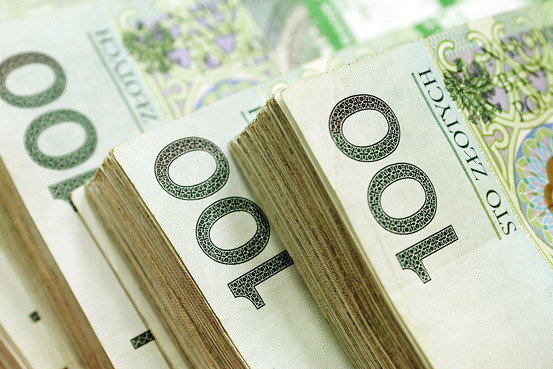 Bank Indonesia Intervenes in Forex Market. Bank Indonesia has been “actively” present in the market in recent days to defend rupiah assets, central bankers said Tuesday.  ”We have been actively supplying [dollars] and buying government bonds,” Senior Deputy Gov. Mirza Adityasawara said, adding that the rupiah has fallen beyond the IDR11,500-IDR12,000 level that the central bank deems good for both exports and imports – Dow Jones Newswires.

Junk-Bond Worries Spread Beyond Oil. The oil bust is exposing cracks in the $1.3 trillion junk-bond market, putting pressure on a key source of corporate financing and potentially crimping economic growth. While much of the stress has been in the energy sector on the heels of the sharp decline in oil prices, lately the woe is spreading across the junk market. 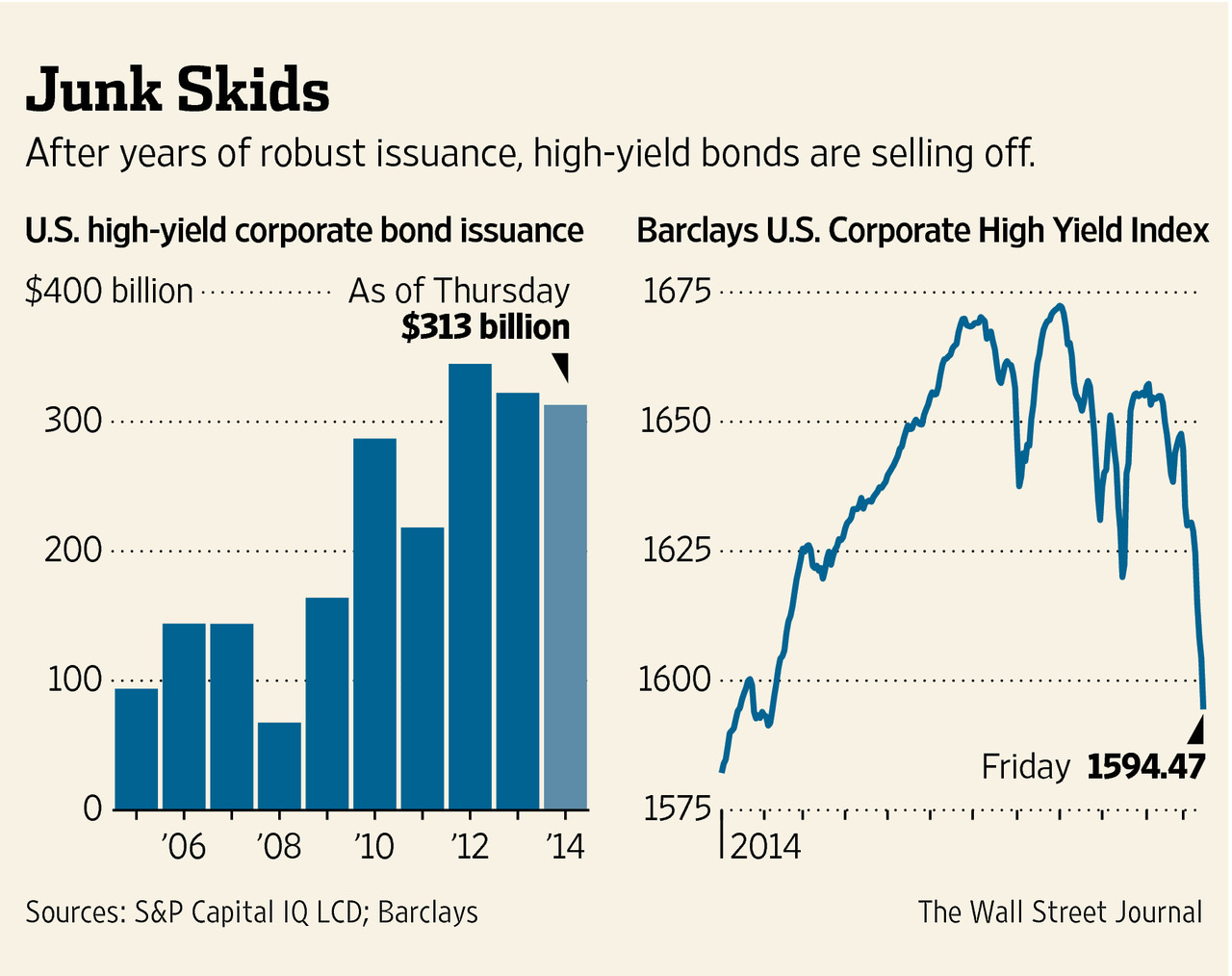 More Questions for Yellen. Federal Reserve officials “will be navigating some tricky currents” in their policy statement this week, Tim Duy writes on his blog. “The Fed could argue that improving domestic indicators at a time of softening in the global economy leaves the risks to the outlook as nearly balanced. They can’t both suggest that risks are weighted to the downside and pull the ‘considerable time’ language. That would, I think, be just silly.”

How to Keep Proving the Economic Pessimists Wrong. In the U.S. and the U.K., “a partnership of activist central banks and fiscal consolidation — planned or otherwise — has restored confidence, secured growth and cut unemployment,” George Osborne, the U.K. chancellor of the exchequer, writes in a Wall Street Journal column.

-Australia’s central bank saw no grounds to change the course of monetary policy, minutes of its last meeting showed, even as markets priced in a greater chance of further rate cuts next year.

-Happy Birthday Zirp! Six years ago today, the Fed cut its benchmark federal funds rate target to a range between zero and 0.25% for the first time. It has remained there ever since, earning the nickname Zirp for zero-interest-rate policy.

–The U.S. Mint cut the cost of making the penny by nearly a third over the past two years. But the little copper-coated coin still costs more to produce than its face value.