The Wall Street Journal’s Daily Report on Global Central Banks for Thursday, May 29
Sign up for the newsletter.

San Francisco Fed President John Williams weighs in this week with a new research paper on the interplay between long-term unemployment, inflation and monetary policy. His conclusion: The Fed may need to allow inflation to overshoot for a time in order to reduce the army of people out of work for long periods.

Mr. Williams, writing an academic working paper with Glenn Rudebusch, the San Francisco Fed’s director of research, splits the two camps. They side with the first camp on the economics of the long-term unemployed and side with the second on the monetary policy implications of this analysis. In other words, the low rate of short-term unemployment does create inflationary pressure, they say, but the Fed should be prepared to tolerate it for a little while to help the long-term unemployed.

“All in all, a fairly good case can be made that inflation dynamics in the United States are related to short-term unemployment and that the long-term unemployed appear to exert little pressure on wages and prices,” the authors conclude. But in calculating an optimal monetary policy response to these tradeoffs, the authors go on to say, “optimal policy should trade off a transitory period of excessive inflation …in order to bring the broader measure of underemployment to normal levels more quickly.”

Keep watching this debate. It will get even more interesting if the jobless rate keeps falling or wages pick up.

Senators tell Obama: Fed Nominees Should Aim to Take on Wall Street. Two members of the Senate Banking Committee–Jeff Merkley (D., Ore.) and Elizabeth Warren (D., Mass.)– sent a letter Wednesday to President Barack Obama urging him to fill two vacant seats on the Federal Reserve’s seven-member board with nominees possessing an interest in financial regulation and a desire to address the problems revealed by the 2008 financial crisis.

Fischer Joins the Fed. Stanley Fischer is officially a member of the Fed’s board of governors, though he still needs Senate approval to become the No. 2 official at the central bank. Fed Chairwoman Janet Yellen administered the oath of office to Mr. Fischer Wednesday. President Barack Obama also nominated Mr. Fischer, the former head of the Israeli central bank, to become vice chairman of the Fed. That nomination still is awaiting Senate confirmation. 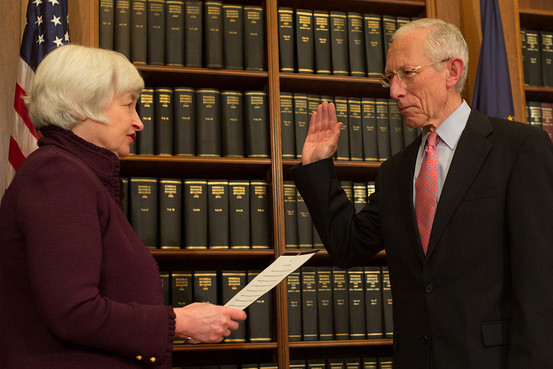 BOJ Member Says Easing Could Continue. The Bank of Japan will likely miss the deadline for its inflation target and have to continue with stimulus measures for a few more years, one of its policy board members said Thursday, challenging the optimism of its governor, Haruhiko Kuroda. The remarks by Sayuri Shirai were the most specific yet by a board member on how long the BOJ will have to stick with its current easing program, and underscored skepticism toward Mr. Kuroda’s view that inflation will reach the 2% target by spring next year.

Brazil’s Central Bank Stops Raising Rates. The Brazilian central bank ended a year-long cycle of interest rate increases Wednesday even though inflation remains close to the target ceiling, a move some economists say is risky for a country with a recent history of out-of-control price increases. The bank’s monetary-policy committee decided unanimously to keep its benchmark Selic rate unchanged at 11%. It is the first time the body didn’t raise the rate at a meeting since early 2013, when the Selic was at a historic low of 7.25%.

BOE’s Weale: Can Wait “A Bit Longer” Before Raising Rates—FT. In an interview with the Financial Times, Martin Weale, an external member of the Bank of England’s Monetary Policy Committee, said he thought even a “gradual” rise in interest rates could see borrowing costs rise by up to one percentage point a year – faster than markets are expecting.

Turkey’s Central Bank Faces Mounting Government Pressure. The Turkish government’s blunt calls this week for the country’s central bank to lower interest rates have spurred concerns over political pressure on the bank. Prime Minister Recep Tayyip Erdogan’s comments follow last week’s decision by the bank to cut its benchmark rate for the first time in a year, easing by 0.5 percentage point to 9.5%. While economists widely criticized the move amid worries that inflation will overshoot the central bank’s 5% target by a wide margin, Mr. Erdogan called the cut a “joke” that would hinder growth because it didn’t go far enough to bolster investment.

Philippine Officials Seek New Boost as First-Quarter Growth Disappoints. Philippine authorities are looking at ways to rev up reconstruction and rehabilitation from last year’s natural disasters after data Thursday showed the economy grew at its weakest pace since late 2011 in the first quarter.

China Boosting Local Spending. China’s Finance Ministry said Wednesday it has asked local governments to speed up spending on infrastructure and other budgeted investments to give sluggish economic growth a shot in the arm. Over the first four months of the year, China’s fiscal spending growth slowed to 9.6% from 13.6% a year earlier, finance ministry data showed.—Dow Jones Newswires

As Korea’s Reserves Grow, So Do Questions About FX Intervention. Seoul may increasingly realize that it’s just not worth leaning so hard against the wind, especially as the government of President Park Geun-hye seeks to encourage domestic demand.

Don’t Worry about Big Central Bank Balance Sheets. Niall Ferguson, the Harvard University historian, has a message for those who fret about the size of the Federal Reserve’s balance sheet: Don’t worry too much. In a paper presented at the European Central Bank’s conference in Portugal, Mr. Ferguson and two co-authors offer a few intriguing conclusions from newly assembled data tracing the history of central bank balance-sheet expansions (23) and contractions (17) of 12 advanced economies since 1900.

Kuroda’s Plan is Working, writes Adam Posen, president of the Peterson Institute for International Economics, in the Nikkei Asian Review. “The Bank of Japan’s policies over the last 14 months are a welcome return to sanity,” Mr. Posen said. “Under Gov. Haruhiko Kuroda’s leadership, there are three important improvements that the BOJ has made to its monetary regime. It is not just about the specific targets and tools pursued — a new monetary regime is one that creates a larger set of expectations about policy that ripple through to price- and wage-setting decisions in the entire economy.”

Paper Money Is Unfit for a World of High Crime and Low Inflation, Harvard University economist Kenneth Rogoff writes in ft.com. Abolishing physical currency would “eliminate the zero bound on policy interest rates that has handcuffed central banks since the financial crisis,” and address concerns that much of it is used for tax evasion and illegal activity, he writes. http://on.ft.com/RBoIX3

The ECB Eyes Danish Negativity. The WSJ’s Alen Mattich writes that if the ECB tries a modest negative deposit rate, it might help soften the euro but is unlikely to spur lending. “The question then is whether the ECB dares risk such an unconventional measure for potentially modest reward.”

Germany’s Constitutional Court May Help the Euro Zone. Germany’s Constitutional Court has been widely criticized for questioning the legality of the European Central Bank’s Outright Monetary Transactions (OMT). But Ashoka Mody, a former deputy director of the IMF’s European department, argues that in referring the program to the European Court of Justice, it may have “created an opening for a more durable political and economic solution, necessary for the euro to survive.” Mr. Mody contrasts that possible outcome with “the culture of quick-fixes on offer since the crisis started.”

– U.S. construction lending is seeing a slow, steady recovery. The volume of outstanding loans increased 2.1% in the first quarter from the fourth quarter to $214.3 billion, according to Federal Deposit Insurance Corp. data released Wednesday.