Grand Central: Is It Time to Stop Worrying About Inflation? – Real Time Economics

HANNON’S TAKE: IS IT TIME TO STOP WORRYING ABOUT INFLATION? 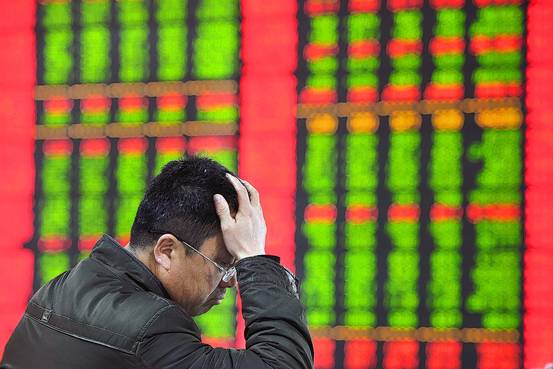 Should central bankers stop worrying so much about inflation, and concentrate on preventing financial crises?

The Bank for International Settlements has forcefully made the case for a change in established priorities, and some policy makers seem inclined to follow that advice, including Federal Reserve Bank of St. Louis President James Bullard.

On the face of it, a fresh revolution in central banking seems overdue. In developed economies, inflation has been low for more than two decades, and has recently been non-existent. While central bankers fretted over a decline in prices earlier this year, households and businesses appeared untroubled.

For anyone who grew up from the early 1990s onwards, it must be difficult to understand why inflation is such a big deal. The most rewarding way to grasp its debilitating effect on everyday life in the 1970s and 1980s is to read “Rabbit is Rich”, the third of John Updike’s quartet. Our hero spends more time speculating on krugerrands than selling automobiles–which is his job. And that’s the problem with persistently high inflation–managing it well becomes much more important to the prosperity of households and businesses than coming up with brilliant new ways of doing anything else.

The novel is set in 1979, the very year that Paul Volcker was appointed Fed chairman, ushering in an era in which central banks got serious about stabilizing prices. Back then, financial crises just weren’t a threat. There hadn’t been one for half a century. Now, of course, they seem much more likely to occur, and more damaging than any period of high inflation when they do, as underlined by continuing turmoil in China and Greece.

But there’s a problem. It’s not at all clear that central banks can prevent bubbles through their main interest rate tool, and at a cost that would be lower over the long term than the damage caused by another financial crisis. As my colleague Pedro Nicolaci da Costa explains, new research from the economists at the International Monetary Fund suggest newly available regulatory tools are a better option.

There may yet be another Paul Volcker moment, when central banks stop fighting the last war. But until policy makers are convinced that monetary policy is a tool that can prevent financial crises, we’re likely stuck with a framework that dates back to Harry Angstrom and his gold coins. 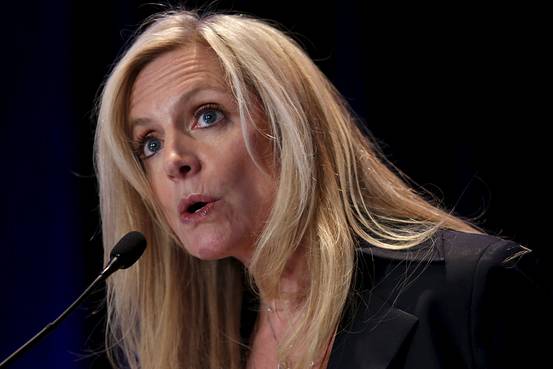 Brainard: Fed Should Consider Capital Surcharge in Stress Tests. Federal Reserve governor Lael Brainard on Thursday said the central bank should consider incorporating a planned capital surcharge into its annual “stress tests,” suggesting that a move opposed by bank executives is gaining traction at the central bank’s highest levels. Her comments will likely cause concern on Wall Street. Bank executives oppose including the impact of the surcharge in the stress tests because such a move would likely require them to beef up their levels of capital, which serves as a cushion against losses.

George: Fed Should Implement Modest Rate Rises Now. Kansas City Fed President Esther George renewed her call for the U.S. central bank to raise borrowing costs in the American economy, saying Thursday, “we would be wise to act modestly but act now.” Ms. George, who has long warned the Fed risks creating unstable markets and an inflation surge if it keeps rates too low for too long, said the U.S. economy has been growing and is likely to continue to grow.

Evans: Fed Should Wait Until Mid-2016 to Raise Rates Chicago Fed President Charles Evans said the  central bank should hold off on an interest-rate increase until mid-2016 as concerns remain over low inflation, risks abroad and the strength of the economy at home. Mr. Evans said overseas risks have grown since policy makers met last month, cautioning that acting too soon may only heighten the Fed’s challenges.

O’Malley Would Increase White House Influence on the Fed.  Former Maryland governor and Democratic presidential primary candidate Martin O’Malley is the latest politician to propose bringing the Federal Reserve more closely under White House influence. In a policy paper released Thursday, Mr. O’Malley called for having the U.S. president nominate the central bank’s general counsel and the president of the New York Fed. The nominees—like those to the Fed’s seven-member board of governors– would be subject to Senate confirmation, an O’Malley spokeswoman said. 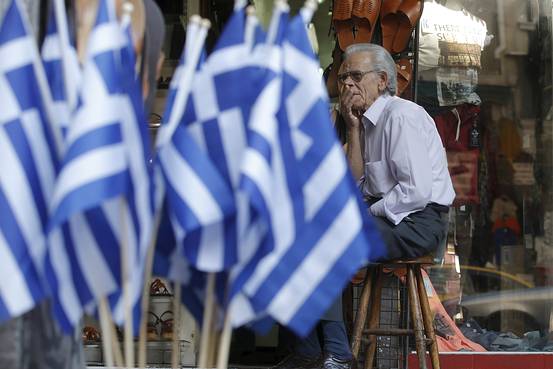 New Greek Proposal Appears Closer to Creditor Demands.  A new Greek proposal for economic policy overhauls and budget cuts appears to have moved closer to creditors’ demands on some of the most divisive issues, but there was no immediate word on whether it would be enough to unlock a new bailout package.

How Does the Eurosystem Work?

China’s President Faces Rare Backlash. With China’s markets having lost around a third of their value in the past month, and the government appearing to panic in its response to the drop, some people are starting to voice doubts about Chinese President Xi Jinping’s autocratic leadership style. The government’s scattershot efforts have included cutting interest rates and ordering state-run companies and brokerages to buy and hold stocks.

Delinquency on Home Equity Lowest Since 2008. The delinquency rate for fixed-term home-equity loans fell to 3.12% in the first quarter, the lowest rate since December 2008. Still, the rate remains above the 15-year average of 2.75%. 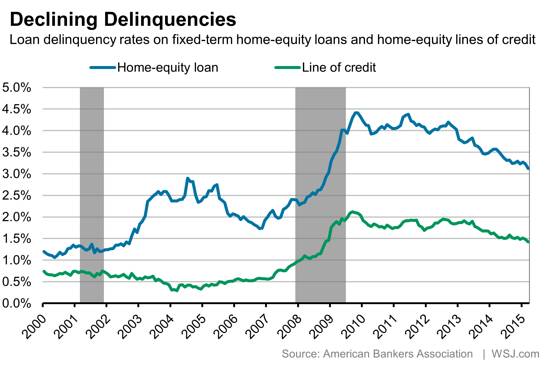 Consumption Patterns Have Changed Since the Great Recession, writes the Cleveland Fed’s LaVaughn Henry. “Age-based consumption profiles have been affected by differences in the growth rates of real income and prices since the onset of the Great Recession in 2008,” he writes. “The recession caused changes in both the absolute level of households’ consumption as well as the relative shares of income going to purchase necessities and luxuries.”

Don’t Let Greece Leave, Alberto Gallo writes in the Journal. “It’s time to face the root problem: Where debt isn’t sustainable, creditors must consider a renegotiation. And just as with private companies, debt renegotiation may mean a second chance for the firm to prosper and for creditors to recover their capital. The numbers speak clearly: If Greece leaves the euro, we are all losers.”

Stiglitz: U.S. Must Save Greece. Writing in Time, Joseph E. Stiglitz calls on the U.S. to intervene in Greece. “It is time for the U.S. to be generous with our friends in Greece in their time of need, as they have been crushed for the second time in a century by Germany, this time with the support of the troika,” he writes. “At a technical level, the Federal Reserve needs to create a swap line with Greece’s central bank, which—as a result of the default of the ECB in fulfilling its responsibilities—will have to take on once again the role of lender of last resort. Greece needs unconditional humanitarian aid; it needs Americans to buy its products, take vacations there, and show a solidarity with Greece and a humanity that its European partners were not able to display.”

PBOC Gives Glimpse of Its Bazooka.  Writing for the Journal, Aaron Back argues that efforts by the People’s Bank of China to halt a slide in share prices “looks like quantitative easing with Chinese characteristics.” “Instead of buying bonds, as many central banks around the world have done, China is effectively printing money to buy shares,” he writes. “The PBOC may hesitate to use this new easing tool extensively. If it does, it risks swelling the money supply and putting downward pressure on the yuan.”

IMF Sees 2015 Growth as Weakest Since Crisis. Global growth is set to slow this year to 3.3%, its weakest rate since the financial crisis, the International Monetary Fund said Thursday, as China and other emerging markets decelerate and advanced economies still struggle to shrug off the legacies of the crisis.

Jobless Claims Rise. Initial jobless claims, an estimate of layoffs, climbed 15,000 to a seasonally adjusted 297,000 in the week ended July 4, the Labor Department said Thursday. That was the highest level since February.

Canadian Housing Starts Up. Canadian housing starts rose 3% in June, beating expectations and offering a positive piece of economic data after a string of disappointing indicators.

Peru’s central bank on Thursday left its reference interest rate unchanged at 3.25%, as was widely expected by economists and central bank watchers. In a statement, the central bank said this interest rate level was in line with inflation that will move to 2% during the 2015 to 2016 period–Dow Jones Newswires.