Most Grand Central readers will be digesting the European Central Bank’s policy decisions Thursday, but while the ECB’s big day takes shape, let’s take a moment to look ahead one news cycle to the Labor Department’s jobs report due for release Friday morning.

The Federal Reserve is less than two weeks away from its June 17-18 policy meeting, when it will be releasing its updated forecasts for the economy and Chairwoman Janet Yellen will hold her second press conference. The jobs report is one of the last important pieces of data officials will have to digest before the next meeting.

Fed officials will be paying especially close attention Friday to developments in labor force participation and how that affects the unemployment rate. The jobless rate took a surprising tumble in April from 6.7% to 6.3%. Such a sizeable one-month decline has only happened three other times in the last quarter century and six times since 1980. Did the economy feel like it was going gangbusters in April; enough to drive down unemployment so much? Not really.

A closer look at the details of the report made the jobless rate decline look odder still. The drop was driven by an 806,000-person contraction in the Labor Department’s measurement of the labor force. A smaller labor force count means fewer people counted as unemployed, thus a lower jobless rate.  But declines in the labor force of this magnitude are very unusual. The labor force has only contracted that much in a month two other times since 1980. The labor force participation rate also dropped an unusually large 0.4 percentage points.

The household survey on which the jobless rate is based often delivers volatile numbers. The sample size in the survey, 60,000 households, is smaller than a separate survey of 144,000 businesses used to produce less volatile estimates of payroll employment growth. Given all of the quirks in the last household survey, it wouldn’t be surprising to see labor force participation pop back up. If it does, that might increase counts of the unemployed and the unemployment rate. That would support the Fed’s plan to keep short-term interest rates near zero for the foreseeable future. If, on the other hand, the jobless rate falls again, that would be a real surprise for Fed officials, and it will make their next policy meeting a lot more interesting because it could mean the job market is improving faster than they expected.

BOE Leaves Policy Unchanged. The Bank of England kept its benchmark interest rate steady Thursday to support the U.K. economy’s ongoing recovery, as figures showed house prices rose at the most rapid pace in almost 12 years during May.

Strong UK Data Inspire Thoughts of Earlier BOE Hike. With hard data and business surveys pointing to a continuation of the U.K.’s surprisingly strong recovery, economists are starting to contemplate an earlier date for the Bank of England’s first rate hike.

BOE’s Sharp Says UK Economy Still Vulnerable. The U.K. economy is still fragile despite a recent growth spurt and its financial system remains vulnerable to a variety of risks from at home and abroad, Richard Sharp, a member of the Bank of England’s financial stability panel said Wednesday.

U.K. House Prices Continue to Spiral Up. U.K. house prices rose at the fastest monthly pace in almost 12 years and to the highest level since before the global credit crisis in May, a survey showed Thursday, as demand for homes continues to outpace supply despite tougher new mortgage rules.

U.S. Bank Regulators Will Review Banking Rules. U.S. bank regulators plan to take a comprehensive look at existing regulations to determine which may be outdated or overly burdensome to the financial sector. The study, required every decade under a 1996 law, was announced Wednesday by the Federal Reserve and other bank regulators.

Banks Get Chance to Target ‘Burdensome’ Rules. Bankers and their lobbyists are being given a potent opportunity — the chance to scour the federal rulebook for regulations they want axed.

How the Insurance Industry Got Its Dodd-Frank Fix. The Senate’s approval of a bill giving the Federal Reserve more flexibility in setting capital standards for insurance companies was the product of a two year-old lobbying campaign by the industry. The bill is now headed to the House, where it is widely expected to pass unless Republican leaders move to change it substantially. Here are four reasons why this change to Dodd-Frank has fared so much better than any others.

Beige Book: U.S. Economic Activity Expanded in All Regions. Stronger consumer spending has boosted economic activity across the country in recent weeks, according to the Fed’s survey of regional conditions released Wednesday. The latest “beige book” pointed to an economy that was improving from weak growth earlier this year.

We read it, so you don’t have to: a dozen gems from the Fed’s latest Beige Book.

Yellen to Attend Jackson Hole Meetings in August. Former Fed Chairman Ben Bernanke caused a stir last year when he opted not to go. It was the first time since 1987 that a Fed chairman skipped the conference. Ms. Yellen plans to attend this year’s Jackson Hole conference and speak at it, according to people familiar with the matter.

No ‘Significant Slowdown’ Seen in China. International Monetary Fund Deputy Managing Director David Lipton said he didn’t see evidence of a “significant slowdown” in China’s economy and urged Beijing to be cautious in any stimulus effort.

China Will Meet Government’s Growth Target, OECD Head Says. China’s economy remains on course for sustained growth at the pace projected by the government, even as it shows occasional flashes of weakness and instability, according to the chief of the Organization for Economic Cooperation and Development.

China Central Bank Adds Cash to Financial System. China’s central bank added cash into the financial system Thursday, marking a fourth consecutive week of injections into banks that are already awash in cheap money. The extra liquidity and other “mini-stimulus” measures are encouraging banks to increase lending as a way to boost the sluggish economy. Beijing said May 30 that it would give banks more room to lend money to help small business and rural communities.

BOJ Officials Becoming Less Alarmed by Sluggish Exports. Some Bank of Japan officials are beginning to feel the economy can withstand the effects of the recent sales tax increase without much help from exports, people close to the central bank said, another sign the BOJ feels little pressure to act anytime soon.

BOJ Warns Euro Zone of Deflation Danger. On the day of a closely eyed European Central Bank policy meeting, a Bank of Japan board member warned of the risk of Europe slipping into chronic deflation, adding that slower growth in Europe could muddy the prospects for global growth.

Riksbank Seen Cutting In July, Despite Economy’s Revival. Policy makers at Sweden’s central bank will be heartened to see the country’s economic prospects improving, but the better data is unlikely to stop the Riksbank cutting interest rates next month as inflation remains low.

Chile Central Banker Signals Rate Cuts on Hold. Chile’s central bank President Rodrigo Vergara on Wednesday took a hawkish stance on inflation, suggesting that any cuts to the monetary policy rate might have to wait.

With Inflation Surging, Philippine Bank May Need to Tighten Policy. Inflation in the Philippines spiked to a 30-month high in May, approaching the top of the central bank’s target range and raising the odds of further tightening steps ahead.

Uganda Central Bank Cuts Key Lending Rate to 11%. Uganda’s central bank cut its key lending rate by 50 basis points to 11% on Wednesday, in an attempt to support the economy as inflation continues to ease.

BIS Chief: Regulators Should Pay Closer Attention to Capital Market Risks. Regulators need to pay closer attention to the potential risks to financial stability that may be lurking in capital markets, the head of the Bank for International Settlements said Wednesday. Jaime Caruana said capital markets are a welcome alternative to bank finance for borrowers in the real economy but could still harbor risks.

Hungary Denies Report on Merging Debt Center into Central Bank. Hungary’s central bank and the Prime Minister’s office both denied Wednesday a local press report that the country would plan to merge its state debt management center AKK into the central bank. Hungarian online business news agency Portfolio reported earlier in the day that the National Bank of Hungary would want a merger to help reduce the country’s financing costs and also improve the central bank’s operating costs.

Brazil Tax Change Could Boost Sinking Currency. The Brazilian government on Wednesday took steps that could shore up its sinking currency, in a move possibly aimed at controlling inflationary pressures.

Officials at the Fed are worried investors may be getting complacent about risks building in financial markets. The economy shrank in the first quarter. But economists think a new U.S. recession is unlikely, and their track record isn’t too bad. 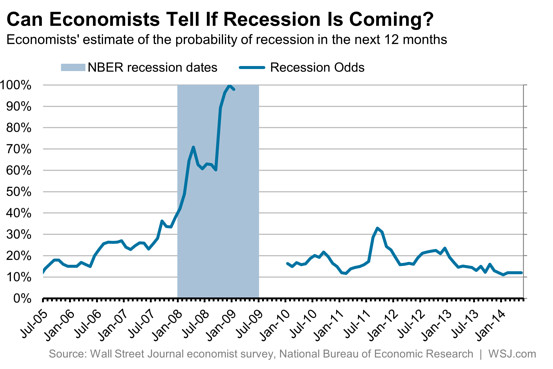 -ECB releases policy statement at 1145 GMT and President Draghi will hold a press conference at 1230 GMT. WSJ.com will host a live blog.

-The Journal’s Brian Blackstone and David Wessel will hold a live video Spreecast discussion of the ECB’s action at 2 p.m. EDT.

-The Philippines central bank releases minutes from its May 8 meeting

The June issue of the International Journal of Central Banking is out, with articles on everything from inflation targeting to the relationship between financial stability and monetary policy.

The Fed’s Beige Book isn’t worth much, writes Binyamin Appelbaum in The New York Times. “Fed watchers abhor a vacuum, so the Beige Book is carefully parsed for evidence of the Fed’s intentions. Save yourself the time.”

When it comes to weakening the euro, easier said than done, writes the Wall Street Journal’s Alen Mattich. “The market rule of thumb says that falling interest rates ought to result in a weakening currency. The exact opposite has happened in the euro zone during the past year.”

Inflation is returning to Japan, but “it needs to be said that this was largely achieved by exporting Japanese deflation to Europe – via a weaker yen,” writes the Wall Street Journal’s Michael Casey.

A negative ECB deposit rate may not change retail interest rates and bank lending in the euro area, and but could weaken the euro slightly, write Zsolt Darvas and Pia Huttl of the Bruegel think tank.

-Russia’s consumer inflation accelerated in May, making it less likely there will be a relaxation of the country’s tight monetary policy.

-After months of soaring prices, economists believe Brazil’s inflation fell to its slowest pace in May since last September.

-Dozens of U.S. companies have disclosed over the last week that their suppliers use gold refined by North Korea’s central bank.

–Jeff Bell, the newly minted Republican nominee for the U.S. Senate in New Jersey, says he wants to start a debate on monetary policy. “It just struck me that the whole cycle was going to go forward with no further debate on Fed policy unless I decided to come back to New Jersey and run,” he said. He faces an uphill battle against the well-funded Democratic incumbent, Sen. Cory Booker.