In her June press conference, Federal Reserve chairwoman Janet Yellen noted that the Fed’s plans for interest rates would change as the economic outlook changes. For example, “if the economy proves to be stronger than anticipated by the Committee, resulting in a more rapid convergence of employment and inflation to the FOMC’s objectives, then increases in the federal funds rate target are likely to occur sooner and to be more rapid than currently envisaged.”

The past week has provided new evidence that U.S. employment is converging more rapidly toward the Fed’s objectives than officials expected. Last December, when Fed officials wrote down forecasts for the unemployment rate in the coming years, they projected the rate would hit 6.1% or a bit lower by the fourth quarter of 2015. The Labor Department reported last week that it got there in June, a year-and-a-half sooner than officials expected just six months ago.

A broader measure of unemployment, including part-time workers who want full-time jobs and unemployed people not actively looking for work but who say they want a job and have looked for one in the past year, has fallen even more rapidly than the conventional jobless rate since December. The broad U-6 measure was down to 12.1% in June from 13.1% in December, outpacing the 0.6 percentage point decline in the jobless rate. The broad measure is still well above the 9% average that prevailed between the early 1990s and the financial crisis, but it is making up ground quickly.

Tuesday brought more evidence of an improving job market. Firms reported 4.6 million job openings in May. That was 721,000 more than in December and the most for a month since June 2007. The number of people who quit their jobs is also on the rise, a possible sign of workers’ willingness to take chances for new work opportunities. At 2.527 million in May, monthly quits were at their highest level since June 2008 and up more than 100,000 since December. Monthly hires are advancing too, at 4.718 in May, though they still have substantial ground to make up to reach pre-crisis levels that exceeded 5 million per month.

A number of Fed officials will be speaking publicly in the days ahead. The time seems ripe for them to acknowledge these improvements. Minutes of the Fed’s June policy meeting, to be released Wednesday, will also likely provide a new installment of Fed debate on the state of slack in labor markets.

Fed’s Kocherlakota Sees No Urgency To Raise Short-Term Rates. “I don’t make monetary policy according to a calendar,” Mr. Kocherlakota told reporters after a speech in Minneapolis. But he explained that a “necessary condition” for increasing short-term rates from near zero “should be that our one-to-two-year outlook” has inflation coming in at 2%, “or possibly above.”

Fed’s Lacker: ‘Middling’ Productivity Gains Will Restrain U.S. Economic Growth. He predicted the U.S. economy will grow at an average rate of 2% to 2.5% over the near term, estimates that are somewhat less optimistic than most of his central-bank colleagues.

House Republicans Want Fed to Adopt Policy Making Rule. Several House Republicans are embracing Stanford University economist John B. Taylor’s call for the Federal Reserve to adopt a mathematical rule for determining interest rates, stepping into a long-running debate among central bankers about how to set monetary policy.  See Mr. Taylor’s Commentary below in support of the move.

China’s Economy Likely Perked Up in Second Quarter . China’s economy looks to have improved in the second quarter, according to economists’ forecasts and the data released so far, thanks to a combination of better exports and a steady trickle of domestic stimulus measures.

BOJ Likely to Stick to Upbeat Inflation View. The Bank of Japan will likely stick to its upbeat view on inflation when its policy board meets next week, possibly stifling expectations for additional monetary easing in the coming months.

Currency Reserves Swell in Asia. Asia’s central banks snapped up dollars and other currencies in June at the fastest pace since 2011, bringing total foreign-currency reserves to $7.47 trillion, the latest in a series of records, in an effort to fend off the impact of a wave of cheap global capital.

ECB’s Coeure Plays Down Concerns About Euro. European Central Bank executive board member Benoit Coeure said Wednesday the strong euro is being integrated in monetary policy as he played down concerns about the currency’s strength.

Poland Still More Likely to Raise Rates Than Cut Them, Central Banker Says. That comes despite a recent change of tone toward neutral from the nation’s central bank, which prompted talk of rate cuts. The European Union’s largest emerging economy has shown signs that the continuing recovery–with growth at 1.1% in the first quarter–could be losing steam. But the data shouldn’t prompt the central bank to cut rates, said Andrzej Bratkowski, a member of the Polish central bank’s rates panel, in an interview.

Vietnam Central Bank: Stick to 12%-14% Loan Growth Target for This Year. The State Bank of Vietnam said Wednesday it will stick to its loan growth target of 12%-14% for this year to ensure “appropriate” economic growth, despite sluggish loan growth in the first half of this year. The country’s central bank said in a statement it will seek ways to boost lending to sufficiently meet businesses’ demand for funds to expand production – Dow Jones Newswires.

The number of job openings in the U.S. economy climbed to the highest level in 7 years, even as the number of people being hired was little changed from recent months, according to Labor Department’s monthly job openings and labor turnover survey. Fed Chairwoman Janet Yellen has said she is watching the report closely to see when the rate of people voluntarily quitting their jobs returns to normal. 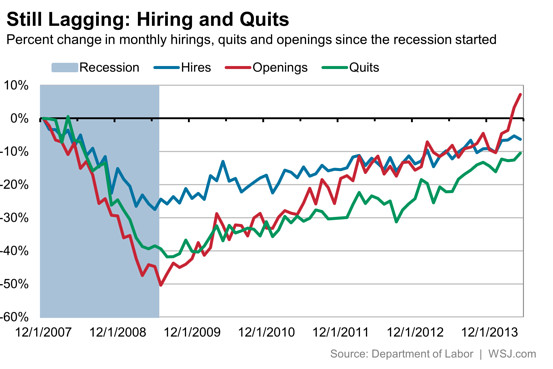 Job Separation Rate Shows Economic Shifts. The St. Louis Fed examines components of the job separation rate for an additional perspective on the labor market, beyond simply the unemployment rate. Voluntary separations and involuntary separations show how workers perceive the economy and how firms anticipate their staffing needs. “Workers who quit their jobs likely anticipate finding better work. Layoffs and discharges, on the other hand, bode poorly for the economy, as they demonstrate that firms are paring back staffing faster than can be accomplished simply by slowing hiring,” the economist found.

It’s good news that the “Federal Reserve Accountability and Transparency Act of 2014” was introduced into Congress, writes Stanford University economist John B. Taylor on his blog, Economics One. “A lot of research and experience shows that more predictable rules-based monetary policy leads to better economic performance.  But in practice there have been big swings in Fed policy between rules and discretion. This experience—especially the swing from rules to discretion in the past decade—demonstrates the need for legislation requiring the Fed to adopt rules for setting its policy instruments.”

-Fed Chairwoman Janet Yellen will deliver the semi-annual monetary policy report to the Senate Banking Committee July 15 and to the House Financial Services Committee on July 16, the panels said Tuesday.

-The amount of outstanding revolving credit held by Americans — mainly credit-card debt — rose at a seasonally adjusted annual rate of 2.5% to $872.2 billion in May, according to a Fed report released Tuesday.

-Brazil’s consumer inflation fell 0.4% in June, its slowest pace in nine months as the waning impact of a drought earlier this year caused food prices to decline.