Send us your questions via askcentralbanking@wsj.com. Please put “Ask WSJ Central Banks” in the subject line.

In an interview with The Wall Street Journal in June, Federal Reserve governor Jerome Powell said he expected the central bank to begin raising short-term interest rates in September and to increase rates a second time in December of this year. In an interview with CNBC Wednesday, Mr. Powell was non-committal about whether he would support a Fed move in September as he had earlier stated.

Have his views changed since June? It didn’t sound that way.

The economy has been performing about as he had been forecasting, Mr. Powell told CNBC. “We are on the same path of reasonable growth, better than reasonable job growth and inflation which is still well below our target,” he said, adding. “My approach hasn’t changed. My thinking hasn’t changed.”

Some market participants took Mr. Powell’s unwillingness to signal a September move as a push back against Atlanta Fed President Dennis Lockhart. Mr. Lockhart told The Wall Street Journal earlier this week he was inclined to move rates in September as long as economic data didn’t disappoint before then. Mr. Powell said Wednesday, “nothing has been decided.”

While they are taking different approaches at the moment about what they are prepared to signal on policy, the two don’t sound too far apart in terms of how they are reading the economy. Both are especially focused on labor market developments. Mr. Lockhart told the Journal that reduced labor market slack was giving him confidence that inflation would eventually start rising toward the Fed’s 2% objective. Mr. Powell said the labor market had been strong and he would be particularly focused on the next two Labor Department employment reports in assessing the economy’s progress.

The department’s July jobs report will be released Friday, when the Fed’s thinking on September will come more clearly into focus.

Fed’s Powell: No Decision Yet on September Rate Move. Federal Reserve governor Jerome Powell said an increase in short-term interest rates isn’t a done deal for the central bank’s September policy meeting, and he will be “very, very focused on the data between now and the meeting.” Mr. Powell told CNBC that “nothing has been decided” regarding the timing of the first rate increase.

Lockhart Interview Excerpts, Part 2. Atlanta Fed President Dennis Lockhart could revise down his forecast for the long-run outlook of the Fed’s benchmark federal funds rate, he said in an interview with The Wall Street Journal Monday. On Tuesday we published excerpts from the interview highlighting his comments on the possibility of a rate increase in September. Here are more excerpts, including remarks  about how his economic forecasts are evolving and glimmers of excess in the commercial real estate market.

Activists Keep Up Campaign Against Fed Rate Rises. A group of activists lobbying the Fed to hold off on raising interest rates is pressing its campaign amid signs from the central bank that it is moving closer to lifting borrowing costs. Members of the Fed Up Coalition, a left-leaning organization affiliated with the Center for Popular Democracy and connected with labor unions and community groups  recently have met with the leaders of the Boston, Kansas City and San Francisco Fed banks, and are scheduled to meet next with Atlanta Fed President Dennis Lockhart on Aug. 10 and with New York Fed President William Dudley on Aug. 12.

BOE Signals First Rate Move in Early 2016. The Bank of England, in its quarterly inflation report, signaled it’s unlikely to raise its key interest rate this year, but is on course to do so in the first six months of 2016. The BOE lowered its inflation forecast for the coming 12 months, but still believes inflation will return to its 2% target within two years if the central bank raises rates gradually and in line with market expectations.

Hungary’s Rate-Cutting Cycle Over, Central Bank Minutes Show. Hungary’s central bank rate-setters agreed in July to put an end to rate cutting as the policy rate is at a record low and keeping monetary conditions loose for an extended period will ensure meeting the medium-term inflation target. “The overwhelming majority of decision-makers agreed that the policy rate had reached a level that ensures the medium-term achievement of the inflation target and corresponds to an appropriate degree of support to the economy,” the minutes of the July 21 rate meeting, published on Wednesday, show. –Dow Jones Newswires

China Snaps Up Share of Asia Trade as U.S., Japan Lag. The share of Asian countries’ imports from China more than doubled from 2000 to 2014, while the share of Japan and the U.S. in Asian imports approximately halved, according to a study by Third Way, a centrist think tank in Washington that backs trade liberalization. 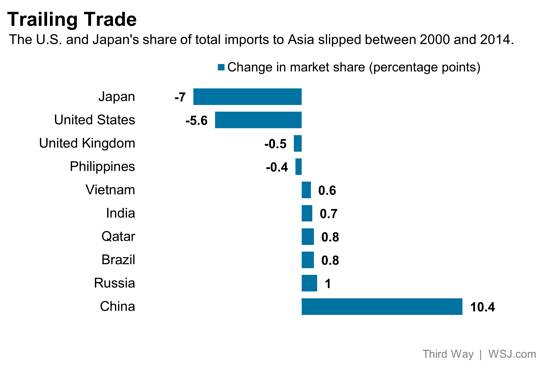 New York Fed: Gender Pay Gap Doesn’t Start Until Mid-Career. New research by the New York Fed finds women outearn men at the start of their careers – especially under certain majors such as engineering or art history. But “as workers approach mid-career, the wage premium that young women enjoy in these majors completely disappears and males earn a more-substantial premium in nearly every major.”

Macroprudential Regulation ‘Cannot Afford Imprudence and Negligence’ –VoxEU. Macroprudential measures, together with higher capital requirements, could be used to tame the build-up of leverage and credit booms in order to prevent financial crises, Xavier Freixas, Luc Laeven, José-Luis Peydró write in a posting on VoxEU.org, summarizing the findings of their new book on the subject, “Systemic Risk, Crises and Macroprudential Regulation.” But while curtailing excessive credit growth and building up capital buffers can help prevent and manage crises, banks will respond to new regulations by altering their risk profile in ways that can have unintended consequences, they say.

Suggestion for Greece: No Growth, No Debt Repayments. Lightening Greece’s debt burden is key to restoring confidence and growth in the Greek economy, the Max Planck Institute’s Armin von Bogdandy, DIW’s Marcel Fratzscher, and Bruegel’s Guntram Wolff write in a blogpost on Bruegel’s website. They suggest tying the interest rates on Greece’s loans to the growth rate of its economy, together with a conditional debt moratorium. “A Greece without growth should not pay any interest or make any repayments. The stronger the growth rate, the higher the interest and repayments to European creditors,” they write. “Such an approach would not reduce the incentives for reform. It is in the self-interest of any Greek government to pursue growth-friendly reforms,” they add.

–The U.S. trade gap expanded 7% in June, according to the Commerce Department, as the strong dollar pushed down demand for American-made goods overseas and imports climbed steadily.

–Canada’s trade deficit narrowed markedly in June as exports to the U.S. rose at the fastest pace in six years, offering a positive reading on a Canadian economy that has struggled so far this year.