SCHLESINGER’S TAKE
For the third time since January, the Bank of Japan Tuesday marked down its growth forecast for this year. Still, the central bank maintained a relatively sunny outlook for the period after that, as well as the bullish consensus view that inflation is on track to reach its 2% target at some point over the next couple of years.

The trends remain positive, the BOJ said in the statement issued after this month’s policy board meeting, where members once again decided to stick to the stimulus program adopted just over a year ago without adding any new money. In one of the few tweaks to what has become their boilerplate assessment of the current state of the economy, officials did add the phrase that progress continues “albeit with some fluctuations.”

This is, indeed, the season of fluctuations for Japan’s economy, with weak growth and inflation numbers upcoming. Private economists have been revisiting their initial sanguine assessment that the April 1 sales tax hike did only modest damage to growth. The latest consensus of professional forecasters issued by the Japan Center for Economic Research is for gross domestic product to fall at a 4.9% annualized pace in the quarter immediately following the increase — more than a percentage point worse than expected two months earlier, and the worst since the shock following Lehman Brothers collapse in 2008. Barclays Capital sees a second-quarter GDP drop of 7.3%, more than wiping out the pre-tax first-quarter surge.

More worrisome for the BOJ: a likely sharp deceleration in consumer inflation, after policymakers succeeded in just one year to halt the long trend of falling prices, and to push the main inflation gauge up to 1.5% in April. Rather than continue steadily toward the 2% mark, price increases are now widely expected to start slowing again, as energy costs fall, and as the effects wear off from last year’s sharp drop in the value of the yen, which pushed up import prices.

BOJ Gov. Haruhiko Kuroda braced markets for this trend in a late June speech, when he forecast for the first time that “through the summer… CPI is expected to slow to around 1%.” But after that, he sees other, domestic-bred “inflationary pressures” taking hold, such as tight labor markets that push up wages and prices.

However, many private forecasters see inflation falling below 1%, and staying there. At his post-meeting press conference Tuesday, Mr. Kuroda was asked repeatedly what he would do if the more bearish projections proved more accurate. “There is no possibility CPI will break below 1%,” he declared. Having drawn that line, Mr. Kuroda has perhaps now defined the trigger for what could prompt the additional stimulus markets have been awaiting, so far in vain.

What to Watch in Yellen’s Testimony This Week. When Federal Reserve Chairwoman Janet Yellen presented her semiannual testimony to Congress in February the jobless rate was 6.7% and annual inflation was 1.2%. When she returns for two days of testimony Tuesday and Wednesday, she will have a 6.1% jobless rate and 1.8% inflation to report to lawmakers. What matters most in her testimony will be how she explains these developments, particularly the job market’s improvement.

Yellen Could Get Quizzed on Legislation Aimed at the Fed. A member of the Senate Banking Committee has proposed an amendment to require the Fed Board have at least one member with community-banking experience. The House Financial Services Committee just held a hearing on a bill that woul, among other things, require the Fed to adopt a formal rule to guide monetary policy decisions.

Hand on the Lever: How Janet Yellen is Redefining the Federal Reserve—A New Yorker Profile.

BOJ Trims Growth Forecast. The Bank of Japan slightly cut its growth outlook in a new projection released Tuesday, but kept its policy on hold and maintained a bullish consumer-price forecast, suggesting officials feel little urgency to add to their aggressive stimulus measures.

IMF Touts Quantitative Easing Benefits for ECB. Large-scale purchases of government bonds by the ECB would boost euro zone inflation and stimulate demand for bank credit, the International Monetary Fund said Monday in its latest effort to tout the potential benefits of quantitative easing in Europe.

ECB Liquidity Plans Will Be Reflected in the Euro’s Value – Report. The European Central Bank’s plans to generate long-term liquidity will be reflected in the value of the common currency, the central bank’s chief economist Peter Praet said in an interview with French paper Les Echos.

Inflation Outlook to Top Takeaways from Canada Central Bank Meeting. The spotlight will fall on the Bank of Canada’s inflation outlook when it issues its latest interest-rate decision Wednesday. With consumer prices trending higher, markets are watching its inflation narrative closely, given that the central bank sets monetary policy to achieve a 2% inflation target.

Canada’s Central Banker Talks Housing Bubble, Missing Exports. Stephen Poloz, governor of the Bank of Canada, predicts a soft landing for housing and says he’s not too worried about financial bubbles in a wide-ranging interview with The Wall Street Journal.

In Canada, a Case of the Missing U.S. Exports. Bank of Canada Bov. Stephen Poloz tasked the central bank’s economists with finding out why Canada’s nonenergy exports to the U.S. did not rebound during the recovery as predicted by traditional models.

Australia Central Bank Says Rates to Stay Low. Australia’s central bank continues to expect low interest for some time as the economy stays sluggish and a high currency hurts exports. In the minutes of its July 1 policy meeting, published Tuesday. The Reserve Bank of Australia said the most prudent course likely would be a period of stable interest rates.

Australian Dollar Is Overvalued, Says RBA’s Edwards. The Australian dollar is overvalued, and any relief for the nation’s exporters may have to wait until the U.S. begins raising interest rates, John Edwards, a member of the Reserve Bank of Australia’s interest-rate-setting board, said Tuesday.

Turkey’s Central Bank Likely to Cut Interest Rates. The central bank is likely to cut rates between 50 bps and 100 bps at its monthly Monetary Policy Committee meeting Thursday, according to the findings of 12 economists surveyed by Dow Jones Newswires. The central bank cut its benchmark one-week repo rate by 75 bps to 8.75% last month, leaving its overnight lending rate and overnight borrowing rates at 12% and 8%, respectively.-Dow Jones Newswires

Financial Stability Board Releases Paper on Currencies Benchmarks. The Basel-based FSB, which coordinates global regulatory efforts, released a consultation paper Tuesday to flesh out possible ways in which currencies benchmarks might be altered in the wake of global investigations into their integrity, with the focus falling largely on traders’ behavior. –Dow Jones Newswires.

GRAPHIC CONTENT
The U.S. economy has been too weak for many workers to undertake the sort of job-hopping that economists say is critical to building careers and advancing the nation’s long-run growth prospects. 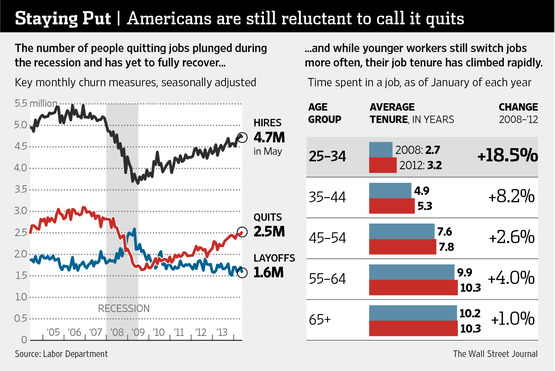 FORWARD GUIDANCE
– Fed’s Yellen testifies before the Senate Banking Committee at 10 a.m. EDT in Washington. The Journal’s Sudeep Reddy and Josh Zumbrun will be live-blogging her remarks on Real Time Economics.

BASIS POINTS
– Inflation accelerated in the U.K. in June and house prices continued their upward march in May, signs the economy continues to strengthen and that a rise in interest rates may be getting closer.

– Industrial production in the 18-member euro zone declined sharply in May, another sign that the currency area’s economic recovery remains weak.

– India’s wholesale inflation rate eased to its lowest level in four months in June as food prices cooled, but the relief could be temporary as weak seasonal rainfall is expected to lift prices again.