The outcome of the Federal Reserve’s September meeting was clearly dovish in that it left the central bank’s easy money policies in place for a while longer. Policy makers repeated their assurance that short-term interest rates would remain near zero for a “considerable time” after their bond-buying program ends. That was a relief to investors who worried the phrase would get scrapped as a signal that rate increases might be coming sooner than they expected.

Yet some analysts seized on the Fed’s so-called dot chart, which depicts officials’ individual forecasts for the path of rates, as indicating a more hawkish tilt, signaling rates could rise more quickly in coming years than widely anticipated. Some analysts attributed the dollar’s extended rally to the shift.

This, despite Ms. Yellen’s warnings not to pay the dots too much mind.

She warned at a press conference in March, “one should not look to the dot plot so to speak as the primary way in which the committee wants to or is speaking about policy to the public at large.”

At her press conference Wednesday, she downplayed the dots’ value again, saying, “What you don’t see in the dot–so-called dot plot, is also the uncertainty that each individual, each participant, sees around their own projection. So, things will depend on how the economy evolves. That will change over time and there’s a good deal of uncertainty associated with it.”

If that wasn’t enough, analysts such as Michael Hanson of Bank of America-Merrill Lynch note that all dots are not created equal. Some Fed officials have more influence in policy discussions than others, but the dots are not identified by name. Their anonymity makes it impossible for observers to assign the right weights to them.

Yellen Highlights Deepening U.S. Poverty. Ms. Yellen said Thursday the recession left lasting scars on the poorest American families that have yet to heal more than five years into the recovery. “We have come far from the worst moments of the crisis, and the economy continues to improve,” Ms. Yellen told a conference sponsored by the Corporation for Enterprise Development, a community development organization.

Fed Takes Enforcement Action Against Santander’s U.S. Unit. The Fed took enforcement action against Banco Santander’s U.S. unit for violating a restriction on paying dividends, forcing the Spanish bank to repay the subsidiary the lost capital and barring the unit from additional dividend payouts. On May 1, a unit of Santander Holdings USA, Inc. declared a roughly $52 million dividend, despite being under dividend constraints since failing the Fed’s financial stress test in March.

Ron Paul Legacy Lives on as House Passes Fed Audit Bill. The House passed a bill that would open the Federal Reserve’s activities, including its deliberations on interest rate policy, to increased congressional scrutiny. The legislation would direct the Government Accountability Office to conduct a “full audit” of the Fed’s operations and report back to Congress. Currently, the GAO reviews the central bank’s financial operations, but not its policy decisions or agreements with foreign governments and central banks. The bill is likely to face more opposition in the Senate, which is controlled by Democrats.

Philly Fed Factory Survey Gets a Sibling. The Philadelphia Fed announces the launch of a nonmanufacturing survey which will complement its already established and market-moving manufacturing business-outlook survey. The two “will allow the Philadelphia Fed to more fully capture economic activity in its district, which includes eastern Pennsylvania, southern New Jersey, and Delaware.” The first report will be released Tuesday. –Dow Jones Newswires

The TLTRO Disappoints. What’s Next, ECB? A new loan facility the European Central Bank hopes will kick-start growth in the Eurozone by encouraging banks to lend to the private sector has begun. The program is known as Targeted Longer-Term Refinancing Operations, or TLTRO. Here’s an explainer on why it exists and how it works.

Analysts’ Roundup of the ECB’s TLTRO Program. Cheap money over a long time. What’s not to like? Well it seems that not all banks have gone gung-ho for the ECB’s TLTRO program. Some market watchers said this could spark fresh speculation that the ECB will resort to even more drastic stimulus measures. But others suggest caution, especially ahead of the second program in December.

British Pound Rises as Scotland Rejects Independence in Referendum. Scottish voters’ decision to stick with the rest of the U.K. has boosted sterling, lifted stocks and reset market expectations for the path of the country’s interest rates, but also left investors with gnawing doubts about the long-term political outlook.

Japan Cuts September Economic Assessment. Japan downgraded its overall assessment of the economy in September for the first time in five months, as poor summer weather weighed on consumption, raising further questions over the viability of pushing ahead with a second sales-tax increase after the first one in April hurt demand and stalled growth.

South African Central Bank Governor to Step Down in November. South African Reserve Bank Governor Gill Marcus said Thursday that she will step down when her contract expires in November, bringing to an end a tenure that turned the country’s top banker into a persistent critic of her government’s economic policy.

Five Things to Know About New Zealand’s Election. New Zealanders go to the polls Saturday. Here are five things to know about the election and its impact on the economy.

Americans’ wealth hit the highest level ever in the second quarter amid a rise in stock and home prices, prompting consumers to ramp up their borrowing—a development that could boost the economic recovery. The net worth of U.S. households and nonprofit organizations—the value of homes, stocks and other assets minus debts and other liabilities—rose 1.7%, or about $1.4 trillion, between April and June to $81.5 trillion, the highest on record, according to a report by the Federal Reserve released Thursday. The figures are not adjusted for inflation or population. 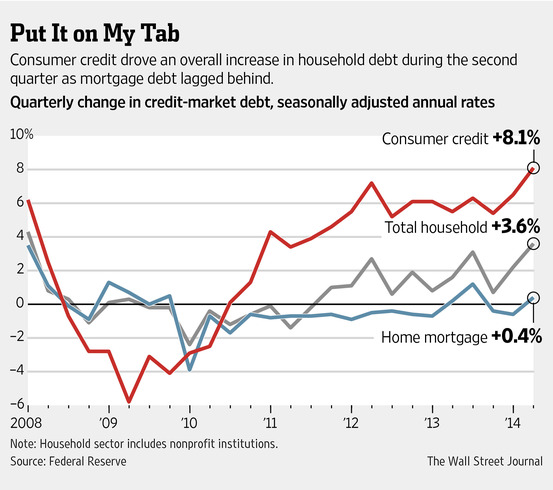 -Bank of Mexico releases minutes from its Sept. 5 policy meeting

-Finance ministers and central-bank governors from the Group of 20 nations meet in Cairns, Australia

-Finance ministers and central-bank governors from the Group of 20 nations meet in Cairns, Australia

Revised Payroll Data Show Better Mix of Jobs, Nearly Same Total. The Labor Department’s number crunchers pretty much nailed it. A preliminary annual revision to payroll data, released Thursday, shows an earlier count of how many people were employed in the U.S. in March was off by just 7,000. (Total payrolls equaled 138 million that month.) The adjustment of less than 0.05% would be the smallest annual revision in at least the past 10 years if the preliminary numbers hold when they’re finalized early next year. Typically annual revisions move the total payroll figure by 0.3%, or by a few hundred thousand jobs.

“The U.S. Federal Reserve is trying to squeeze a bit more out of a stimulus policy that relies heavily on artificially boosting stock and bond markets to generate growth,” writes Mohamed El-Erian in Bloomberg View. “In doing so, it is running a higher risk of financial instability, and increasing its dependence on a Congress that shows little sign of being able to handle fully its economic responsibilities. The trade-off will work well for Main Street, as opposed to just Wall Street and the wealthy, only if the government and companies take the growth baton from the Fed — for example, by investing in infrastructure and expansion.”

-Ireland’s economy was the fastest-growing in Europe during the three months to June as it continued to recover from a property-market and banking collapse that forced the government to rely on financing from the International Monetary Fund and the European Union until late last year.

-U.S. home construction fell last month 14.4% after surging to a post-recession high in July, a sign of choppy progress in the housing market.

-The number of new applications for U.S. unemployment benefits dropped last week by 36,000 to 280,000, near post-recession lows and the latest indication layoffs are trending sharply lower amid generally improving economic conditions.