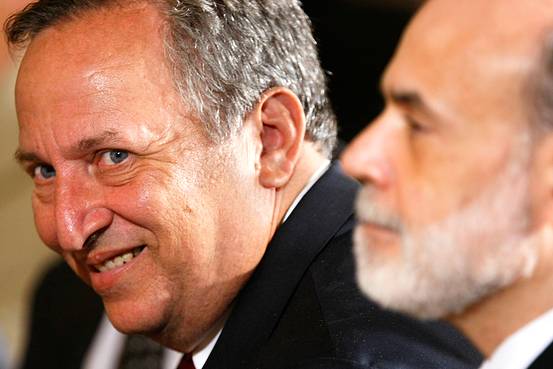 Kenneth Rogoff, the Harvard professor and author of the book “This Time is Different,” weighs in with an alternative explanation for the slow growth and low interest rates that paint over the global economy and puzzle so many central bankers these days.

In Mr. Rogoff’s view, it is all about the debt.

The world economy is playing out a familiar cycle of credit expansion, asset boom, and then sharp reversal. “As credit booms, asset prices rise, raising their value as collateral, thereby helping to expand credit and raise asset prices even more. When the bubble ultimately bursts, often catalysed by an underlying adverse shock to the real economy, the whole process spins into a harsh and precipitous reverse,” Mr. Rogoff says in a paper taking issue with his colleague Lawrence Summers, whose writings on secular stagnation ignited the debate.

Everyone seems to want to disagree with Mr. Summers these days. In a blog post earlier this month, former Fed Chairman Ben Bernanke took aim at the Summers’ idea that the world is plagued by a chronic excess of saving and dearth of investment demand. Mr. Bernanke argues it is hard to imagine the kind of shortfall of profitable investments Mr. Summers describes.

(A side note of interest. Mr. Summers, Mr. Bernanke and Mr. Rogoff all studied at the Massachusetts Institute of Technology in the late 1970s. Their presence at the center of this debate is testament to MIT’s dominance a generation ago.)

The Summers and Bernanke debate focuses on the puzzle of exceptionally low interest rates, but not so much on the debt cycle that preceded them. Mr. Rogoff tries to fill that void. Secular stagnation shows how long-running trends, such an aging population or declining productivity, might lead to slow growth and low rates. It doesn’t say much about the credit boom that brought the global economy to its knees six years ago. “The secular stagnation view does not capture the heart attack the global economy experienced; slow-moving demographics do not explain sharp housing price bubbles and collapses,” Mr. Rogoff argues.

Interest rates are low, he says, because investors are averse to risk, governments are forcing banks to hold low-risk government debt and central bankers are pushing rates down, he says. This view leads to different prescriptions for the problems that now nag the global economy. Mr. Summers argues for government borrowing to fund investment. Mr. Rogoff wonders if the solution to a debt supercycle is really more debt. “It is highly superficial and dangerous to argue that debt is basically free,” he says.

The good news here is that debt cycles don’t last forever. “As the economy recovers,” Mr. Rogoff says, “the economy will be in position for a new rising phase of the leverage cycle. Over time, financial innovation will bypass some of the more onerous regulations. If so, real interest rates will rise though the overall credit surface facing the economy will flatten and ease.” 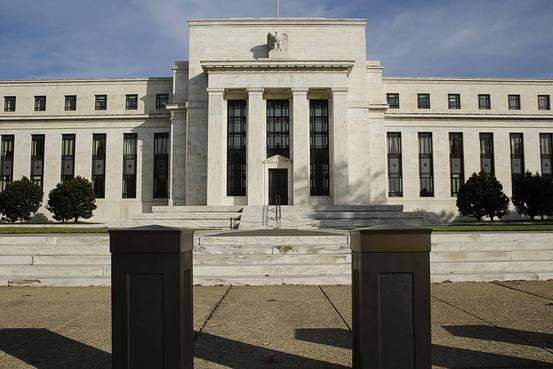 FedSpeak CheatSheet: Fed Officials Could Wait Longer to Raise Rates. The only suspense about this week’s Federal Reserve policy meeting surrounds how officials’ post-meeting statement will characterize the winter slowdown in U.S. growth. A small number of policy makers still want to start raising their benchmark short-term interest rate from near zero this summer, but others sound increasingly inclined to wait until the fall or even later to act. Here are some key excerpts from Fed officials’ public remarks since their March meeting.

OCC’s Curry Opposes Volcker Plan to Abolish OCC. Former Fed Chairman Paul Volcker earlier this week outlined a plan to consolidate financial regulatory agencies, in part by eliminating the Office of the Comptroller of the Currency. The head of the OCC begs to differ. “While I have great respect for Mr. Volcker, I disagree with him completely on this issue,” wrote Comptroller Thomas Curry in an email to employees.

ECB’s Mersch: Not Punishing Countries That Break Fiscal Rules Hits Credibility. Recent decisions by the European Union’s executive arm not to punish countries for violating fiscal rules, weaken their credibility, a member of the European Central Bank’s Executive Board said Friday. Yves Mersch flagged recent “non-decisions” by the European Commission such as not to intensify a so-called Excessive Deficit Procedure against France and to allow the country two more years to get its finances in line with EU rules.

Eurozone Inflation Likely to Move Out of Negative Territory. Economists expect data due this week to show that inflation in the eurozone came back from negative territory and was flat in April, a further sign the expansionist policies of the European Central Bank managed to spark price growth in the 19-nation bloc. –Dow Jones Newswires. 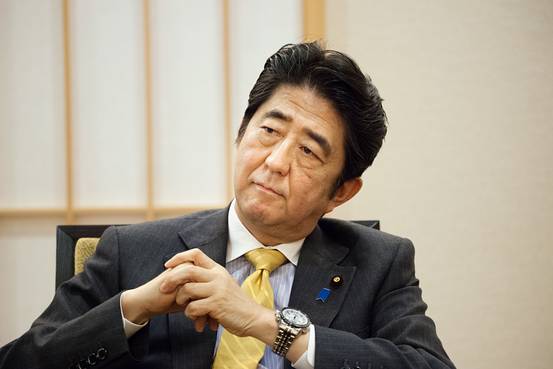 Global Policy Dilemma: Too Much of Almost Everything. The global economy is awash as never before in commodities like oil, cotton and iron ore, but also with capital and labor—a glut that presents several challenges as policy makers struggle to stoke demand. The surfeit of commodities depresses prices and stokes concerns of deflation. A vast supply of savings and capital is helping to hold down interest rates, undermining the power of monetary policy. And the surplus of workers depresses wages.

Growing Doubts About China’s Growth Stats. When China released its estimate of first quarter growth earlier this month, the 7% figure—the worst in six years—stirred fears of a deepening slowdown. It also raised fresh doubt about the trustworthiness of China’s own statistics. “Growth Likely Overstated,” said a Citibank report, concluding that actual quarterly growth could be below 6% year on year. Other research firms put their numbers far lower.

Do Strong Religious Beliefs Stifle Innovation? Countries that are intensely religious are typically less innovative than those that aren’t, according to a new paper published by the National Bureau of Economic Research. The study, titled “Forbidden Fruits: The Political Economy of Science, Religion, and Growth,” compares religious beliefs and belief in God with scientific innovation as measured by issuance of patents. 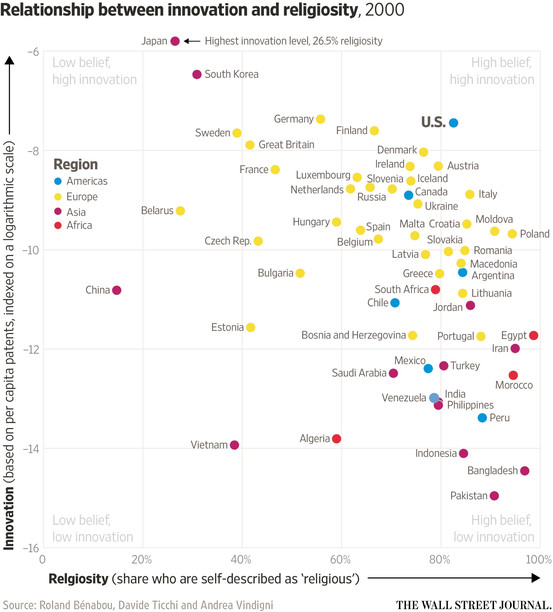 Rivlin: Inflation is Not a Threat. “I don’t see inflation as something we need to worry about right now,” Alice Rivlin said in an interview with MarketWatch. “Even if we had some kind of shock that sent prices up for some reason, the Fed has the tools to stop inflation. That’s not very hard. And we’re unlikely to get into a self-perpetuating spiral because the economy is much more competitive than it used to be and because we haven’t had inflation for such a long time. There is a whole generation of people who don’t remember inflation. They don’t know what it is. And so I think inflation is a non-existent threat.

Rogoff: “Debt Supercycle, Not Secular Stagnation.”  “Weak, post-Crisis growth has been blamed on secular stagnation,” Harvard University’s Kenneth Rogoff notes in a column published on voxeu.org. He writes, “the ‘financial crisis/debt supercycle’ view provides a more accurate and useful framework for understanding what has transpired and what is likely to come next. The difference matters. Unlike secular stagnation, a debt supercycle is not forever. After deleveraging and borrowing headwinds subside, expected growth trends might prove higher than simple extrapolations of recent performance might suggest.”

Three Tough Choices for ECB on Greece.  ”At its weekly meeting on April 29, the ECB will be under tremendous pressure to keep Greece on its life support system,” writes Mohamed El-Erian on Bloomberg View. “But without progress elsewhere, this powerful monetary institution is at risk of joining other actors in the Greek drama that are unintentionally transitioning from being a major part of the solution to a big part of the problem now and in the future.”

Eurozone Risks Bad Inflation After Good Deflation. “As an importer of gas and oil, falling energy prices are a net positive for the economy, giving firms and households more disposable income. Some have called this good deflation,” writes Alen Mattich in the Wall Street Journal. “But with oil prices starting to rebound, energy is taking a bigger bite out of people’s purses. At the same time, the euro’s sharp depreciation has added further upward pressure on prices. To be sure, this has yet to register in the official data, which show inflation remains at rock bottom levels. But higher inflation seems to be coming.”

-The Colombian Central Bank on Friday left its benchmark interest rate of 4.5% unchanged in a bid to spur a slowing economy.