HILSENRATH’S TAKE
The Federal Reserve’s Jackson Hole meetings are almost a week away. The theme of this year’s event is the economy’s damaged labor markets, but officials will have a growing collection of good news to consider during their three-day sojourn in the Wyoming mountains.

Because the recession was so deep, there are still signs of slack in labor markets – for instance high levels of part-time workers who want full-time jobs and the long-term unemployed. But the underlying theme of the latest data is that the economy has begun the second half of 2014 with clear momentum in labor markets. That’s good news for Americans which will present challenges for Fed officials as they consider when to raise short-term interest rates from very low levels.

Banks Retreat From Repo Market in Face of New Fed Regulations. A critical part of the plumbing that keeps money flowing through the financial system is experiencing turmoil as new regulations prompt banks to step back from the multitrillion-dollar “repo” market. Risks posed by the repo market are the focus of a conference on Wednesday sponsored by the Federal Reserve Bank of New York.

Banks Push to Delay Volcker Rule on Investments. Banks are pressing U.S. policy makers for a multiyear delay of a rule requiring them to sell investments in private-equity and venture-capital funds, the latest industry push to scale back a central provision of the 2010 Dodd-Frank law. Bank officials, trade groups and lawmakers are quietly lobbying the Federal Reserve to grant a reprieve of up to seven years from a provision that limits banks’ investments in private-equity and venture-capital funds, according to people familiar with the effort.

Bank of England Signals Rate Hike in Early 2015 if Wage Growth Picks Up. The central bank said in its quarterly Inflation Report that annual inflation will stay at roughly 2% over the next two to three years as long as interest rates rise in line with the expectations in financial markets. Investors expect that the BOE will raise its benchmark interest rate from a historic low of 0.5% in the first quarter of 2015.

Japan’s Sharp GDP Slump Spurs Stimulus Talk. A sharp second-quarter slowdown in Japan raised discussion among economists about further stimulus, but the economy minister said he didn’t think extra steps were needed now. Japan’s real gross domestic product, the total value of all goods and services produced in the economy, shrank 6.8% in the three months through June on an annualized basis from the prior quarter. The main reason was a sharp pullback by consumers after the national sales tax rose on April 1 to 8% from 5%.

BOJ Minutes Show Some Members Cautious about 2% Inflation Target. Minutes of the Bank of Japan’s July meeting, released Wednesday, showed some policy board members said there seemed to be “a high degree of uncertainty” around the majority view that consumer price inflation will likely reach 2.0% in the next business year starting April. –Dow Jones Newswires.

Germany’s Economic Growth at Risk From Crises. Germany’s economic momentum slowed in the second quarter amid a “very hesitant” recovery in the euro zone and uncertainty caused by the crises in Ukraine and the Middle East, Germany’s Economics Ministry said on Tuesday.

Ukraine Crisis Forces Bank of Russia to Revise Forecasts. Rising uncertainty about the fallout from the crisis in Ukraine and Western sanctions against Moscow will force the Bank of Russia into a wide-scale revision of economic forecasts, the central bank said Tuesday. The bank is currently revising all the forecasts and is planning to present the updated outlook in September.

Ukraine’s Currency Hits All-Time Low. Ukraine’s currency hit an all-time low against the U.S. dollar on Tuesday as fighting in the country’s eastern regions continued and foreign exchange reserves fell. National Bank of Ukraine Gov. Valeria Gontareva told Parliament the currency’s depreciation is driven solely by jittery market sentiment on the back of increased tensions in the country’s east, and the rate will stabilize when the fighting is over.

What to Watch Ahead of Thursday’s Euro-Zone GDP Report. Gross domestic product is expected to have expanded just 0.1% from the previous quarter, according to a survey of economists, or around 0.4% in annualized terms. That’s half the first quarter’s weak gain and far below what is needed to significantly reduce unemployment or alleviate debt burdens.

GRAPHIC CONTENT
Employers posted more job openings in June than they did a month earlier, and the number of U.S. workers who quit their jobs climbed, signaling steady improvement in the labor market. Employers had 4.7 million job openings on the last business day of June, up from 4.6 million a month earlier, the Labor Department said Tuesday. That marked the highest number of openings in 13 years. The number of workers hired clicked up to 4.8 million from May’s 4.7 million. Meantime, 2.53 million Americans quit a job in June, up from 2.49 million who did so in May. 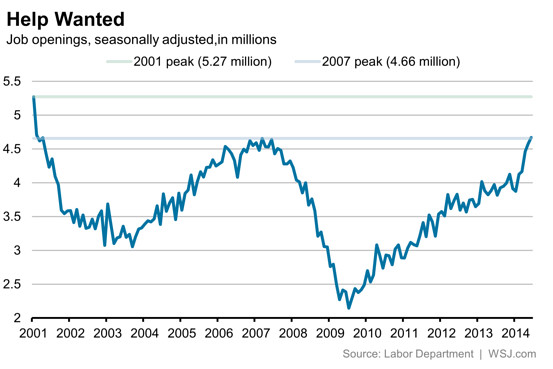 RESEARCH
Productivity, Nationalization and the Role of “News:” Lessons from the 1970s. Nationalization efforts by oil-producing nations during the 1970s were associated with big declines in labor productivity, Nida Cakir Melek wrote in a recent Kansas City Fed working paper. In the case of Venezuela, which fully nationalized its oil industry in 1975, production and productivity both began declining five years earlier. “We propose that the fast extraction, declining exploration, and the contraction in manpower prior to 1970 were driven by the news about the future nationalization.”

COMMENTARY
The Fed is watching the labor market closely, “but the Fed and Fed watchers should also be looking at business loan conditions,” Robert Litan, a senior fellow at the Brookings Institution, writes for Capital Journal’s Think Tank. “Sure, the time is approaching when the Fed will have to tighten. But for business borrowers, the loan market is still not back to where things stood about eight years ago.”

Josh Bivens, deputy director of research and policy at the Economic Policy Institute, writing for Capital Journal’s Think Tank, calls for taking the long view when discussing wage data and Fed policy. “Historical data on wages, along with the many indications that forces–including economic policies–put great downward pressure on them, indicate that most people hold the wrong worry regarding pay. The concern shouldn’t be that wages will defy all previous trends and, out of the blue, spark a wage-price spiral (something that hasn’t happened since the 1970s oil shocks). The right concern is that the Fed won’t be able to do enough to ensure decent wage growth for workers in the coming years.”

Economists don’t really understand why the U.S. jobless rate was so high during and after the recession because “we do not have a model that is rich enough to account for the many factors driving unemployment – including aggregate demand – and simple enough to lend itself to pencil-and-paper analysis,” Pascal Michaillat and Emmanuel Saez write in a voxeu.com column.

Alan Greenspan’s time as chairman of the Fed “was one of the most interesting and, to be blunt, weirdest tenures ever for a Fed chairman,” Barry Ritholtz writes in a Bloomberg View column. “This was largely because of the strange ways Greenspan’s infatuation with the philosophy of Ayn Rand manifested themselves. He was a free marketer who loved to intervene in the markets, a chief bank regulator who seemingly failed to understand even the most basic premise of bank regulations.”

BASIS POINTS
– Euro-zone industrial production fell 0.3% in June from May, the second consecutive monthly drop and an indication that the currency area’s economic recovery may have faltered again in the second quarter.

– Canada’s statistics agency found an error in its July employment report — which had suggested the economy created a meager 200 jobs, well below expectations — and it plans to release new data Friday.