Inflation expectations are behaving differently. In Europe, inflation expectations have been sinking for a year and took a particularly sharp drop in August. Expectations for inflation over a five-year horizon beginning five years from now dropped to 1.95% last week, from 2.11% a month earlier and 2.26% a year before, as measured in swaps markets. Those aren’t dramatic drops but they catch the eye.

In the U.S., on the other hand, inflation expectations have been steady. Expectations for future inflation were 2.77% last week, compared with 2.87% a month ago and 2.82% a year earlier.

“Both have declined recently, but Europe has declined by more and towards the lows of the long term range,” said Michael Pond, interest rate strategist at Barclays Capital, which tracks expectations as signaled in swaps markets. “It is a mark of ECB credibility…and if they were to wait to show concern about its decline until it becomes alarming, they may risk an unmanageable de-anchoring of inflation expectations.”

Mr. Draghi is worried about a drift toward Japan-like deflation. Ms. Yellen is looking at stable expectations and patiently calculating when the economy will be strong enough to start moving rates up. It helps explain the divergent paths of the central banks, and why the euro has sunk 4% against the dollar this year.

Fed Policy, Revenues, Help Relieve U.S. Budget Pressure: CBO. The Federal Reserve has helped put the federal budget on a more sustainable path by holding interest rates very low and making big payments to the U.S. Treasury, according to a new report from the Congressional Budget Office. The federal budget deficit over the next decade will be smaller than previously forecast as the government continues to benefit from low borrowing costs.

As Month End Nears, Fed Reverse Repo Volume Ticks Up. As month-end looms, activity is ticking higher at the Fed’s experimental reverse repo facility. Wednesday’s operation saw dealers park $180 billion on the Fed’s books in exchange for a one-day loan of Treasurys, up from $157 billion on Tuesday. That’s the biggest size seen since the $339 billion operation seen on the final day of June. Quarter and month ends often see huge spikes in activity because a lot of banks and financial firms like to do business directly with the Fed then. It gives them a risk-free investment and allows the firms to report the seemingly high-quality way in which they manage money, in a practice many call window dressing. –Dow Jones Newswires

ECB Selects BlackRock Solutions as Adviser on ABS Program. The European Central Bank has selected BlackRock Solutions, a unit of global investment manager BlackRock Inc., to be its consultant on developing a program for purchases of packages of loans known as asset-backed securities, an ECB spokesman said Wednesday. The hope is that if banks can more easily package loans, then they will be more willing to extend credit to firms and households in the euro zone, which have struggled to gain financing for investment plans. –Dow Jones Newswires

French PM Pressures ECB to go Further and Faster. French Prime Minister Manuel Valls on Wednesday kept up the pressure on the ECB to do more to fight low inflation and bring down the value of the euro.

India’s Rajan: Inflation on Target. Indian central bank Gov. Raghuram Rajan said Wednesday he is determined to curb inflation in Asia’s third-largest economy and that interest-rate decisions would be guided by changes in consumer prices.

India Central Bank Seen Intervening to Weaken Rupee. Investors pouring billions of dollars into India’s rallying stock and bond markets are encountering a surprise: a weak currency. The rupee has slumped 3% since the business-friendly Bharatiya Janata Party took power in May, in sharp contrast to the nation’s stocks, which have risen 9.6% to record highs and are up 25% for the year, ranking as Asia’s best performers.

Thai Central Bank Looks to Stronger Growth. Thailand’s central bank governor Wednesday said he is reassessing what to do with monetary policy now that the country’s armed forces have restored a functioning – and, potentially, high-spending – government. For months, Prasarn Trairatvorakul and his colleagues at the Bank of Thailand have largely held to an accommodative approach to setting interest rates. But now the game is changing.

Philippine Central Bank: Strong GDP Allows More Policy Tweaks. The strong performance of the Philippine economy in the second quarter gives authorities wider scope to tweak monetary policy to guide inflation lower next year, the central bank said Thursday. Central bank Gov. Amando Tetangco said in a statement the 6.4% on year expansion of gross domestic product in the April-June quarter, after a 5.6% increase in the first quarter, underscores the resiliency of the economy and its ability to absorb further adjustments in monetary policy.—Dow Jones Newswires.

GRAPHIC CONTENT
Diversity is turning out to be a key ingredient of a healthy and durable regional economy. Unemployment has fallen sharply across the U.S. over the past year to 6.5% in July, without adjusting for seasonal differences, from 7.7% a year earlier. But labor-market conditions vary greatly across the U.S., hinging largely on how diversified a local economy is. In Detroit, for example, unemployment remains at crisis-like levels more than five years after the recession ended. But the Minneapolis-St. Paul-Bloomington metro area had the nation’s lowest unemployment rate among large metro areas in July at 4.2%. “What distinguishes Minneapolis in general is that it’s extremely well-diversified,” said Fatih Guvenen, a University of Minnesota economics professor. 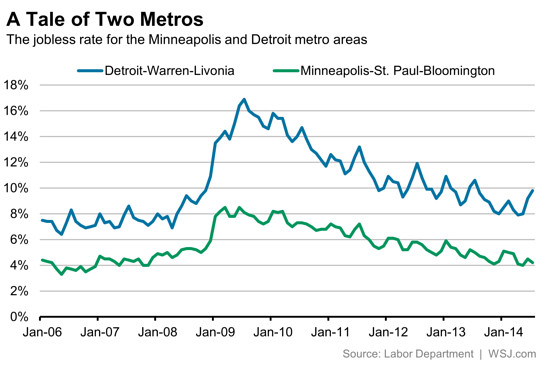 RESEARCH
A Look at Income Inequality, Hour by Hour. By now, anyone following the debate over income inequality in the U.S. has likely seen the rise of income inequality charted over the years or over decades. But how about hour by hour? A new study by the Economic Policy Institute, a left-leaning think tank, breaks down Labor Department data on hourly earnings to show income disparity even at the level of hourly wages. Someone earning $8.38 an hour is in the 10th percentile, meaning they earn more than 10% of workers, but less than 90%. At the top of the distribution, workers at the 90th percentile earn $40 an hour and those at the 95th percentile earn $52.23.

COMMENTARY
Markets might be expecting too much from Draghi, writes Richard Barley in the Heard on the Street column. “Expectations can be powerful things–as long as they don’t get ahead of themselves. European Central Bank President Mario Draghi last week acknowledged that market expectations of future euro-zone inflation had been falling–and in doing so fanned the perception that the ECB could act at its meeting next week.”

If Draghi doesn’t act after all this, there’ll be hell to pay, write Alen Mattich and Michael J. Casey in the Journal. Euro-zone bond yields slide to yet new record lows as expectations grow that the European Central Bank is lining up a massive dose of quantitative easing–perhaps focused on purchases of private sector assets, such as ABS, rather than government bonds. It has put the onus very strongly on ECB President Mario Draghi, who helped create this anticipation with his speech in Jackson Hole last weekend. Some are calling those comments “Whatever it Takes 2,” a rerun of his pledge from two years ago to save the euro, but this time he absolutely has to deliver concrete policy action.

BASIS POINTS
– The latest reading on U.S. consumer confidence, released Tuesday by the Conference Board, shows households are as upbeat about the economy as they were in 2007, as the last expansion was about to end. But that good cheer hasn’t translated to stronger spending.

-The number of unemployed people in France rose 0.8% in July from June, setting yet another record high at a time when President Francois Hollande is struggling to convince the French that he has the right recipe to solve the country’s economic woes.