Charles Plosser’s dissent at the Federal Reserve’s policy meeting earlier this week hinged on the following sentence from the central bank’s statement:

“The Committee continues to anticipate, based on its assessment of these factors, that it likely will be appropriate to maintain the current target range for the federal funds rate for a considerable time after the asset purchase program ends, especially if projected inflation continues to run below the Committee’s 2 percent longer-run goal, and provided that longer-term inflation expectations remain well anchored.”

It is an important sentence, offering the Fed’s most explicit clues on the timing of interest rate increases, and it is likely to become the subject of more debate in the months ahead. So let’s take a closer look at it.

Mr. Plosser, president of the Federal Reserve Bank of Philadelphia, argued that the phrase “considerable time” implies the Fed is on a fixed schedule for tightening. The economy might reach the Fed’s goals of 2% inflation and lower unemployment ahead of schedule. Mr. Plosser argued the language doesn’t reflect the progress the economy has already made toward the Fed’s goals. The jobless rate, at 6.1% in June, was already well below levels that officials anticipated earlier in the year.

A close reading of the sentence shows the Fed has built itself wiggle room. “Considerable time” is dependent on the Fed’s assessment of factors including labor market conditions, inflation and financial market conditions, factors referred to in the previous sentence of the policy statement.  In testimony to Congress last month, Chairwoman Janet Yellen noted that if inflation or unemployment reach the Fed’s goals sooner than expected, it might move sooner than planned, and vice versa.

This analysis is all the more fuzzy because the Fed hasn’t defined what “considerable time” means. The clock starts ticking when the bond buying program ends in October. Ms. Yellen implied during a news conference in March that considerable time means about six months, but she’s backed away from that phrase because she doesn’t want to get locked in to a date.

Keep your eye on the ball. The Fed is effectively saying its plans are data dependent, not calendar dependent. If officials become convinced the economy is doing much better than they expect, their willingness to wait a “considerable time” before moving could change. For Mr. Plosser, the data are already convincing enough. For his colleagues, it will take more proof.

The next important reading — a Labor Department employment report for July – is just an hour away.

Asset Managers May Avoid Fed Oversight. After months of lobbying, large asset managers such as BlackRock Inc. and Fidelity Investments won a battle in their fight against tighter regulation Thursday. A panel of top U.S. financial regulators agreed to revamp their review of asset-management firms to focus on potentially risky products and activities rather than individual firms. The shift by the Financial Stability Oversight Council lessens the likelihood individual asset managers will be labeled “systemically important”—a designation that would draw them in for greater oversight by the Federal Reserve.

“Too Big to Fail” Report Hedges on Big Banks’ Funding Edge. Large U.S. banks may still have an advantage over small banks due to the perception they are “too big to fail,” but that edge appears to have “declined or reversed” since the 2008 financial crisis, according to a new government report released Thursday.

U.S. Wages, Benefits Rise at Fastest Pace in Almost Six Years. The employment-cost index, a broad measure of pay and benefits, rose a seasonally adjusted 0.7% from March through June, the Labor Department said Thursday. Wages and salaries, which make up about 70% of compensation costs, rose 0.6% in the second quarter, while benefits, which include paid leave and insurance policies, rose by 1%.

What to Watch for in Friday’s July Jobs Report. Can hiring keep up its strong pace in the second half of the year? We’ll get our first clue Friday at 8:30 a.m. EDT, when the Labor Department releases its jobs report for July. Economists expect payrolls to rise by 230,000 and the unemployment rate to remain at 6.1%.

New York Fed Report Urges Puerto Rico to Overhaul Policies. The bank weighed in on the financial woes of Puerto Rico Thursday with a report that says it should overhaul its tax policies, its management of utilities and its budget practices to reinvigorate its economy.

BOJ Beat: Hollowing-Out of Car Manufacturing Weighs on Exports With Japanese exports showing little sign of life despite a weaker yen and a rebounding U.S. economy, Bank of Japan officials are growing concerned they have underestimated the impact of the country’s industrial hollowing-out–particularly in the auto industry.

BOJ Kuroda: Economy’s Virtuous Cycle Still in Place, BOJ Ready to Act if Needed. Bank of Japan Gov. Haruhiko Kuroda stuck to his bullish view on the economy and inflation Friday, highlighting his divergence with colleagues who expressed concerns about consumption and exports earlier this week. While Mr. Kuroda conceded that a falloff in demand has been observed in durable goods such as cars following the rise in the sales tax in April, he said the higher rate’s adverse effects are likely to diminish over the summer, supported by solid income and job conditions – Dow Jones Newswires.

Yuan Rising as China Economy Shows Signs of Improvement. China’s currency is set for a third monthly rally against the dollar, rebounding from an unprecedented tumble earlier in the year, with traders saying it is primed for further gains amid signs the world’s second-largest economy is strengthening.

China Manufacturing Data Point to Rebound in Growth. Two gauges of manufacturing activity in China picked up in July, adding to signs that economic growth is recovering as the government’s stimulus program takes effect. Both the government’s purchasing managers’ index and a competing private-sector equivalent bounced back in July, offering fresh signs of recovery after policy makers moved to speed up spending on railways, cut taxes on businesses and make more credit available to small firms.  Economists React.

China Average Housing Prices Fall for Third Straight Month. The decline has picked up the pace, indicating that the prospects for the housing sector remain grim. Average new home prices fell 0.8% in July from June, data provider China Real Estate Index System said Thursday. Out of the 100 cities surveyed, 76 showed a decline in home prices, up from 71 in June.

Hong Kong Ramps Up Intervention to Curb Local Currency. Hong Kong’s de facto central bank injected $65.1 billion Hong Kong dollars (US$8.4 billion) into the foreign-exchange market in July to defend the local currency peg to the U.S. dollar as foreign funds continued to pour into the city to feed a hunger for Chinese assets.

Poland’s Economic Slowdown is Worse Than Expected Says Rate Setter. Poland’s economic recovery is losing steam and could be slower this year than previously thought, Polish central banker Jerzy Osiatynski said Thursday, highlighting chances for a cut in interest rates. In early July the central bank wound back its previously hawkish rhetoric and changed its bias to neutral, signaling that it was ready to reduce borrowing costs if the economy slows. The key rate is at 2.5%, while consumer price inflation is near zero. 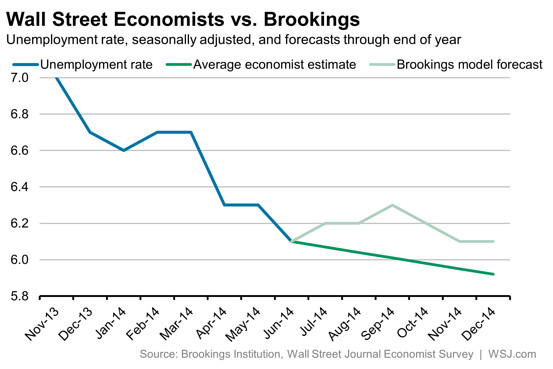 World Income Inequality Even Worse Than Within U.S. The income gap between rich and poor nations is more severe than the disparities between the top and bottom of the U.S. income ladder, according to new research from the St. Louis Fed. The median income for the poorest 10% of Americans is still more than seven times greater than the median income of the population in the poorest 19 developing nations, they say.

BOE Paper Probes Pension Funds, Insurers. A Bank of England paper released Thursday asks whether the pro-cyclical tendencies of investors and banks—to behave in ways that fuel bubbles on the way up and deepen slumps on the way down–are also evident among asset owners such as insurers and pension funds, and whether this behavior might have undesirable consequences for financial stability and the wider economy. The paper concludes there is indeed some evidence of insurers behaving pro-cyclically, but the evidence on pension funds was less clear-cut.

Bloomberg View columnist Mark Gilbert writes that “Europe won’t Admit it’s Spiraling Into Deflation.” He says, “Back in March, European Central Bank Governing Council member Jens Weidmann said that the ‘deceleration of prices’ seen in the euro region was a temporary phenomenon caused by a drop in energy and food prices. What sounded unlikely then now looks myopic, misinterpreted or disingenuous, depending on how charitable you’re feeling.”

The Fed’s reserve is cracking, writes Justin Lahart in the Journal’s Heard on the Street column. “The Federal Reserve’s tone has gotten a bit more hawkish. Judging from what the economy is doing, there may be more to come.  As long as wage growth remains low, though, most members of the Fed’s rate-setting committee will probably view a move above 2% inflation as transitory.”

-The number of U.S. workers filing new claims for unemployment benefits rose last week after sinking to a 14-year low earlier in the month

-Euro-zone manufacturers cut jobs in July for the first time in seven months, underlying the fragility of the currency area’s economic recovery.