To hear Wall Street analysts scour every minor indicator of wage growth for hints of looming price rises, it might seem a period of elevated U.S. inflation is inevitably around the corner. Never mind that the nation’s inflation rate has undershot the Federal Reserve’s official 2% target for much of the economic recovery.

Has the Fed’s message been slightly more hawkish lately? Sure. Officials have acknowledged a pickup in inflation and have been surprised by recent strength of the job market. Dallas Fed President Richard Fisher says he didn’t dissent because he felt other Federal Open Market Committee members were moving in his direction.

However, many around the table are still smarting from a recent pattern of early-year optimism that then dissipates around spring or summer as a harsher reality sets in. Already, the Fed has sharply revised its forecasts for economic growth this year, down to a 2.1%-2.3% ‘central tendency’ range in June from a March projection of 2.8%-3.0%.

Let’s not forget that wage growth is a desired outcome of the Fed’s policies, not a negative side-effect. Wall Street economists tend to focus their analysis on the perspective of business executives, for whom costlier labor can be a short-term drag on profits. But Fed policy makers should and do take a broader view. They want to see a return to prosperity for the millions of Americans whose incomes have been stagnant for years, in some cases decades.

Might the central bank, which has held official borrowing costs at effectively zero since Dec. 2008, consider moving up the date of interest rate ‘liftoff’ from mid-2015, as markets currently predict, to earlier in the year? It could, but only if indicators on all fronts – employment, inflation and growth – continue to outpace expectations. And that, recent history suggests, is a tall order.

Lockhart Doesn’t See Fed Rate Hike Until Second Half of 2015. Although the economy is clearly growing at a respectable rate, Federal Reserve Bank of Atlanta President Dennis Lockhart said Wednesday it is premature to start planning an early exit from the central bank’s ultraeasy policy stance. “I’m not ruling out” the idea the Fed may need to raise short-term interest rates earlier than many now expect, Mr. Lockhart said in an interview with The Wall Street Journal. He still expects the Fed to wait until the second half of next year before starting to raise interest rates, saying he is “looking for further validation that we are on a track that is going to make the path to our mandate objectives pretty irreversible.”

Fed Looms as Factor in Treasury Borrowing Outlook. How much debt the U.S. government needs to issue to the market beyond 2015 depends in part on the Federal Reserve, according to a report released by the Treasury Department on Wednesday. The U.S. central bank is now, as part of its massive bond buying program, known as QE3, reinvesting principal payments from its $4 trillion balance sheet into new issuance of Treasury debt.

Bank of America Near $16 Billion to $17 Billion Settlement. Bank of America and the Justice Department are close to a deal in which the bank will pay between $16 billion and $17 billion to resolve allegations of mortgage-related misconduct in the run-up to the financial crisis, according to people familiar with the matter. If finalized, the agreement would set a record for fines and damages in a civil settlement between the U.S. government and a company.

BOE Leaves Rate Unchanged As Debate Intensifies.  The Bank of England left its benchmark interest rate on hold Thursday, but the debate over when to raise it is heating up.  The U.K.’s strengthening economy means the BOE is on course to be the first of the world’s major central banks to call time on years of crisis-era monetary policy and lift interest rates from historic lows.

Poll Highlights BOE Rate Risk. One of the Bank of England’s chief concerns as it inches closer to raising interest rates is that Britons will cut back spending when faced with higher borrowing costs, potentially slowing the economy’s recovery. A poll published Wednesday by pollster ComRes and broadcaster ITV may therefore ring alarm bells. It found a sizable chunk of Britons are already cutting back spending in anticipation of higher rates. ComRes surveyed more than 2,000 Britons between Aug. 1 and Aug. 3. The company found 49% of mortgage holders are currently cutting back spending in expectation of making larger loan repayments in the coming months. Just over a third of all adults surveyed, including those without mortgages, said they are tightening their belts now, even though the BOE is expected to keep its benchmark rate on hold until late 2014 or early next year.

Romania Central Bank: Ready to Narrow Gap Between Monetary Policy, Interbank Rates – Mediafax. The Romanian central bank is ready to further narrow the gap between interbank rates and the monetary policy rate so that banks feel comfortable enough to resume lending, even if the move might lead to a less stable exchange rate for the leu, the bank’s chief Mugur Isarescu said Wednesday, news agency Mediafax reports.–Dow Jones Newswires

The escalating U.S. sanctions battle against Russia appears to be taking a toll on trade with the country, with June data showing both sides of the ledger falling as Washington ratcheted up the financial pressure on Moscow. U.S. Commerce Department data released Wednesday underscored that sanctions are a double-edged sword: U.S. exports took the hardest hit, plummeting 34% on the month to the lowest level since January last year. Imports from Russian firms, meanwhile, fell nearly 10%, the third consecutive month of declines in U.S. purchases. That asymmetric fall between buying and selling pushed the trade gap with Russia up 25% to $1.13 billion. 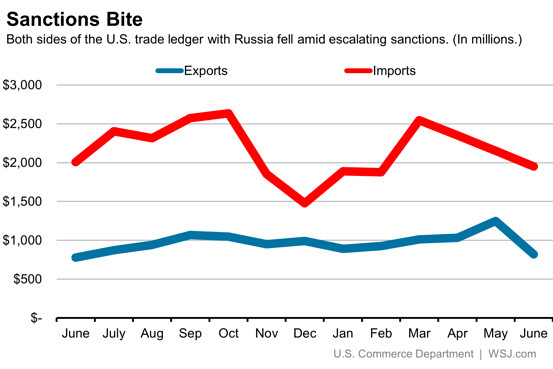 BOE Policy Becoming More Effective. Examining the impact of unexpected changes in monetary policy over recent decades, three economists find that the impact on inflation has grown over time, and particularly after the 1992 switch to inflation targeting. They conclude that the BOE has more successfully anchored inflation expectations, or convinced Britons that the annual rate of inflation will be around 2% over the medium term. “These tangible benefits suggest that policy should respond very strongly if there are any signs that the credibility of the inflation target is starting to erode,” the economists wrote.

Italy’s economic plight might be less obvious than Greece’s epic bust of the past few years, but it’s no less tragic. And potentially more dangerous, writes Alen Mattich in the Journal. Italy slipped back into recession during the second quarter–the country’s economy has contracted for 18 of the 30 quarters since the start of 2007. In inflation-adjusted terms, Italy’s economy is no bigger now than it was in 2000. By contrast, at the end of the first quarter the euro zone’s overall economy was 13% bigger than it was at the turn of the millennium, the European Union’s was 17% larger and even the Greek economy (probably) managed to post growth over that period.

– U.S. home prices have slowed down from their breakneck growth pace of the past year, according to CoreLogic’s price index.

-Imports into the U.S. posted the sharpest decline in a year in June, helping to narrow the trade deficit but possibly signaling an easing of domestic consumer demand. The U.S trade deficit shrank 7% to a seasonally adjusted $41.54 billion in June from May, the Commerce Department said Wednesday. Imports fell 1.2% to $237.40 billion, the lowest level since February. Meanwhile, exports increased 0.1% to $195.86 billion, the highest level on record.

– The value of Swiss foreign-currency reserves edged up to 453.4 billion Swiss francs ($499.4 billion) in July from CHF449.6 billion in June, central bank data showed Thursday. The Swiss National Bank’s reserves have held near current levels since mid-2012, after it was forced to buy large amounts of euros to prevent the franc from gaining versus the common currency, used by Switzerland’s key export markets – Dow Jones Newswires.

– Greece’s parliament Wednesday approved legislation containing changes needed for the country to receive an installment of 1 billion euros ($1.3 billion) from a bailout package by the IMF and its European peers. The omnibus bill was approved by a reduced quorum due to the summer session of Parliament, which will now break for a summer holiday before reconvening around Aug. 26.

SIGN UP: Grand Central, straight to your inbox http://on.wsj.com/grandcentralsignup.