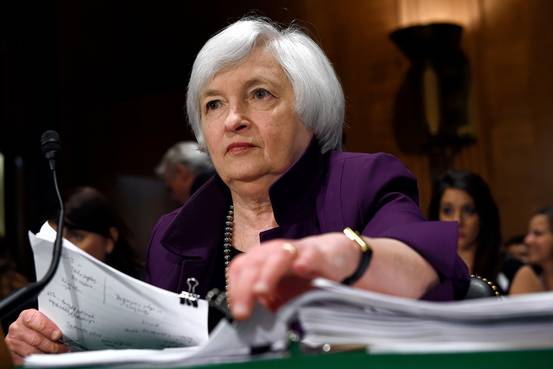 The bad news about U.S. inflation is it has run below the Federal Reserve’s 2% objective for 38 straight months. The good news is that it shows signs of having stabilized in the first half of 2015.

The Commerce Department’s Monday report on U.S. personal consumption expenditures (PCE) included details on monthly inflation trends, which are tracked closely by the Federal Reserve. The PCE price index excluding the volatile food and energy sectors – a measure of “core” inflation the Fed uses to track underlying consumer price trends – ran at 1.3% from a year earlier for each of the first six months of the year. Nearer-term PCE price index measures show signs of lifting. In the second quarter, the PCE price index excluding food and energy increased at a 1.8% annual rate compared to the first quarter, not far from the 2% goal.

Stability counts at the Fed. In a speech in March, Fed Chairwoman Janet Yellen said she wouldn’t feel comfortable raising short-term interest rates if core consumer-price inflation were to weaken. She can cross that problem off her list of worries for now. However with the dollar strengthening recently – and possibly putting renewed downward pressure on import prices — she might want to use a pencil. 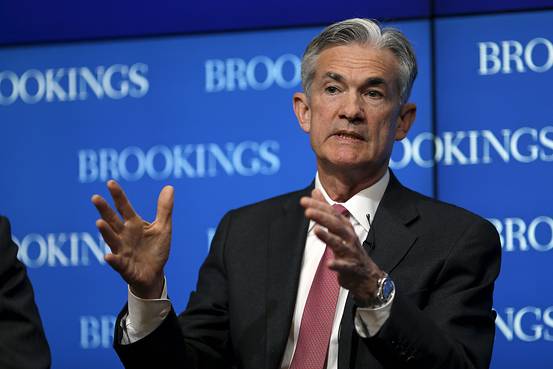 Powell: U.S. Should Consider Changing Treasury Market Structure. Federal Reserve governor Jerome Powell said he wasn’t ready to endorse any specific change. But he questioned the benefits of a structure that caters to superfast, electronic trading, which has accounted for a growing share of Treasury market volume in recent years.

Inflation Misses Fed’s 2% Target Again.  June was yet another month of weakness in consumer-price growth, the Commerce Department said Monday. The price index for personal-consumption expenditures, the Fed’s preferred inflation measure, rose 0.2% in June from a month earlier and up just 0.3% from a year earlier.

Former Trader Sentenced to 14 Years for Libor Rigging. A jury convicted Tom Hayes, a former trader at UBS Group AG and Citigroup Inc., with fraudulently trying to rig the London interbank offered rate, or Libor, the first criminal conviction of an individual for manipulating the widely used benchmark.

BOJ Deputy Governor Doesn’t See Yen Risk for Japan’s Economy From Fed Rate Increase. Bank of Japan Deputy Gov. Kikuo Iwata said Tuesday he didn’t see a particular risk for the Japanese economy from a possible increase in U.S. interest rates, adding that such a move wouldn’t necessarily lead to further gains in the dollar against the yen. “A widening interest rate differential between the U.S. and Japan is normally considered a factor for weakening the yen,” Mr. Iwata at a parliamentary session. “But if the market has factored in the move, the yen won’t fall,” he added–Dow Jones Newswires. 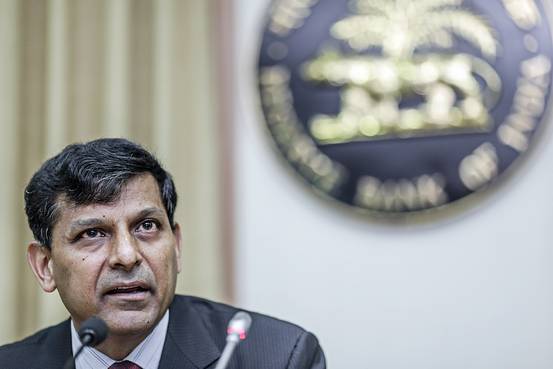 India’s Central Bank Leaves Main Interest Rate Unchanged. The Reserve Bank of India left its main interest rate unchanged Tuesday, as contradictory data failed to provide a clear picture of the health of Asia’s third-largest economy. RBI Governor Raghuram Rajan said he is still waiting for banks to pass on to customers the three interest-rate cuts he has made since the start of the year, and noted that the inflation forecast for India has somewhat worsened.

5 Reasons Why the RBI’s Raghuram Rajan Isn’t Ready to Lower the Lending Rate Yet.

Australia Holds Rates Amid Hopeful Signs. Australia’s central bank left interest rates unchanged on Tuesday, as expected, while leaving the door open for a cut later in the year should the economy falter. The Reserve Bank of Australia, or RBA, kept the cash-rate target at a record-low 2.0%, where it has been since May. It has cut rates twice already this year in response to sharp falls in commodity prices, economic weakness and benign inflation.

Global Inflation Remains Stubbornly Low. Global inflation rates were unchanged in June, and well below desired levels in developed nations, even as some central banks prepare to raise their key interest rates for the first time since the global financial crisis. 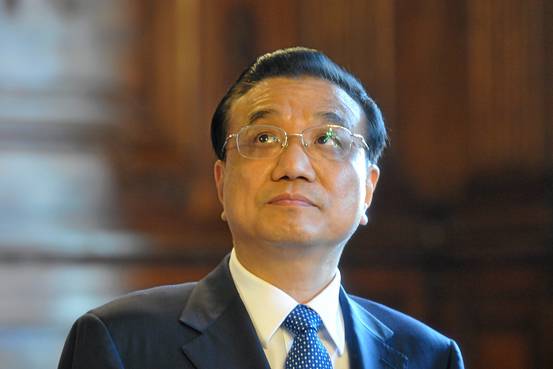 China’s Response to Stock Rout Exposes Regulatory Disarray. As China’s summer stock slide deepened, threatening a key plank of Beijing’s plan to overhaul the world’s No. 2 economy, the country’s premier pounded the table and demanded that regulators get their act together. Meeting with senior financial and economic officials in Beijing on July 4, Li Keqiang criticized them for failing to anticipate the severe market plunge, officials with knowledge of the gathering said. Then he urged them to act in a coordinated way to stanch the bleeding, these officials said.

China Proposes to Limit Online Payments. The draft rules by China’s central bank place curbs on online payment services. The rules could hamper the growth of payment services like those operated by e-commerce giant Alibaba Group Holding Ltd.’s financial affiliate, and social-networking company Tencent Holdings Ltd. Chinese regulators have said the proposed rules are the latest in a broad effort aimed at building up much-needed safeguards against fraud and money laundering.

Foreign Ownership of Spanish Government Debt Rises. As of June 2015, foreign investors held EUR356 billion ($390 billion) of Spanish government bonds, 49.2% of the total outstanding, Bank of Spain data show. The rebound is in part a testament to the Spanish government’s reform efforts, and in part down to intervention by the European Central Bank to curb the sovereign debt crisis.

Eurozone PMI Survey Shows Collapse in Greek Manufacturing Output. The headline Purchasing Managers Index plummeted to 30.2, the lowest level recorded in the 16-year history of the series. The survey attests to a degree of paralysis not often seen in a developed economy, as businesses lost their access to credit, raw materials and other supplies. 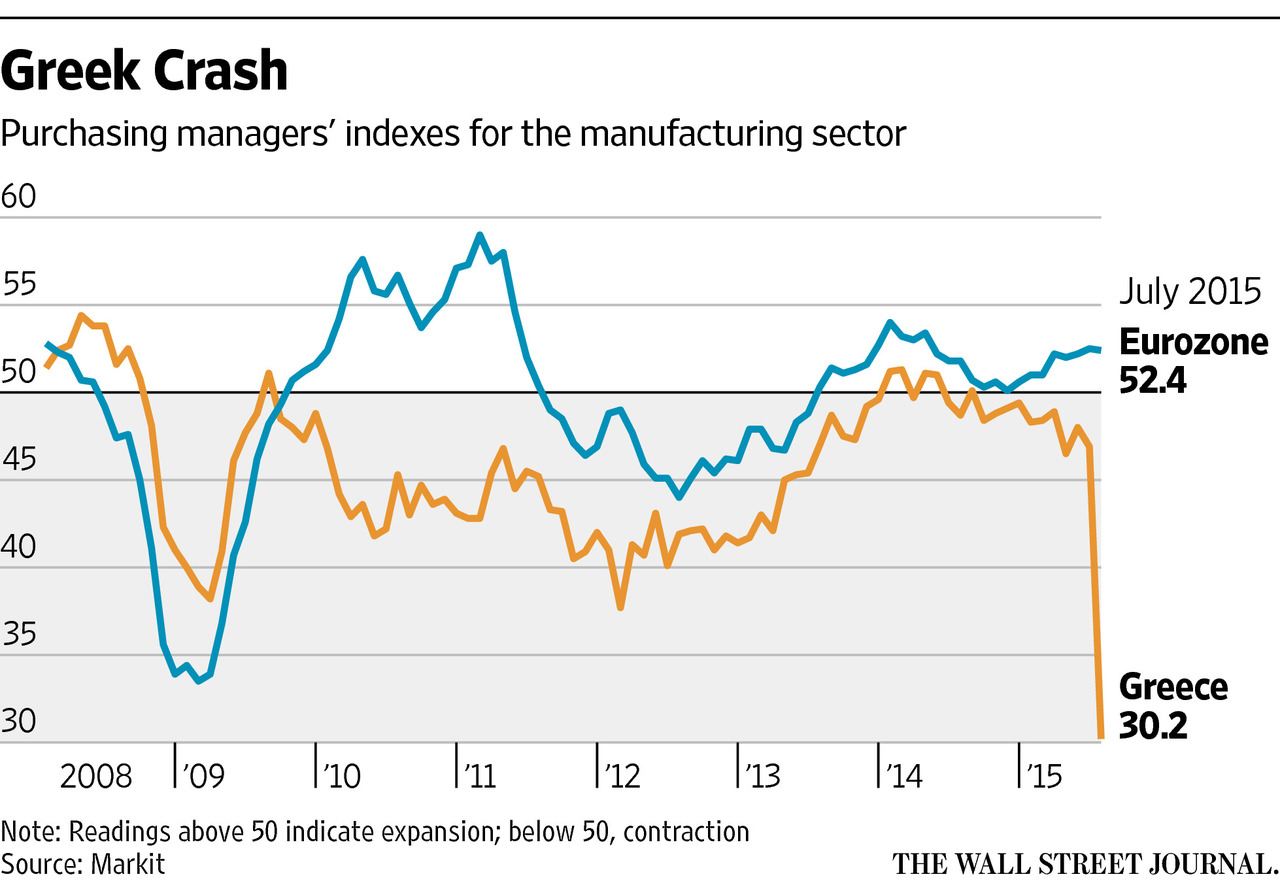 Interest Rates and House Prices. The San Francisco Fed’s Òscar Jordà, Moritz Schularick, and Alan M. Taylor question the wisdom of using central bank monetary policy to temper housing bubbles. “Slowing down a boom in house prices is likely to require a considerable increase in interest rates, probably by an amount that would be widely at odds with the dual mandate of full employment and price stability,” they write. “Moreover, the Fed would need a crystal ball to foretell house price booms. In restraining asset prices, while the power of interest rate policy is uncontestable, its wisdom is debatable.”

Jump-Starting the Euro Area Recovery. Outgoing International Monetary Fund chief economist Olivier Blanchard joins the Fed’s Christopher J. Erceg and the Swedish central bank’s Jesper Lindé call for a fiscal expansion in the Euro area. “Fiscal policy seems a potent tool to improve welfare throughout the euro area, at least to the extent that welfare can be proxied by inflation and output gaps.”

The Fed plans additional tests for one of the tools it intends to eventually use to raise short-term interest rates, the U.S. central bank said Monday.

The ISM’s manufacturing purchasing managers index fell to 52.7 in July from 53.5 in June. U.S. factory activity has been lackluster in recent months.