HILSENRATH’S TAKE: SIZING UP THE FED’S SUMMARY OF ECONOMIC PROJECTIONS

Economists surveyed by The Wall Street Journal expect a bit more inflation and a slightly lower unemployment rate this year than they expected three months ago.

They also see the Federal Reserve’s benchmark interest rate, the federal funds rate, a touch higher by the end of 2016 than they projected in March.

Maybe that provides some clues as to how Federal Reserve officials will revise their own economic and interest rate forecasts when they gather for their next policy meeting June 17-18 and update their projections. The Fed last updated its forecasts in March.

The Wall Street Journal surveyed 48 private economists between Friday and Tuesday. Check out WSJ.com later today for a complete rundown on the results of the monthly survey. For now, here’s a taste of what emerges, comparing analysts’ March forecasts with their most recent:

Taken altogether, these are very small, undramatic changes. The drift is towards an economy in which spare capacity is very slightly less than projected three months ago.

That suggests the Fed’s interest rate expectations should be stable or move up a smidgeon, which is exactly what the private analyst forecasts did.

The midpoint of projections for the fed funds rate among the private economists surveyed by the Wall Street Journal was 1% in December 2015 and 2.5% in December 2016. That compares to 1% and 2.25% respectively when analysts were surveyed in March. The median among Fed officials in March was 1% in the fourth quarter of 2015 and 2.25% in the fourth quarter of 2016.

There are wildcards in the Fed’s interest rate forecasts. Jeremy Stein has left the Fed board and Stanley Fischer joined. Lael Brainard could join before the next policy meeting. Sandra Pianalto has stepped down as Cleveland Fed president and Loretta Mester has taken the job. The new faces could scramble the projection picture a little.

Some officials are rethinking how high they think rates need to go in the long-run to prevent inflation. Some believe diminished long-run growth prospects reduce the need to raise rates significantly. That could hold down these rate projections. But if investors are expecting dramatic reductions in the Fed’s rate forecasts, the WSJ survey suggests they could be disappointed.

Lew: China Must Move Quicker to Market-Determined Yuan Rate. China must move to a market-determined exchange rate for the yuan sooner rather than later, U.S. Treasury Secretary Jacob Lew said Wednesday. “They know that the things we’re pressing them on is consistent with their own long-term interest,” Mr. Lew said. “I’m optimistic about making progress.”

Brat to Bernanke: Don’t Underestimate the Value of Protestants. The Federal Reserve’s Ben Bernanke got it wrong because he forgot to account for God, or at least for the Protestant way of worshiping him. That’s the basic argument of David Brat, the economist and Virginia Republican who toppled House Majority Leader Eric Cantor (R., Va.) in a primary election on Tuesday.

Hansson: ECB ‘Needs to Be Ready’ for Asset Purchases. Interest rate cuts announced by the European Central Bank last week are substantial, but the bank should still lay the groundwork for large-scale asset purchases, a member of the ECB’s Governing Council told The Wall Street Journal in an interview. “I think it is important that when we think of additional measures, we advance continuous technical preparations [for quantitative easing],” said Ardo Hansson, who also heads the central bank of Estonia.

Euro-Zone Deflation Risk Remote, Says ECB. The euro zone isn’t on the brink of deflation, despite significant declines in inflation, the European Central Bank said Thursday. “The current situation does not suggest that an outright deflationary episode is imminent,” the ECB said in its monthly report.

New Euro Play: Borrow Cheaply, Invest Elsewhere. The euro has weakened only a touch against the dollar since the ECB cut interest rates. But this masks a larger decline against currencies of countries around the world that offer higher interest rates.

Broadbent: BOE Not in the Business of Pricking Bubbles. The Bank of England’s job is to maintain financial stability, not to prick bubbles in markets for real estate and other assets, one of the U.K. central bank’s top officials said Wednesday. Ben Broadbent, a serving rate-setter, takes over as the BOE’s deputy governor for monetary policy July 1.

New Zealand’s Central Bank Raises Official Cash Rate to 3.25%. New Zealand on Thursday raised interest rates for the third time this year and signaled more rises to come as the central bank looks to stave off inflationary pressures. New Zealand Central Bank Surprises Market with Guidance Thursday’s move was well-flagged, but the RBNZ’s commitment to keep the tightening cycle going despite a slump in commodity prices, a general election on Sept. 20 and the still-high New Zealand dollar took markets by surprise.

Serbia Central Bank Cuts Benchmark Rate. Serbia’s central bank Thursday cut its benchmark interest rate for the second straight month, to 8.5% from 9.0%. The executive board said recent heavy flooding will weaken activity in energy and agriculture, and that “it may reasonably be expected that the GDP will stagnate this year.” However, the board doesn’t expect the flooding to result in a rise in inflationary pressures.

Bank of Korea Holds Policy Rate Steady. South Korea’s central bank Thursday kept its benchmark interest rate steady at 2.5%. There are expectations of a rate hike in coming months as the economy improves. Seven of 14 economists in a poll conducted by The Wall Street Journal expect the bank to increase the rate as early as the third quarter while five expect it to do nothing this year but make an increase in the first half of next year. Two predict a cut in the third quarter.

A harsh winter in the U.S. along with the Ukraine conflict have chilled the outlook for global economic growth this year, but highly developed economies will lead a rebound later in the year, the World Bank projected this week. 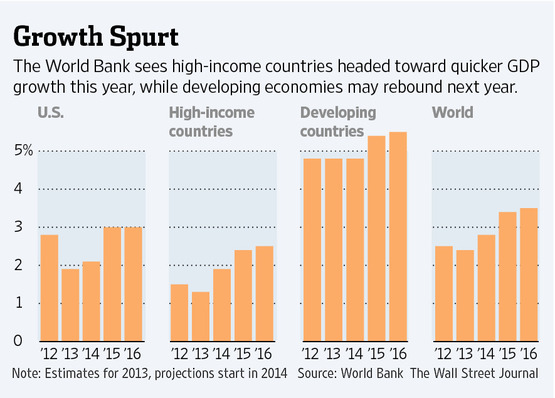 -U.S. Senate likely will vote today to confirm Lael Brainard for a seat on the Fed’s Board of Governors, Jerome Powell for a new term on the board and Stanley Fischer as the Fed’s vice chairman

Recession Did Lasting Harm to Global Growth Potential. Aftershocks from the deepest recession in generations continue to inflict lasting damage to the world economy’s potential, curbing employment prospects for millions, a new paper finds. Laurence Ball, a John Hopkins University professor and former Federal Reserve visiting scholar, suggests some of the scars from the Great Recession may be more permanent, or at least less easily reversed, than previously thought. “Recent recessions have had dire effects on economies’ productive capacity,” Mr. Ball writes in the paper, released by the National Bureau of Economic Research.

Orphanides Points the Finger for Euro Woes at Politicians, Mainly German. Athanasios Orphanides has a theory on what went wrong in Europe: The governance of the euro-zone was incompatible with prudent management of a major crisis. Some big countries – notably Germany – exploited the flaws in the system to its advantage at the expense of others. The 2009 recession was triggered by the U.S., but the 2011 recession was made in Europe and was avoidable. “Key decision makers exhibited neither political leadership nor political courage,” he says in a lecture turned into a Massachusetts Institute of Technology working paper.

Bank of England policymakers “are being pulled in two directions,” writes Alen Mattich in the Journal. “The evidence increasingly suggests that the economy’s excess capacity – how much of the economy’s potential isn’t being used – is rapidly draining away. Yet there are few, if any, signs of inflationary pressure.”

Japanese Prime Minister Shinzo Abe is “the most effective national leader in the world right now,” writes Noah Smith in a Bloomberg View column. “Backed by economic adviser Koichi Hamada and Bank of Japan Governor Haruhiko Kuroda, Abe first implemented the biggest monetarist push in world history. He went the opposite direction of Europe, and — unlike the U.S. — he gave every indication that the shift toward monetarism was permanent. The result: Japan has escaped deflation. The stock market is up, growth is way up and even wages are finally starting to rise.”

With a number of measures linked to the Taylor rule suggesting that the Peoples Bank of China’s monetary Policy is too tight, Guonan Ma of the Brussels-based Bruegel think tank argues the central bank should both cut interest rates and lower reserve requirements. “By acting swiftly and decisively now, the PBC can be in a stronger position to tighten again when the cycle eventually turns,” he writes.

-Industrial production across the 18 countries that share the euro rose in April, and at the fastest pace since November, an indication that economic growth may have picked up in the second quarter after a weak start to 2014.

-The Organization for Economic Cooperation and Development says the unemployment rate for its 34 members — mostly countries with developed economies — fell to 7.4% in April from 7.5% in the first three months of the year.

-Relative to their long-run relationship with rents and with incomes, home prices in Canada, New Zealand, Norway, Belgium, Australia, France and the United Kingdom are well above average, the International Monetary Fund says.

-More than one in five homes in China’s urban areas is vacant, according to a nationwide survey by researchers from China’s Southwestern University of Finance and Economics.

-Today in Central-Banking History: On this date in 1860, the State Bank of the Russian Empire was founded by order of Czar Alexander II. The early central bank lasted until the 1917 revolution.