Federal Reserve officials begin two days of policy meetings Tuesday, and a debate about when to start raising short-term interest rates is heating up.

Hawks on the policy committee will point to a declining jobless rate as reason to consider raising short-term interest rates in the months ahead to prevent the economy from overheating. They’ll also note that inflation has moved off its low levels near 1% from earlier this year, toward the Fed’s 2% target.

Doves on the policy committee want to be patient before making credit more costly. They’re unsure the economy has the underlying vigor to sustain tighter credit conditions, and thus want to put off rate hike talk until well into next year.

The doves have inflation expectations on their side right now.

Surveys of households and bond market measures suggest individuals and investors aren’t worried about inflation, which gives the Fed leeway to be patient. Households surveyed by the University of Michigan see inflation of 3.1% in the year ahead. That’s above the Fed’s official 2% objective, but in line with where they’ve seen inflation over the past decade. Bonds markets suggest expected inflation after five years is about 2.45%. That estimate is based on the behavior of Treasury Inflation Protected Securities made available on the Fed’s website and is also in line with longer-term averages.

Fed officials place a great deal of weight on inflation expectations, which can become a self-fulfilling prophesy. With the markets and households not sounding the inflation alarm, the Fed’s doves will say, “Let’s just wait and see how things play out,” and they seem sure to win out, this week at least.

New Bank of England Deputy Is a Potential Guide on Interest Rates. Investors trying to pin down exactly when the Bank of England is going to raise interest rates in the U.K. should keep an eye on Ben Broadbent, Gov. Mark Carney’s newest deputy.

Mr. Broadbent, 49, succeeded Charles Bean as the BOE’s deputy governor for monetary policy July 1. His elevation followed three years on the rate-setting Monetary Policy Committee as one of the panel’s four “externals,” economic experts drawn from outside the central bank’s ranks, where he earned a reputation as an influential and insightful thinker and speaker.

BOE’s Broadbent Says Global Growth Would Aid U.K. A pickup in the global economy is needed if the U.K. is to enjoy a durable recovery, one of the Bank of England‘s top officials said Tuesday. Ben Broadbent, deputy governor for monetary policy, said in a speech in London that the rapid pace of expansion in the U.K. economy is likely to slow in the coming years because of weak global growth, particularly in the neighboring euro zone.

IMF Warns U.K. on Interest Rates. The Bank of England may need to lift interest rates at a faster pace than expected if inflation in the U.K. takes off or new regulations prove ineffective at reining in a booming housing market, the International Monetary Fund said Monday.

IMF Says BOE May Need to Drain Reserves as it Lifts Rates. Officials at the Federal Reserve have been experimenting with how best to control interest rates in a post-crisis financial system flush with excess cash. The IMF thinks the BOE may need to think about doing something similar.

Exports Likely a Hot Topic at Coming BOJ Meeting. Bank of Japan officials are becoming less confident in their outlook on exports after having erred on the side of optimism for more than a year, setting the stage for fresh debate at their policy meeting next week.

BOJ Board Member Ishida Voices Concern About Consumption, Exports. A member of the Bank of Japan’s policy board expressed concerns Tuesday about the nation’s economy amid a lack of clear signs that consumption is recovering following a rise in the sales tax in April, and persistent weakness in exports. Nearly four months after the sales tax went up, many companies view the falloff in demand as within expectations amid improving consumer sentiment. But BOJ board member Koji Ishida said a recovery in demand for big-ticket items such as houses and cars may take more time. Meanwhile, a decrease in real wages adjusted for inflation may gradually weigh on overall consumption, he said.

China’s Banks Pose World’s Largest Systemic Risk . The cost of propping up China’s banks in the event of a financial crisis have nearly quadrupled in the past three years to $526.2 billion, the largest of any banking system, according to the latest analysis by the Volatility Laboratory at New York University’s Stern School of Business .

Bank of Korea Minutes Show Dovish Shift. The Bank of Korea’s dovish shift has been officially put on record. On Tuesday, minutes of the central bank’s July 10 policy board meeting revealed Chung Hae-bang as the first board member in over a year to oppose a decision to keep rates on hold.

Bank of Israel Trims Benchmark Interest Rate. The Bank of Israel on Monday cut its benchmark interest rate for August by 25 basis points to 0.50%, citing slowing inflation in June as well as weakness in exports and the world economy.

Lloyds Banking Group Fined Over Libor. U.S. and U.K. authorities on Monday imposed roughly $370 million of fines on Lloyds Banking Group for attempting to rig a series of benchmark interest rates, including one that determined the fees the bank paid to access emergency taxpayer funding at the height of the financial crisis.

Swiss Property Market Starts to Cool. Signs are emerging that the recent price boom in Switzerland’s property market is starting to ease as the government, the central bank and banks toughen up their lending rules.

It’s been nearly seven years since the market for so-called private-label mortgage bonds, or those that aren’t backed by government-related entities, dried up. For years, government policy makers and financiers have speculated over when those markets might meaningfully revive. But given the weak issuance of such private mortgage-backed securities since the financial crisis deepened, there’s a good case to be made that that market is dead, said Joseph Tracy, a senior adviser at the New York Federal Reserve Bank, at a conference sponsored by Zillow last week in Washington. 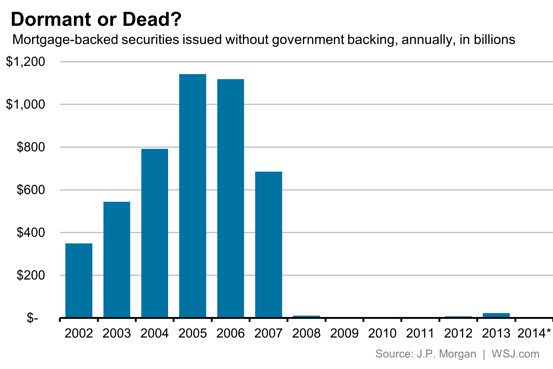 Spurious Correlation Between Public Debt and the Money Supply. A chart of the M2 money stock and total federal debt appears to show a pattern that does not exist, notes the St. Louis Fed’s FRED Blog. “Relationships between macroeconomic time series are not usually straightforward enough to establish with a simple graph. The problem is that almost all time series tend to grow in the long term as an economy grows.”

“Don’t fight the Fed” is an old rule on Wall Street, writes Barry Ritholtz in a Bloomberg View column. “When the Federal Reserve is cutting rates, you want to be long equities, and when it is tightening, get out of the way. … But the knee-jerk response to an over-simplified rule of thumb might be wrong. When we look at the actual data — what happens to stocks when rates rise — we find a very different set of results than this heuristic suggests.”

-South African officials said on Monday they would use a summit between U.S. President Barack Obama and African leaders next week to lobby for renewal of a trade pact they called an important instrument of U.S. influence on a continent where China and other powers are vying to invest.

-The number of contracts signed to buy previously owned U.S. homes slipped in June, a sign the housing recovery remains choppy despite a retreat in interest rates.

-Speculators are ramping up their bearish bets on the euro. But while the recent weakening of the common currency is a welcome relief for the euro-zone economy, some analysts say the move is looking stretched.