Federal Reserve officials estimate that the unemployment rate in the long-run rate will settle in between 5.2% and 5.5%. The jobless rate rose to 6.2% in July from 6.1% in June, according to the latest Labor Department figures. That means it is still outside of the Federal Reserve’s comfort zone. Officials thus feel comfortable keeping short-term interest rates near zero to boost growth and hiring.

However, if the pattern of the past three years holds, the jobless rate will keep falling and the Fed could face challenging choices in the months ahead.

The jobless rate has been falling on average by 0.9 percentage points every 12 months. At this pace it will hit 5.8% by December, 5.4% by April 2015 and 5.2% by June 2015. It is, in short, closing in on the landing zone known among economists as the natural rate of unemployment, a rate where inflation pressures are benign and the job market healthy.

In normal times, the central bank would want its interest rate to be neutral when the unemployment is at its natural rate. Right now the interest rate, near zero, is meant to be highly stimulative to borrowing, growth and financial conditions. Fed officials estimate a neutral interest rate in a normal economy is around 3.75%.

This, in a nutshell, is Janet Yellen’s challenge for the next 12 months. The Fed is far away from a neutral interest rate and shows no inclination to move soon, but the economy is closing in on a natural unemployment rate.

Policy hawks don’t want to remain so far from a neutral interest rate when the job market is getting closer to normal. Ms. Yellen believes she can be patient. The next 12 months will test her nerves and judgment.

Bank of Portugal Unveils Plan to Rescue Banco Espírito Santo. Portugal’s central bank late Sunday unveiled a plan to rescue the country’s second-largest lender by breaking up the bank and pumping in billions of euros of state money. The fate of Banco Espírito Santo SA is surprising given that only a few weeks ago the Bank of Portugal said the lender had enough capital to withstand shocks coming from its parent, a Luxembourg-based conglomerate that ran into trouble after an auditor found accounting irregularities.

Hiring Settles Into Steady Gains. U.S. businesses added jobs at a sturdy pace last month, extending the most robust stretch of hiring since before the recession. The question now: Is this the beginning of a breakout in hiring that will lift wage growth and finally bring unemployment down to levels consistent with a healthy economy?

WSJ’s Hilsenrath: Fed Can Remain Patient on Rate-Hike Debate After Data. Friday’s employment and income reports pointed to steady U.S. job growth and firming but low inflation–trends that are likely to keep the Federal Reserve on course to end its bond-purchase program in October and remain patient before raising short-term interest rates.

Consumer Rebound Chugs Ahead. Consumer spending advanced modestly in June, continuing a rebound after a weak first quarter, while a key measure of inflation eased slightly. Personal spending, which measures what Americans pay for everything from groceries to electricity, rose a seasonally adjusted 0.4% in June, the Commerce Department said Friday. That followed a 0.3% increase in May.

Inflation Still Below Fed’s 2% Target. Consumer prices grew tepidly in June, a sign inflation pressures remain below the Federal Reserve’s target. The price index for personal consumption expenditures—the Fed’s preferred measure of inflation—climbed 1.6% in June from a year earlier, the Commerce Department said Friday. That was down slightly from May’s year-over-year gain of 1.7%.

Five Things to Watch on the U.S. Economic Calendar. This week’s calendar may lack the punch of this week’s Federal Reserve meeting, GDP and payrolls trifecta. But upcoming reports will detail worker productivity, credit use and price pressures among service providers.

European Central Bank Picked Tough Time to Diet. The European Central Bank picked a difficult time to go on a diet. Faced with a weak economy and inflation rates edging toward zero, the ECB’s balance sheet—its holdings of securities and loans—has been shrinking fast, by over €1 trillion since 2012.

Euro-Zone Producer Prices Rise for First Time in 2014. Prices of goods leaving the euro zone’s factory gates rose in June and for the first time since December, an indication that the currency area may not sink much deeper into a period of low inflation that could hinder its recovery.

BOE’s Dale Leaves to Become BP’s Chief Economist. The Bank of England said Monday that one of its top officials has quit to take up a new role as chief economist for oil and gas giant BP PLC. Spencer Dale, the BOE’s executive director for financial stability, joins BP Oct. 27 after an unspecified “cooling off period,” the central bank said.

Adam Posen on Japan’s Recovery: Going Right, Just Not Going Well. A year and a half after Prime Minister Shinzo Abe launched his program to end Japan’s long slump, a number of economists are turning skeptical about prospects for success. One remaining optimist — albeit with some caveats — is Adam Posen, president of the Washington D.C.-based Peterson Institute for International Economics, and a long-time student of Japanese economics and finance.

Argentina Default Brings Reserves into Focus. Now that Argentina finds itself in a judicially-driven default of unknown duration, the eyes of Argentines and investors will no doubt turn to the central bank’s $29-billion stockpile of foreign currency, which the government uses to pay its creditors and defend the peso. Those reserves will come under pressure in the months ahead as seasonal soy export dollars wane and capital flight, imports and debt payments gobble up hard currency – Dow Jones Newswires

Employers are adding to payrolls at the best clip of the recovery this year, 230,000 a month, and that with acceleration comes better hiring in typically higher-paying fields such as construction, manufacturing and the government. Construction payrolls have grown, on average, by 23,500 each month of 2014. That’s a jump from the average monthly gain of just 8,600 the prior three years. Manufacturers have added 15,000 jobs each month this year, compared with just under 10,000 the prior three years. 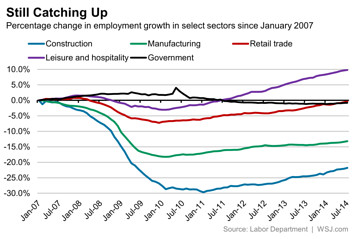 Why So Few People Are “Marginally Attached” to the Labor Force. Economists attempting to dissect the U.S. labor market in recent years have been perplexed by the number of people leaving the labor force entirely.  In a little over a decade, the number of people either working or actively looking for work has declined to 62.8% from 67.3%. Recently the White House Council of Economic Advisers weighed in on this debate. They argued that slightly more than half of the decline of the labor force is due to the aging of the population. And aging clearly has a role. More and more of the Baby Boomer generation, born after World War II, are reaching their 60s (the oldest Boomers are nearly 70) and retiring. 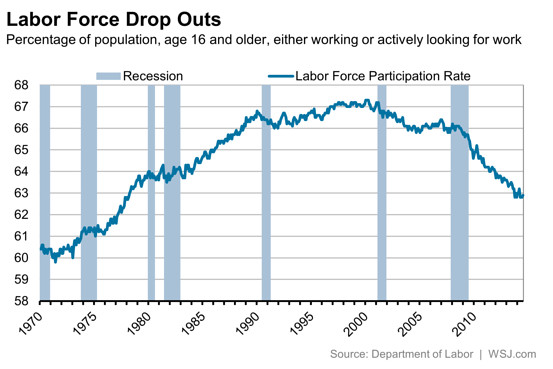 Justin Lahart of the Journal considers the labor-force participation rate. “A stabilizing participation rate would slow the pace of the decline in the unemployment rate. And while factors including an aging population and a deterioration of skills probably mean participation won’t soon return to its pre-recession level, even a modest increase could matter a lot,” he writes in Heard on the Street.

One of the big debates over the Federal Reserve’s extraordinary stimulus policies focuses on wages, writes Mark Whitehouse at Bloomberg View. “Some would like to see them growing faster, while others worry that raises could trigger an inflationary spiral. Whatever your perspective, the latest data from the Labor Department don’t show much evidence of wage acceleration.”

-U.S. manufacturing activity accelerated in July, according to a survey released Friday by the Institute for Supply Management, with the manufacturing purchasing managers index advanced to 57.1 last month from 55.3 in June to its highest reading since April 2011.

-Brazil posted a $1.58 billion trade surplus in July, narrowed from the $2.37 billion surplus in June, the trade ministry said Friday. In the first seven months of the year, the country posted a trade deficit of $916 million, compared with a deficit of $4.97 billion in the same period a year earlier. Dow Jones Newswires