Watch what the Fed does – and what it says.

The U.S. Treasury market has been selling off on the prospect the Federal Reserve might scrap or dilute its commitment to keep official interest rates near zero for a “considerable time” until after the end of its bond-buying program, currently expected in October.

However, there is good reason to believe Fed officials might not change their statement language very much at all this week. If they drop the “considerable time” language, many investors would see that as a signal that a March rate hike is on the table – and that does not appear to be the consensus within policy making Federal Open Market Committee. It is certainly not the prevailing market view, which still sees policy makers waiting until at least next summer before taking action.  Moreover, Fed Chairwoman Janet Yellen has noted the potential risks of reversing course on policy too early.

Many Fed watchers viewed Ms. Yellen’s remarks at Jackson Hole as tilting hawkishly, in the sense that she appeared more open to the view that labor slack as diminished significantly, which could justify raising rates sooner than next summer. She was trying to underline the message that continued improvement in the labor market that outpaces Fed expectations might be met with earlier-than-expected rate increases. However, the August employment report—released after her Jackson Hole speech—showed a disappointing gain of just 142,000 jobs last month, breaking a recent trend of monthly gains above-200,000.

At the same time, inflation continues to undershoot the central bank’s official target and, at most recent blush, moved downward, not upward.  All of which would justify a patient attitude on interest rate hikes – and on the Fed’s signals about their likely timing.

Kuroda Assures Businesses BOJ Will Act if Needed. Bank of Japan Gov. Haruhiko Kuroda offered businesses assurance that the central bank won’t hesitate to take fresh easing action if needed to achieve its inflation target and get the economy out of years of deflation.

Five Questions About the ECB’S Asset Buying. The European Central Bank will buy asset-backed securities to expand its balance sheet, to steer more money into the economy and to spur private-sector lending. Yet differences have emerged over the role governments should play in deepening the pool of ABS for the ECB to buy.

ECB’s Liikanen: If Low Inflation Persists, ECB is Committed to Further Measures. The European Central Bank can further expand its monetary support if low inflation persists too long, ECB Governing Council member Erkki Liikanen said Tuesday. “Should it become necessary to further address risks of too prolonged a period of low inflation, the Governing Council has underlined that it is unanimous in its commitment to using additional unconventional instruments,” said Mr. Liikanen, who is also Bank of Finland’s governor – Dow Jones Newswires.

Eurozone Wage Growth Picks Up in Second Quarter. Wage growth across the 18 countries that share the euro picked up in the three months to June, as did total labor costs, both signs that inflationary pressures in the eurozone may be set to pick up.

U.K. Inflation Rate Dips Unexpectedly In August. The U.K.’s inflation rate dipped unexpectedly in August, suggesting the Bank of England will be in no hurry to raise interest rates even though the economy is growing at a solid rate, official data showed on Tuesday.

Academics Get Caught Up in Debate Over China’s Interest Rates. The central bank’s push to liberalize interest rates is running into an unexpected new problem – opposition from some prominent Chinese economists. The academics, who usually back market-oriented reforms, don’t oppose freeing deposit rates per se. Rather, they say, interest rate liberalization should be a lower priority than other changes.

Brazil’s Central Bank Becomes Unlikely Star in Presidential Campaign. Central bank governance isn’t an issue most politicians waste much breath on, but Brazilian voters are getting an earful in the midst of a tight presidential race. With the Central Bank of Brazil under fire for failing to stem inflation, the main candidates have come out swinging on who should control the institution.

Australian House Prices Stir Worries. Australia’s central bank is becoming increasingly concerned by the country’s soaring house prices, minutes of this month’s policy meeting published Tuesday showed. In its most severe warning yet on house prices, the Reserve Bank of Australia said surging investor demand for property may cause the market to overheat and invite sudden price falls. A housing-market crash might undo a lot of the central bank’s efforts supporting a still-fragile economy trying to cope with a downturn in mining investment.

Australia’s Central Bank Holds Off Macroprudency. Australia’s central bank is worried about surging house prices, but it appears no closer to clamping down further on mortgage lending, unlike its counterparts in countries such as New Zealand, Canada and the U.K.

India’s Rajan Tells Banks to Strengthen Pre-Loan Checks. Indian central bank Gov. Raghuram Rajan said banks should strengthen the process of evaluating the credit worthiness of projects and not rely on outside agencies, a practice that has led to deterioration in the quality of loans.

Economists Split on Next Move for Malaysia Interest Rates. Economists are deeply divided over the next policy move by Malaysia’s central bank, which raised interest rates in July for the first time in three years, as the domestic economy stays robust while household debts continue to rise.

Russia Considering How to Support Banks Over Dollar Liquidity Deficit. Russia’s finance ministry and the country’s central bank are discussing how to help the nation’s banks overcome the current dollar liquidity deficit, the deputy finance minister said Tuesday. Speaking to reporters Alexei Moiseev admitted the problem exists but said it is the Bank of Russia’s responsibility to find a solution – Dow Jones Newswires.

When a country’s economy grows too slowly, the standard short-term remedies are to increase government spending, cut taxes or reduce interest rates. When none of those options is available, governments often resort to pushing down their currencies to make their exports more attractive to foreigners (and, these days, to push up import prices and thus bring inflation back up to desired levels). When the world economy is sputtering, and every big country increases spending, cuts taxes and reduces interest rates, the global economy benefits from the increase in demand.  That’s the story of 2009. But when individual countries lean heavily on pushing their currencies down, that tends to shift demand from one place to another rather than increasing the total. That is a “currency war.” And we may be on the verge of one. 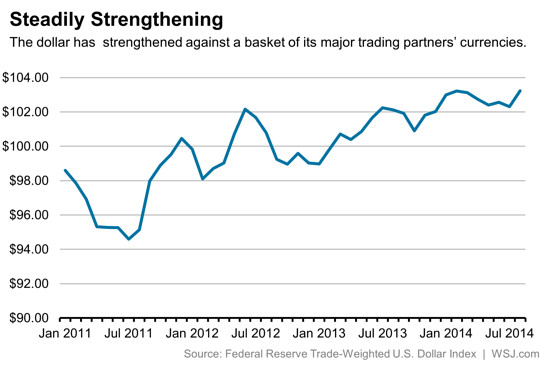 Recent economic data have turned this week’s Fed meeting “into a cliffhanger for markets and a challenge for a central bank that has struggled before to effectively and ably communicate tricky policy transitions,” Mohamed A. El-Erian writes in a Bloomberg View column. “I strongly suspect that when the Fed ponders how to communicate with investors this week, it will take into account what happened early last year when former Fed Chairman Ben Bernanke introduced the concept of a ‘taper’ to investors. The result was a widespread financial market disruption. This ‘taper tantrum’ alarmed a Fed that has no choice but to artificially support financial markets with forgiving interest rates as a means of pursuing its broader economic objectives.”

If the Fed wants to normalize monetary policy gradually, “it may want to get started soon,” Andrew Wilson writes for the Financial Times. “The U.S. economy is improving rapidly. Based on previous experience, the central bank might have already begun to raise interest rates were it not for lingering concerns about the long-term effects of the financial crisis. Looking back at the Fed’s last three major tightening campaigns, conditions today are comparable in many cases and, in some areas, significantly better.”

The Fed’s meeting this week “comes amid increasing pressure to raise short-term interest rates sooner rather than later,” Josh Bivens writes for the Journal’s Think Tank. “A lot of this debate concerns wage trends that are very recent or even forecast in the future. It’s crucial that the Fed allow longer-run wage trends to inform its decision making.”

It’s a scary world for investors, but “financial markets act as if everything is just fine,” E.S. Browning writes for the Journal. “Investors widely believe the Federal Reserve and other central banks will do what it takes to keep economies and financial markets healthy.”

-U.S. industrial production fell in August for the first time since January, the latest sign of uneven improvement in the economy.

-Russia said it would create a multibillion-dollar emergency fund for companies hurt by Western sanctions imposed over the Ukraine crisis, a sign that the country is girding for a long period of economic isolation.

-Happy birthday to the Central Bank of Azerbaijan: Its predecessor, the State Bank of Azerbaijan, was chartered this date in 1919. The current central bank opened its doors in 1992, after Azerbaijan again gained its independence.