The Wall Street Journal’s Daily Report on Global Central Banks for Wednesday, August 27, 2014
Sign up for the newsletter: http://on.wsj.com/grandcentralsignup.

“September and October of 2008 was the worst financial crisis in global history, including the Great Depression.” –Ben Bernanke

BLACKSTONE’S TAKE
There is a new “it” indicator in Europe: the five-year, five-year swap rate.

It may look like a typo, but this index has generated rampant speculation in financial markets that the European Central Bank will launch a large-scale program of public and private debt purchases—known as quantitative easing or QE—in the next few months.

ECB chief Mario Draghi made it famous at his Jackson Hole speech Friday when he noted that financial measures of inflation expectations have weakened.

“The 5-year/5-year swap rate declined by 15 basis points to just below 2% – this is the metric that we usually use for defining medium term inflation,” Mr. Draghi said.

Financial markets have rallied since. Bond yields are down in Europe, and equities jumped. The euro has lost ground on hopes for more aggressive ECB efforts to fight low inflation and spur stronger economic growth.

So what is this new best friend of QE advocates? The index measures investors’ bets on what the inflation rate will be starting in five years and lasting another five. If the swap rate falls, investors expect less inflation. It’s not a perfect measure—no gauge of inflation expectations is—but the ECB likes it, and that’s what counts.

And here’s why it matters: Mr. Draghi has said that if the ECB thought the longer-term outlook for inflation was eroding, then QE would be an appropriate response. With annual inflation just 0.4% in July—far below the ECB’s 2% target—any weakening in price expectations raises the risk that too-low inflation will become entrenched.

Still, markets may have gotten ahead of themselves. Mr. Draghi said in the same speech that the package of measures the ECB unveiled in June—rate cuts, new bank loans and preparations to buy asset-backed securities—should be enough to boost the euro zone’s sluggish economy.

The four-year bank loans haven’t been made available yet–they will be starting next month. Plans to purchase ABS are “fast moving forward,” Mr. Draghi said Friday.

In short, there’s a lot of easing in the pipeline, and the ECB may want to see the effects before pulling the trigger on full-blown QE.

But if they do, markets will have the “five-year, five-year” to thank.
-By Brian Blackstone

MORNING MINUTES: KEY DEVELOPMENTS AROUND THE WORLD
ECB and Fed Face Policy Divergence, For Now. The European Central Bank and the Federal Reserve may soon see policies going in vastly different directions. Many market participants took ECB President Mario Draghi’s speech in Jackson Hole—in which he warned about declining inflation expectations–as a signal that the ECB will embark on a broad-based asset-purchase program, known as quantitative easing, in coming months. And many observers expect the Federal Reserve to start raising rates by the middle of next year.

Hungary Leaves Key Rate Unchanged After Two Years of Cutting. Hungary’s central bank kept its main interest rate unchanged for the first time in two years on Tuesday after saying in July it had ended an easing cycle that had left rates at a record low. The National Bank of Hungary said it will maintain loose monetary conditions for a sustained period to ensure it will meet its 3% inflation target.

Central Banks in Russia, Kazakhstan Increase Gold Holdings. The central banks of Russia and Kazakhstan continued to boost their gold holdings in July, suggesting emerging markets remain committed to bolstering their reserves of the precious metal despite a pullback in its value.

Europe’s Banks Boost Lending in Asia. European banks are lending in Asia at the fastest pace since 2008, attracted by the region’s relatively strong economic growth and expanding list of large companies.

U.K. Competition Watchdog Joins Currencies Probe. The U.K.’s antitrust watchdog has joined a raft of global regulators probing possible wrongdoing in the currencies market, underscoring how the sprawling investigation may have expanded in scope in recent months.

China’s Central Bank Grants More to Agriculture. The People’s Bank of China said Wednesday it has given another 20 billion yuan ($3.2 billion) through its relending facility to the agriculture sector, in its continued efforts to boost economic growth with targeted easing measures. —Dow Jones Newswires

India’s Economy is the Best of the Broken Brics. The Brics have all fallen down, but the slow rebuilding has begun at only one of them—India. Yet for investors, this rejuvenation might not happen as fast as they seem to expect.

Bernanke Says 2008 Meltdown Was Worse Than Great Depression. Former Federal Reserve Chairman Ben Bernanke, a prominent student of the Great Depression, has said the 2008 financial crisis was worse than its 1930s counterpart. Mr. Bernanke is quoted making the statement in a document filed Aug. 22 as part of a lawsuit linked to the 2008 government bailout of insurance giant AIG.

GRAPHIC CONTENT
Demand for new homes has largely stalled this year as U.S. buyers lean toward lower-priced, previously owned houses. New single-family houses are selling at a slightly weaker pace than in 2013, while sales of existing homes have strengthened through the spring and into summer as buyers find properties at prices they can afford and in neighborhoods they want. 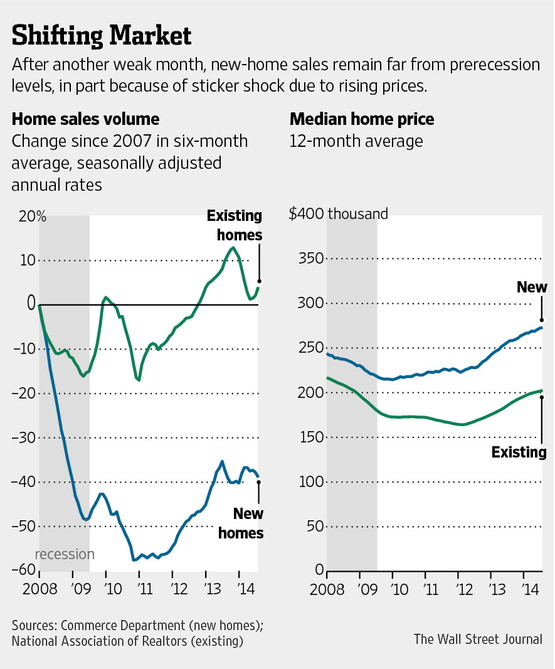 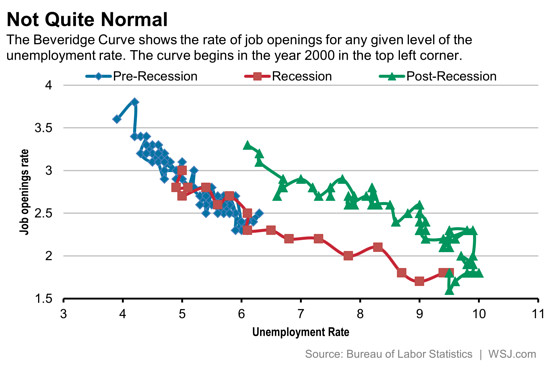 COMMENTARY
ECB President Mario Draghi “certainly stole the show this year” at the Kansas City Fed’s annual Jackson Hole symposium, despite a high-profile speech from Federal Reserve Chairwoman Janet Yellen, Gavyn Davies writes in the Financial Times. “In fact, as the ECB President himself remarked, many of the key elements in the Draghi and Yellen speeches seem largely interchangeable. Although this similarity has been clear for a long while in the writings of the ECB’s economic research department, it has never before appeared with such clarity in the pronouncements of an ECB President.”

Lifting the U.S. ban on exporting petroleum would lead to higher prices for U.S. crude oil and lower retail fuel prices for American consumers, Michael D. Plante writes in an Economic Letter from the Dallas Fed. “This may sound counterintuitive — how can fuel prices fall if crude oil becomes more expensive? But rising oil prices in the U.S. do not necessarily translate into higher gasoline and diesel prices. Those refined product prices are determined in the global market, whereas crude oil prices reflect distorted local market conditions in the U.S.”

BASIS POINTS
-Orders for big-ticket U.S. manufactured goods jumped to a record in July thanks to a surge in aircraft purchases, while underlying gauges of demand indicated strong momentum in broad business spending.

-A 209-year-old Swiss bank, Pictet Group, publicly disclosed financial results for the first time in its history on Tuesday, underlining the sea change in the country’s traditionally secretive banking sector.

-PolitiFact has rated former presidential hopeful Herman Cain’s claim that “real wage growth has been flatlined because of the policies of the Federal Reserve” over the last 40 years as “mostly false.”