DA COSTA’S TAKE: THE FED STILL HAS LITTLE REASON TO WORRY ABOUT INFLATION

Inflation chatter is heating up again among Wall Street economists. Wage pressures, some analysts argue, may be right around the corner as the unemployment rate falls and job growth picks up.

While a sluggish economic recovery has proven inflation hawks wrong time and again, that has not stopped some forecasters from predicting that price increases will accelerate someday because of the Federal Reserve’s unconventional policies of holding short-term interest rates near zero for years and buying bonds to lower long-term rates.

Indeed, the Fed’s preferred measure of inflation—the Commerce Department’s personal consumption expenditures index–has been undershooting the central bank’s 2% target for two years. Any reading that finally approaches 2% – and even one that surpasses it slightly – is likely to be welcomed rather than feared by Fed Chairwoman Janet Yellen and many of her colleagues.

Regulators Said Deutsche Bank Suffers From Litany of Reporting Problems. An examination by the Federal Reserve Bank of New York found that Deutsche Bank’s giant U.S. operations suffer from a litany of serious problems, including shoddy financial reporting, inadequate auditing and oversight and weak technology systems, according to documents reviewed by The Wall Street Journal.

Wall Street Cut From Guest List for Jackson Hole Fed Meeting–Bloomberg. Wall Street doesn’t lead to Jackson Hole this year. As the Federal Reserve Bank of Kansas City prepares to host next month’s annual gathering of central bankers in Wyoming, seasoned Fed watchers from the financial markets, including the chief U.S. economists of the biggest American banks, aren’t being invited, according to past participants.

Fed Concerned About Effects of New Interest Rate Tool on Markets. When the Federal Reserve started tests late last year of its so-called reverse repo facility, some officials hoped it would play a starring role in the campaign to raise interest rates when the time comes. But now the Fed thinks the new tool will play no more than a “useful supporting role,” largely because of rising concerns about its potential effects on the financial system, according to the meeting minutes of the Fed’s June policy meeting and recent comments by Fed officials.

Global Banking Group Warns of Market Correction Ahead. Uncertainty breeds volatility. That’s why even though volatility levels are near record lows, the Institute of International Finance sees choppy markets ahead.

Behind the Trading Burst That Shored Up Wall Street’s Bottom Line: Draghi. The burst of trading that helped save Wall Street’s second quarter started with comments made by a central banker an ocean away. European Central Bank President Mario Draghi’s dovish remarks on June 5 about how it plans to fight low inflation kicked fixed-income markets into high gear, halting a trading slowdown that threatened to torpedo the biggest U.S. banks’ quarterly results.

Czech Central Banker Concerned Over Eurozone Deflation Risks. Tame price rises in the European single currency bloc are causing headaches for the Czech National Bank as it struggles to push inflation back to its 2% target by using a nonstandard policy of keeping the koruna weak after cutting interest rates to near-zero levels, the central bank’s governor said Tuesday.

Bulgarian Central Bank Governor Offers to Resign. The governor of Bulgaria’s central bank offered to resign Tuesday to allay concerns over the institution’s credibility amid a deepening political and banking-sector crisis. Ivan Iskrov his offer to step down is contingent on parliament swiftly appointing a successor, a condition that is unlikely to be met as parliament itself may vote this week to accept the cabinet’s resignation before dissolving itself.

BOE’s MPC Has No “Preset Timing” For First Rate Move. Bank of England policy makers had no “preset timing” for a first rise in their benchmark interest rate when they met in July, and still see arguments for and against an early move. Minutes from the meeting released Wednesday showed all nine members of the Monetary Policy Committee voted to leave the key interest rate at a record low of 0.5% – Dow Jones Newswires

U.S. consumer inflation continued to stiffen in June but largely decelerated outside a jump in gasoline prices, and food costs in particular slowed after surging in recent months. There’s little sign of runaway prices that would force the Federal Reserve to quickly raise interest rates to check inflation. 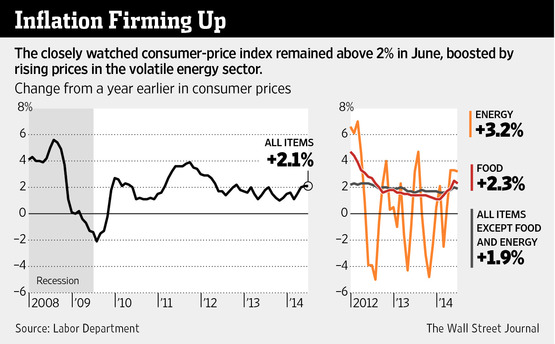 GDP Growth: Will We Find a Higher Gear? The Atlanta Fed’s GDPNow model, as of Monday, “is reading an annualized second-quarter growth rate at 2.7%. Given that the economy declined by 2.9% in the first quarter, the prospects for the anticipated near-3% growth for 2014 as a whole look pretty dim,” write Dave Altig and Pat Higgins on the regional reserve bank’s blog.

Patience is a virtue, and “investors betting on a weaker euro have had to be patient indeed,” writes Richard Barley in the Journal. “But the tide may slowly be turning in their favor.”

The debate over legislation that would require the Fed to use a formal policy rule continues with John Taylor responding to Alan Blinder in the Journal. “There is nothing inherently mechanical about having a strategy or clearly stated method for achieving particular goals. In my view, it is the Fed’s repeatedly interventionist and ad hoc actions in the past few years that are knee-jerk and mechanical.”

-Italian bank loans continued declining in June but at the slowest pace since March last year, a rare piece of good news for the battered Italian economy.

-Overseas banks are free to participate fully in the Philippine economy for the first time, after President Benigno Aquino III signed a law removing restrictions on foreign ownership.

-The Brazilian government cut its economic growth forecast for 2014, reflecting the sluggish expansion already seen so far this year.The country’s gross domestic product will grow 1.8% in 2014, compared with the 2.5% projected by the government earlier this year, according to a report released Tuesday. The government also raised its forecast for inflation for the year, to 6.2% from 5.6%.

-Growth in the euro zone’s fourth-largest economy picked up pace in the second quarter, Spain’s central bank said Wednesday, as it raised its economic projections for this year and next.