The Wall Street Journal’s Daily Report on Global Central Banks for Tuesday, May 5, 2015: 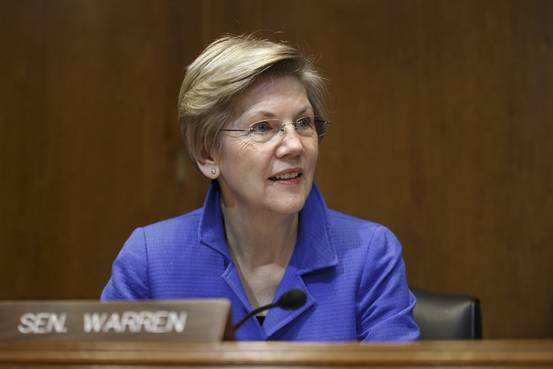 A debate in Washington D.C. these days about the Federal Reserve’s emergency lending powers provides a window into the strange and transformative power of the nation’s capital to turn success into failure and vice versa.

During the financial crisis, the Fed used its “13(3)” lending powers – so-named after the section of the Federal Reserve Act which grants the central bank sweeping lending power in “unusual and exigent” circumstances — to prevent a national financial collapse. Moving beyond its traditional mandate of interacting only with commercial banks, the Fed extended trillions of dollars of credit to investment banks, commercial paper markets, money market mutual funds and in individual bank bailouts.

The 13(3) section of the law grew out of lessons from the Great Depression, when the Fed was slow and cautious in providing credit to a collapsing banking system. Determined to avoid repeating mistakes of the Depression, former Fed Chairman Ben Bernanke used these powers aggressively and expansively.

A bipartisan group of lawmakers wants to curb such lending during the next crisis. Sen. David Vitter (R., La) and Sen. Elizabeth Warren (D., Ma) of the Senate Banking Committee  want to write new restrictions setting time limits on how long a bank can rely on Fed loans and setting guidelines to ensure the loans aren’t too cheap. The rules would be an extension of 13(3) restrictions already encoded in the Dodd-Frank law. In a letter to Fed Chairwoman Janet Yellen last August, the lawmakers criticized the Fed’s 13(3) lending as a staggering bailout that created a moral hazard which encourages banks to take excessive risk.

The Fed made many mistakes leading up to and after the financial crisis. Officials have acknowledged they failed to properly regulate banks. It is possible the low interest rates the Fed allowed before the crisis fed the speculative boom that nearly crashed the financial system, though there’s no consensus on this question. Washington policy-makers more broadly fumbled many regulatory policies – including allowing Fannie Mae and Freddie Mac to become unwieldy and conflicted suppliers of credit to the national mortgage system.

The 13(3) powers only came into play after these and other factors helped to drive the financial system to the brink. It’s hard to argue Fed 13 (3) crisis programs in late 2008 didn’t help to prevent a bad situation from becoming much, much worse. Yet here we are six years later, Fannie and Freddie are still standing, and Congress might take another crack at 13(3). 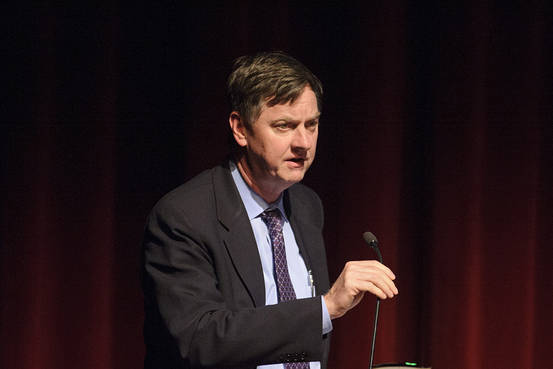 Fed’s Evans Advocates for Early-2016 Rate Increase. Chicago Fed President Charles Evans repeated on Monday that he believes raising short-term interest rates this year would be a bad idea. “Economic activity appears to be on a solid, sustainable growth path, which, on its own, would support a rate hike soon,” Mr. Evans said in a speech in Columbus, Ind. “However, the weak first-quarter data do give me pause, and I would like to see confirmation that they are indeed a transitory aberration.”

Yellen: Fed Is Providing Lawmakers with Names of Staffers in Leak Probe. The Federal Reserve is providing a congressional panel with the names of its staffers who had contact with a consulting firm that published details of market-sensitive policy deliberations in October 2012, “with the understanding that the names will be kept confidential,” Fed Chairwoman Janet Yellen said. The list names all Fed employees who had contact with the firm from June to October 2012–including Ms. Yellen, who met with an employee of the firm in June of that year. “I did not convey any confidential information,” Ms. Yellen said.

U.S. Banks Expect Rise in Energy-Sector Loan Defaults. Banks in the U.S. are bracing for defaults on loans to the oil and gas sector amid low crude prices this year, according to a Fed survey. “Banks expected delinquency and charge-off rates on such loans to deteriorate over 2015, but they indicated that their exposures were small, and that they were undertaking a number of actions to mitigate the risk of loan losses,” the Fed’s Senior Loan Officer Opinion Survey said Monday. 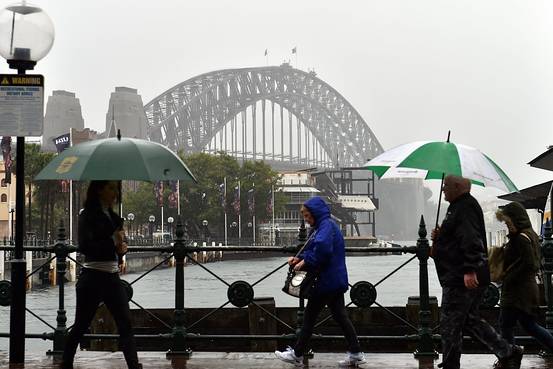 Reserve Bank of Australia Cuts Benchmark Rate to Record Low 2%.  Australia’s central bank cut interest rates for the second time this year, moving to shore up economic growth in the face of falling commodity prices and a China slowdown.

EU Lifts Eurozone Growth Forecast. European Union economists said cheaper oil and central bank stimulus should help deliver faster growth in the region this year, but questioned whether Europe’s economy would continue to expand at these rates over the longer term.

Inflation Expectations Tick Up. Inflation expectations are picking up again, as a rebound in oil prices helps ease an early-year deflation scare. Measures tracked by the Federal Reserve and the European Central Bank have risen to the highest levels since December.

Thai Central Bank Drives Down Baht. Thailand’s baht slumped to its lowest level in five years against the U.S. dollar, as the Bank of Thailand steps up currency-weakening measures in hopes of propping up the faltering economy.

Nonbank Lending’s Shadow Grows in Asia. As debt has grown across Asia, an increasing portion of the lending has come from nonbank lenders — raising regulators’ concerns about the stability of their financial systems. “Shadow banking” has been a well-documented driver of China’s debt boom, accounting for about a fifth of total lending since 2008. But shadow banks also have boosted lending in South Korea, Thailand and Malaysia, all places where consumers have grown increasingly indebted. 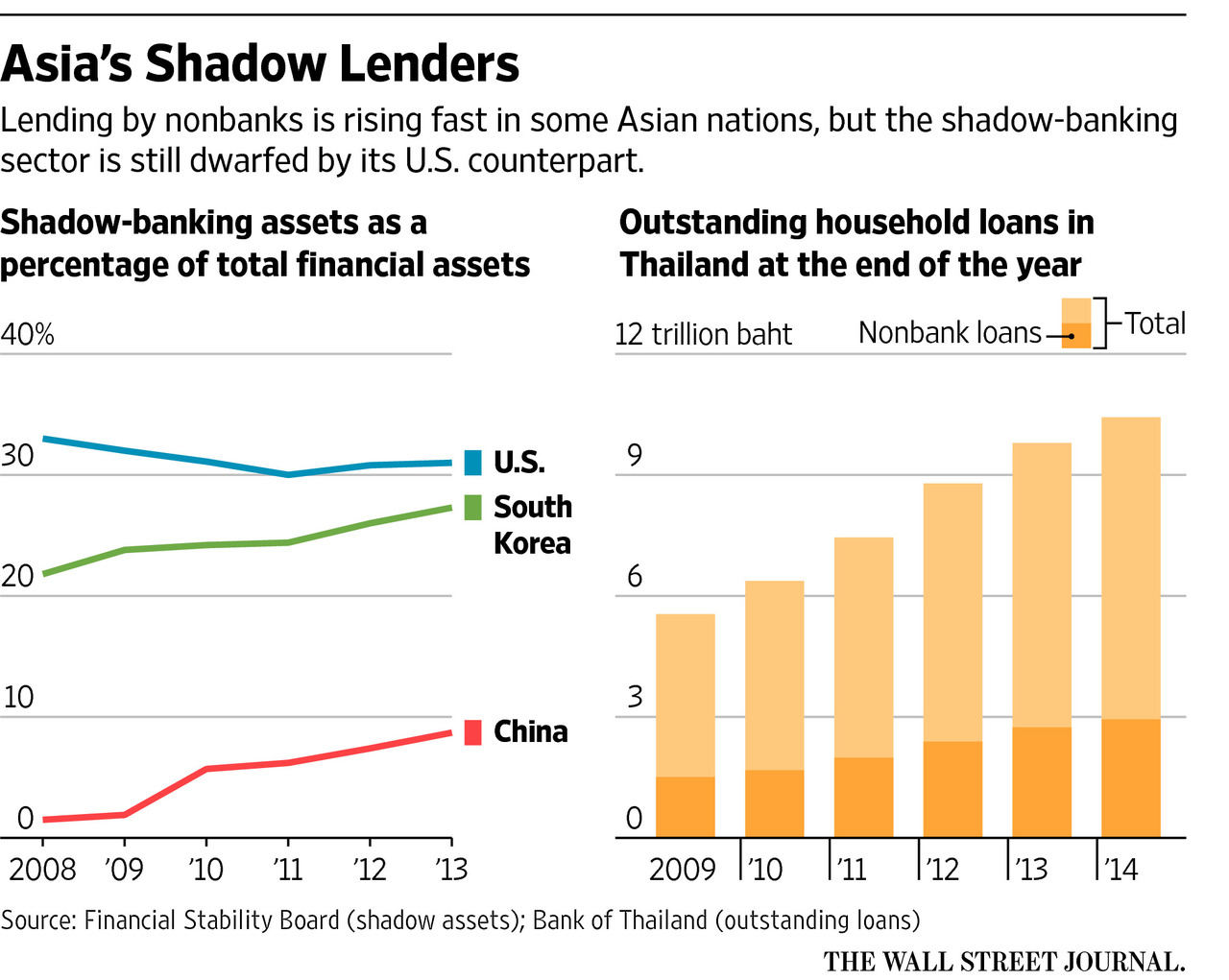 IMF: U.S. Energy Boom Will Give a Modest Boost to the Economy. The U.S. energy boom may offer a modest boost to the U.S. economy but probably won’t noticeably alter the country’s overall balance of trade, income flows and financial transfers, according to a new working paper published by the International Monetary Fund.

Interest-Bearing Securities When Interest Rates are Below Zero. “Structuring interest-bearing securities in a world where interest rates are below zero is challenging because negative rates are terra incognita,” Kenneth Garbade and Jamie McAndrews wrote on the New York Fed’s Liberty Street Economics blog. “Issuers faced a similar problem of issuing securities in a novel interest rate environment in the late 1970s and early 1980s when interest rates reached historically high levels. They responded by issuing single-payment zero-coupon securities and strippable securities (to mitigate the problems of reinvestment risk and duration drift as a function of yield changes). If negative interest rates persist, we can reasonably expect comparable design innovations.”

Governments Should Boost Growth Through Domestic Demand, not Currency Wars. “The world would be better off if most governments pursued policies that boosted growth through domestic demand, rather than beggar-thy-neighbor export measures,” Nouriel Roubini writes in a Project Syndicate column. “But that would require them to rely less on monetary policy and more on appropriate fiscal policies (such as higher spending on productive infrastructure). Even income policies that lift wages, and hence labor income and consumption, are a better source of domestic growth than currency depreciations (which depress real wages).”

India’s Aborted Central Bank Plan Has Few Mourners. The Reserve Bank of India is “one of very few institutions in India that are both feared and trusted,” Andy Mukherjee writes in a Reuters Breakingviews column. “It would have been a folly to pare down its regulatory role from ensuring overall financial stability to just overseeing banks. A proposed appellate authority with the power to second-guess the RBI’s decisions would have further undermined the central bank’s authority.”

Central Banks Must Face Up To Own Failure. In a posting on VoxEU, Cardiff University’s Patrick Minford writes that central banks were largely responsible for the financial element of the Great Recession, and that increased regulation of the banking system in recent years is unnecessary and damaging to growth.  ”It would be better if the central banks looked to the beam in their own eye, rather than examining the mote in the eye of private banks,” he writes. “They should pay attention to a properly stabilising monetary policy and scale back the new policies of direct regulation, which are both disruptive and unnecessary.”

–The eurozone’s manufacturing sector continued to expand in April, albeit at a slightly slower pace than in March, as solid orders helped companies to raise prices.

–A large pile of debt on the books of India’s big infrastructure companies is complicating Prime Minister Narendra Modi’s plans to boost the country’s economy and improve its woeful roads, electric grids and other public works.

– The economies of the Middle East and North Africa continue to expand despite the fall in oil prices but growth remains too tepid to help tackle the region’s biggest challenge of unemployment, according to the International Monetary Fund.

–Indonesia’s economic growth slowed to a more than five-year low in the first quarter, which could erode confidence in President Joko Widodo’s ability to turn the economy around quickly.