Put aside the hawks and doves labels for a moment. There are two camps forming in the Fed’s emerging debate about when to start raising short-term interest rates.

One side sees the jobless rate falling, inflation picking up and froth developing in financial markets and is getting itchy to consider the first round of interest rate increases.

The other side acknowledges the job market is improving faster than expected and inflation has moved off its lows. But after years of false starts, low inflation and economic uncertainty, this group wants to be absolutely sure the economy is on solid footing before proceeding with interest rate increases. This camp doesn’t want to undermine a fragile upturn, especially when its ammunition is so low.

“You might call this a ‘whites of their eyes’ approach to pulling the trigger on raising rates,” Dennis Lockhart, president of the Atlanta Fed and a part of the latter camp, said in a speech last week.

The first camp sees rates moving higher early next year, or earlier, not long after the Fed’s bond purchases are completed in October. Dallas Fed president Richard Fisher joined this group Wednesday. “Early next year, or potentially sooner depending on the pace of economic improvement, the [Fed] may well begin to raise interest rates in gradual increments, finally beginning the process of policy normalization,” he said in a speech in Los Angeles Wednesday.

Those in the other camp are sticking to a view that rates will stay near zero until well into 2015 or even later. Charles Evans, president of the Chicago Fed, falls into the latter camp. “I want to have a lot of confidence that we get to our inflation objective” of 2%, he said in an interview with The Wall Street Journal Wednesday.

The leader of them all, Fed Chairwoman Janet Yellen, made clear during two days of congressional hearings this week she falls into the latter camp. She acknowledged the job market is improving more quickly than expected and said that could lead to earlier-than-planned rate hikes if sustained. But like others in the latter camp, she embraced a “show-me” point of view.

“We have in the past seen sort of false dawns, periods in which we thought our growth would speed, pick up and the labor market would improve more quickly,” she told Senators Tuesday. “Later events have proven those hopes to be, unfortunately, over-optimistic. So we are watching very carefully, especially when short-term, overnight rates are at zero, so we have no ability to lower them further.”

The rate outlook will likely shift as the confidence level of this latter group grows or diminishes about the Fed’s goals of 2% inflation and steady, low unemployment being safely within reach.

Fed’s Evans: Labor Market Improving  More Quickly Than He Expected. Chicago Fed President Charles Evans joined the chorus of central bank officials acknowledging the employment picture has improved faster than forecast, but he added in an interview he doesn’t want to embrace interest rate increases until he’s sure inflation is at 2% and will stay near there.

U.S. Economy Picking Up During Summer. Economic activity in recent weeks got back on track after a rough start to the year, with the labor market gaining strength and facing worker shortages in some areas, according to the Federal Reserve’s latest survey of regional conditions.

Feeble UK Wage Growth May Delay BOE Rate Rise. Britain’s economy is booming, but there’s little sign of that in the pay packages of British workers. That could make Bank of England officials delay a rise in their benchmark interest rate.

ECB Review of Banks to Be Published Late October. Banks in the euro zone will have little advance notice concerning the results of the European Central Bank’s review of their balance sheets before the results are publicly communicated in late October, the ECB said on Thursday.

Bank of Canada Keeps Neutral Policy Bias. The Bank of Canada chose to omit previous mentions about the risks of low inflation in Wednesday’s policy decision, but signaled that its neutral policy bias remains firm amid “serial disappointment” with the global economy.

Ukraine Central Bank to Raise Key Lending Rate. The National Bank of Ukraine, which is moving toward an inflation-targeting policy, said the decision to raise rates was taken due to a rise in consumer prices, citing a marked weakening of the national currency in the first quarter of the year, a rise in utility tariffs and the continuing standoff between government forces and the pro-Russian separatists in the east of the country.

Brazil Central Bank Leaves Benchmark Rate Unchanged. Brazil’s central bank left its benchmark interest rate unchanged Wednesday at 11%, on the expectation that the yearlong cycle of rate increases that ended last May will start to bring down inflation amid slowing economic growth.

Former Indonesia Central Bank Official Sentenced. A former deputy governor of Indonesia’s central bank was sentenced to 10 years in prison on Wednesday after being convicted of corruption and abusing power in a bank bailout in 2008.

Japanese Bond Yields Offer a Hint Of Trouble The Bank of Japan says it is succeeding in its campaign to spur growth and inflation. But yields on government bonds—which generally rise when investors see an improving economy and rising prices—are near their lowest level since April 2013, indicating that the central bank’s campaign isn’t proceeding completely as planned.

Japan Upgrades View on Economy. Japan upgraded its overall assessment of the economy in July for the first time in six months as consumers reopened their wallets following an initial pullback in spending in the wake of a sales tax increase. In its monthly economic report released Thursday, the government said the economy was recovering moderately and that a drop in consumption in response to the tax increase in April “is easing.”

Economists Question Beijing’s Stimulus Habit. A rebound in second-quarter growth is stabilizing China’s economy for now but causing some economists to question whether the government’s reliance on piecemeal stimulus measures is delaying needed reforms and piling up more bad debt.

Declining churn in the labor market may be holding back people’s careers and the entire economy. One of the key questions about this phenomenon is whether it’s the temporary result of an especially severe recession, or if some sort of structural changes in the U.S. economy are making the labor market permanently less dynamic. David Mericle, an economist at Goldman Sachs, shares the following chart that tracks the overall dynamism of the U.S. labor market, by combining into a single index a range of dynamism measures from several different economics reports: the Job Openings and Labor Turnover survey, known as JOLTS, the Business Employment Dynamics data, and data from the Labor Department’s Current Population Survey on job transitions. 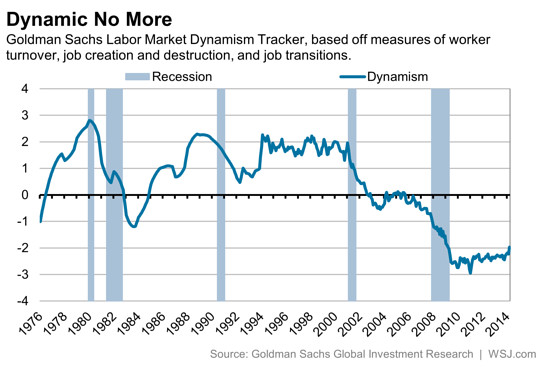 Largest Banks Rank Highest On Fed Risk Data. How risky are the biggest U.S. banks? That question is at the heart of a debate that has raged since the financial crisis, and it is central for policy makers deciding how big banks should be regulated. Last month, the Federal Reserve released new data shedding some light on how to answer that question, so the Journal looked deeper the numbers.

Duquense Capital’s Stanley Druckenmiller used the podium at the Delivering Alpha conference Wednesday to rip Fed policy. He says the Fed is engaging in the same risk-encouraging policies that enabled the real-estate bubble in the early aughts and led to the credit crisis, and that neither he nor the Fed nor anybody else knows how this is all going to end.

Stanford University’s John Taylor writes in the Wall Street Journal in support of a formal, mathematical rule to guide the U.S. Federal Reserve’s interest-rate decisions, arguing it offers the best prospect of a return to the strong economic growth with declining unemployment and inflation of the 1980s and 1990s.

– A gauge of producer-price inflation ticked higher last month, a new sign that consumer prices could be slowly moving closer to the Fed’s target rate.

– U.S. industrial production increased modestly in June but at a slower pace than May, the latest sign of steady but sluggish improvement in consumer and business spending during the second quarter.

-Construction across the 18 countries that share the euro fell in May, another sign that the currency area’s economic recovery remains weak. The European Union’s statistics agency also confirmed Thursday that the annual rate of inflation remained at 0.5% in June.