HILSENRATH’S TAKE
Big Wall Street hedge funds and money managers see an increasing probability that the Federal Reserve will raise short-term interest rates before the end of June next year.

The New York Fed has been polling 30 representatives from big hedge funds including D.E. Shaw, Moore Capital Management and Brevan Howard, in addition to asset managers such as Blackrock and Vanguard since the beginning of the year, asking them when they think the Fed will start raising short-term interest rates and other questions.

It’s striking that the money managers expect the Fed to be more aggressive than Wall Street banks and brokers, the so-called “sell side” of finance. A separate New York Fed survey of primary dealers – which are the big banks and brokers that trade securities with the Fed – showed 37% in July expected the Fed to start raising rates before the middle of 2015, up from 32% in June and 29% in January.

Though expectations for early rate hikes are rising among both groups, markets seem to be taking it in stride. Yields on 2-year Treasury notes are up to 0.49% from 0.3% in March. That shows investors see the time of liftoff approaching, but they don’t see the Fed moving very aggressively once it starts.

MORNING MINUTES: KEY DEVELOPMENTS AROUND THE WORLD
Fed’s Yellen Remains Mum on Timing of Rate Change. Janet Yellen delivered a cliffhanger in the mountains of Wyoming. Encouraged by progress in the labor market, but uncertain if it’s enough, the Fed chairwoman and other officials here for a central banking conference left the public guessing about when they’ll start raising short-term interest rates.

More Economists Say Fed Will Wait Too Long to Raise Rates. Economists overwhelmingly expect the Federal Reserve to hold off raising short-term interest rates until at least 2015. But nearly a third say doing so would mean the central bank waited too long, a new survey found. 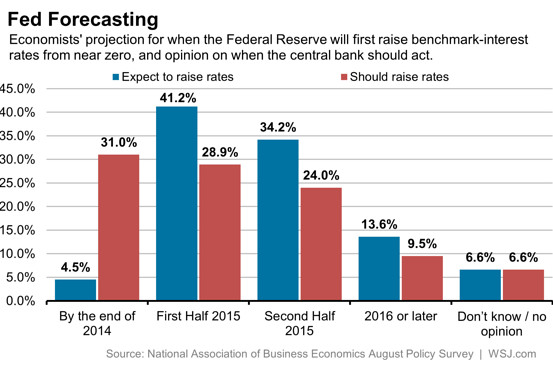 Bank of England Deputy Sees Likely Rise in U.K. Wages. Wages in the U.K. may soon start to pick up but any quickening in pay growth could be held back by weak productivity growth and an expanding workforce, according to one of the Bank of England’s top officials. Ben Broadbent, the BOE’s deputy governor for monetary policy, said Saturday at the Federal Reserve Bank of Kansas’s annual conference in Jackson Hole, Wyo. that survey data and skills shortages in the U.K. economy suggest that wage growth may soon start to rise.

BOJ Governor Says More Stimulus Not Needed for Now. Once again, a growing chorus of private economists and investors are doubting the adequacy of Bank of Japan policy to end Japan’s long slump, and calling for still more stimulus. And once again, BOJ Gov. Haruhiko Kuroda seems to be moving to douse such expectations, insisting that, despite a recent bout of bad data, his campaign to end deflation remains on track at the current pace of easing.

BOJ Mulling More Upbeat Language on Economy. The Bank of Japan is considering using more upbeat language to describe the state of the economy in its monthly economic assessment, suggesting it doesn’t see the need for immediate action to give faltering growth a shot in the arm.

ICYMI: Check out our special edition Saturday newsletter roundup on the Jackson Hole proceedings. Or see all the WSJ Jackson Hole coverage over the past few days.

Euro-zone Inflation to Cool in August. Annual inflation in the 18 nations that use the euro is expected to have cooled further in August, according to a preliminary estimate due Friday, underscoring the weakness of the currency’s union’s economy.

GRAPHIC CONTENT
U.S. Bond Issuance Nears $1 Trillion. U.S. corporate-bond issuance is hurtling toward a record for the third consecutive year, as companies take advantage of a surprising interest-rate decline to stock up on cash. Companies around the globe have sold about $994.9 billion of bonds in the U.S. this year as of Thursday morning, according to data provider Dealogic, which has figures dating back to 1995. That is up more than 4% from a year ago, with sales on pace to cross the $1 trillion mark at the fastest clip on record.

RESEARCH
ECB Economists Find Benefits in ‘Fiscal Devaluation’. One of the thorniest issues facing the euro zone is how members of the 18-country currency bloc can improve competitiveness and exports without having a national currency that can be devalued. In a paper published by the European Central Bank, a trio of economists have come up with a way: “fiscal devaluation.” What it basically means is using fiscal measures–in this case higher consumption taxes and lower social contributions paid by companies–to boost competitiveness, giving exporters a leg up and raising investment.

COMMENTARY
John H. Makin writes on the American Enterprise Institute’s web site the Fed should not respond to the strong second-quarter rebound in growth by quickly tightening policy, which could encourage the bursting of an asset bubble and an ensuing collapse of liquidity.

There’s more criticism of Thomas Piketty’s best-selling “Capital in the Twenty-First Century,” this time from Daron Acemoglu and James Robinson, two well-known economics professors. Their criticisms are many, but the main strain is that Mr. Piketty has overreached in trying to formulate a sweeping theory of economics.

BASIS POINT
– Ben Bernanke, once the most powerful economic policy maker in the world, is running for vice president of the American Economic Association.