Yields on 10-year Treasury notes dropped below 2.5% last week. This is remarkable given the fact that U.S. job growth is heating up, inflation readings firming and the Federal Reserve has said affirmatively that it plans to stop buying U.S. and mortgage bonds by October. Any of those developments normally drive bond prices down and yields up. But yields on long-term bonds are now down more than half a percentage point this year. They’ve reversed about two-fifths of the increase registered between April 2013 and December 2013, when investors started worrying about the Fed ending its bond purchase program and unloaded Treasurys – an event known affectionately on cable news channels as the “taper tantrum.”

It is remarkable how wrong Wall Street has been about 10-year yields. When surveyed in January by the Federal Reserve Bank of New York, more than three-quarters of the 22 big Wall Street primary dealers that trade the instruments estimated 10-year yields would be 3% or more around now.(See responses to question #6.)

There are several explanations for the latest development:

1) In a world in turmoil, investors are hungry for super safe assets like U.S. Treasury bonds. Spanish and Italian debt were favorites earlier this year, but in the past month, as tensions mounted in the Middle East and Ukraine, investors flocked back to Treasurys, stodgy Germany bunds and British gilts, over risky rivals.

2) Foreign central banks can’t give up their addiction to U.S. Treasurys and a tried-and-true economic formula. As WSJ bond reporter Min Zeng highlighted last week, the Chinese government added $107.21 billion to its Treasury holds in the first five months of 2014. Buying U.S. debt helps to weaken the yuan and support exports. Chinese officials are trying to wean their economy off its dependence on exporting to U.S. consumers, but with domestic growth foundering, they appear to be having a hard time doing it.

3) The secular stagnation argument is winning the hearts and souls of bond investors. This argument – popularized by former Obama administration adviser Lawrence Summers – holds that the U.S. economy can’t grow as fast as it used to grow. Slow underlying growth means lower long-term interest rates. Economists surveyed by the Wall Street Journal earlier this month said they had marked down their estimates for the economy’s long-run growth potential to 2.3%, well below its post-World War II average growth rate of 3.5%. This theory is underpinned by the fact that the U.S. economy contracted in the first quarter, assuring that growth for the year would once again wind up below Wall Street economists’ and Federal Reserve officials’ predictions.

It’s worth remembering these developments the next time you hear somebody warn the world is about to lose its appetite for Treasury bonds and U.S. borrowing costs will soar. Those warnings have been around for so long – and wrong for so long too.

Swiss and Chinese Central Banks Agree on a Currency-swap Deal. The Swiss national Bank and the People’s Bank of China have reached a currency-swap agreement, allowing the two central banks to buy and sell their currencies up to a limit of 150 billion renminbi, or 21 billion Swiss francs ($23.4 billion).

China Government Bond Sale Falls Short of Target. China failed to sell all the government debt it had planned to Friday, in the second incomplete auction in just over a month as rising yields and signs of improving economic growth turn investors away from the safety of bond markets.

Lagarde Says ECB Should Keep Loose Policy as Recovery Weak. International Monetary Fund chief Christine Lagarde on Friday called on the European Central Bank to pursue an accommodative monetary policy and warned that markets may be too positive about the European recovery.

Bank of Portugal Moves to Calm Investors Over Espirito Santo. Portugal’s central bank on Friday moved to calm fears about lender Banco Espírito Santo SA, saying it has enough capital buffer to protect itself from its troubled parent even in a worst-case scenario.

Iceland’s Central Bank Sees Economic Recovery but Flags Risks. Iceland’s central bank governor said in an interview his country’s economy is coming back strongly from its financial meltdown six years ago but the process of removing capital controls, in place to steady the currency, has the potential to knock the recovery off course.

Myanmar Set to Grant Licenses to Foreign Banks. Myanmar is preparing to grant up to 10 foreign bank licenses next month, allowing overseas lenders to start doing business in the country after decades of being frozen out. But to protect domestic banks, recipients of the coveted licenses will be limited to banking for foreign corporations and foreign-exchange services.

GRAPHIC CONTENT
The Fed in recent months has flagged the U.S. housing slowdown as a concern. The latest data, out last week, showed U.S. home construction tumbled in June due to a stretch of wet weather in the South. Housing starts sank 9.3% to a seasonally adjusted annual pace of 893,000, the weakest showing since September 2013. But not all the signals were disheartening. 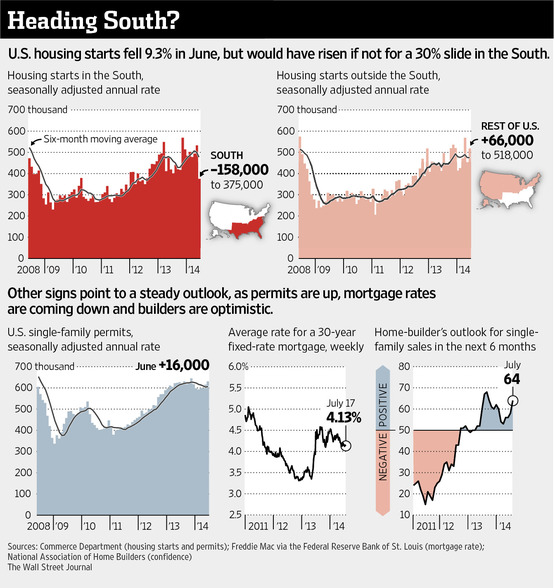 RESEARCH
Debt Sustainability at the State Level in India. Indian state governments have significantly improved their debt positions in the last decade, “reflecting the impact of both favorable macroeconomic conditions and policy efforts by the central and state governments,” according to a working paper published Friday by the Reserve Bank of India.

COMMENTARY
The heart of the Federal Reserve Accountability and Transparency Act, now pending in the House, “has little to do with either transparency or accountability,” writes Princeton University economics professor and former Fed Vice Chairman Alan S. Blinder for the Journal. “Instead, it seeks to intrude on the Fed’s ability to conduct an independent monetary policy, free of political interference.”

BASIS POINTS
– The share of U.S. firms giving pay raises has nearly tripled since last fall, according to a new survey of business economists by the National Association for Business Economics, though official data on U.S. workers’ earnings haven’t shown any broad acceleration in wage growth.

– U.K. house prices rises appear to be flattening out, not just in frothy London, but across the U.K.

– The Bank of Italy slashed its projection of Italy’s gross domestic product growth rate for 2014 to 0.2% from its January forecast of 0.7%, while it raised its 2015 forecast to an increase of 1.3% versus an earlier estimate of 1.0%. – Dow Jones Newswires

-The Central Reserve Bank of Peru on Friday cut its forecasts for economic growth to 4.4% this year, down from a previous outlook of 5.5%. –Dow Jones Newswires