Grand Central: Why You Might Pencil in a 3.5% Fed Funds Rate in 2017 – Real Time Economics

Federal Reserve officials will be updating their forecasts for the economy at their policy meeting next week, including for the first time estimates for growth, unemployment, inflation and interest rates in 2017. What will the world look like to the Fed in three years’ time?

To take measure of how Fed officials might see the world, The Wall Street Journal asked private sector economists for their own 2017 forecasts in our latest monthly survey.

They see the Fed slowly continuing a cycle of interest rate increases by then. The median estimate for the Fed’s benchmark federal funds rate in the fourth quarter of 2017 was 3.5%, a touch below the Fed’s estimate of the long-run equilibrium for the interest rate of 3.75%. The median estimate among surveyed economists for the fed funds rate at the end of 2016 is 2.5% and at the end of 2015 it is 1%, compared to near-zero now.

It has the makings of a shallow interest rate cycle, in line with the growing perception that the U.S. economy’s long-run growth potential has slowed. By comparison, the fed funds rate went up to 5.25% in 2006 and hit 6.5% in 2000.

On the path toward this uninspiring long-run equilibrium, economists surveyed by the WSJ see the unemployment rate falling to 5.1% in the fourth quarter of 2017. That’s a little odd. It was 6.1% in August and has been falling by nearly a full percentage point a year for much of the recovery. Economists thus see the descent slowing, even though they see economic growth accelerating. Projected growth of gross domestic product in 2017 is 2.8%. That compares to a depressing post-crisis average of 2.2%. Maybe they see a productivity rebound in the making.

Inflation rises benignly during the forecast period to the Fed’s 2% objective, according to economists surveyed by the WSJ. And there are no apparent bubbles or breaks on the horizon seen by economic forecasters.

Will the economy ever get above 2.5% growth rates again? Will the Fed finally see fit to raise rates? Can the U.S. get through a decade without a financial bubble? Can inflation remain benign with so much money in the banking system?

Forecasters will surely be off on something here. What do you think it is?

Fewer Economists See Fed Rate Hikes Starting Before Next Summer. Fewer economists expect the Federal Reserve will begin raising interest rates early next year, according to a survey by The Wall Street Journal in recent days. A third of the business and academic economists who responded to the survey, conducted Friday through Tuesday, said they expected the Fed will begin raising rates sometime before June 2015. That’s down from 45% in the survey conducted Aug. 1-5.

Fedspeak Cheatsheet: What Are Fed Policy Makers Saying? Several Fed officials speaking ahead of their Sept. 16-17 policy meeting indicated they expect to keep short-term interest rates low well into next year. That said, a number of them also warned they could move sooner if the labor market improves faster than they are forecasting. With the Fed on track to end the program in October, several officials said they want to link the timing of their first rate increase more clearly to economic data. Here’s a sampling of what they have said since their last policy meeting in July.

Draghi Urges Eurozone Governments to Increase Investment Efforts. European Central Bank President Mario Draghi called on governments Thursday to take forceful action to spur investment, including the provision of state guarantees for small-business loans and beefed-up public investment spending by governments that can afford it. “If we don’t manage to get investment going again, we will weaken the economy in the short run and undermine its prospects in the long run,” Mr. Draghi said in prepared remarks to a conference in Milan.

ECB Won’t Rule Out Buying Government Bonds–Constancio The ECB wouldn’t want to be forced to buy government bonds, its vice president said in an interview with German newspaper Boersen-Zeitung to be published Friday. Still, the ECB isn’t ruling out the possibility of such purchases, he said. Vitor Constancio also said the ECB doesn’t intend to release a target volume for its purchase program of asset-backed securities and covered bonds that it announced last week. –Dow Jones Newswires

ECB Can Introduce Further Easing Measures If Needed, Liikanen Says. The European Central Bank can introduce new measures to ease monetary conditions further in the eurozone if needed, ECB governing council member Erkki Liikanen said in an interview published Friday. The ECB last week cut its policy rate to 0.05%, pushed its rate on bank deposits deeper into negative territory and said it would start buying private debt securities to stave off any threat of deflation. The bank still has plenty of tools left in its monetary-policy arsenal even after these measures have been deployed, said Mr. Liikanen, who is also the head of Finland’s central bank. –Dow Jones Newswires

New ECB Headquarters to Mark Building’s Dark Nazi Past. With thousands of ECB employees due to move into their new headquarters in a few weeks, ECB and city officials Thursday unveiled how they will acknowledge the building site’s dark history as the main deportation center for Frankfurt Jews in the early 1940s. Under a EUR8.4 million ($10.86 million) project funded mostly by the city of Frankfurt, with a EUR1 million contribution from the ECB, the ramp and cellars will serve as a memorial starting next year, with tours organized by a local museum.

BOJ’s Kuroda: No Need to Discuss Further Easing ‘For Now.’ Bank of Japan Gov. Haruhiko Kuroda said “there’s no need to discuss additional easing for now since prices are on steady track to achieving its 2.0% inflation target.” In his first-ever appearance on a live Japanese TV program, Mr. Kuroda repeated that the central bank won’t hesitate to take fresh action if its inflation target becomes difficult to achieve.—Dow Jones Newswires

Turkey Central Bank Chief Defends Rate Cut. Erdem Basci reaffirmed his commitment to fight inflation and defended the bank’s decision to avoid a sharp cut in interest rates, saying such a move could have an “undesired impact” on the country’s currency. Responding to criticism from government officials, who have urged the central bank to cut interest rates faster to boost economic growth, Mr. Basci said a severe cut to interest rates could spur Turks to sell liras to buy foreign currency. –Dow Jones Newswires

Brazil’s Central Bank Indicates No Rate Cuts Soon. Brazil’s central bank said it is still waiting for a year-long cycle of interest-rate increases that ended in April to take its full effect on inflation, and indicated it won’t start cutting rates soon despite the economy entering a recession in the first half of the year.

Here’s What the Bank of England Thinks of Bitcoin. Is bitcoin irrelevant to the U.K. economy? Well perhaps the biggest authority on that, the Bank of England, weighed in on the cryptocurrency on Thursday, and its conclusion is basically thus: While bitcoins in circulation in the U.K. pose no threat to the financial system, and perhaps never will, the technology raises interesting possibilities that could one day have ramifications for stocks, other financial products and even physical assets like gold.

Bank of Korea Holds Rates Steady. South Korea’s central bank on Friday kept its benchmark interest rate steady at 2.25% as widely expected. Many economists predicted that the Bank of Korea would pause to assess the effect of its monetary easing in August, when it cut rates by 25 basis points.

Bank Indonesia Looks To Fuel-Price Rise, Fed Moves. Bank Indonesia is maintaining its tight policy bias as interest rates in the U.S. and domestic fuel prices are set to rise, a senior central bank official said Friday.  The central bank held its key policy rate at 7.5% Thursday even as inflation has been falling in the past few months, hitting 4% in August.  “We need to factor in conditions in the next 12 months–there will likely be a Fed Fund Rate increase and domestically there’s a plan to raise fuel prices. On top of that we still have a challenge from our current account,” Bank Indonesia Senior Deputy Gov. Mirza Adityaswara said. – Dow Jones Newswires.

After an uneven first half of the year, most economists are relatively sanguine about the U.S. economy’s growth outlook. It’s the rest of the world that’s a concern, according to The Wall Street Journal’s monthly forecasting survey. More than 90% of the 48 surveyed economists—not all of whom answered every question—said they expect the U.S. economy to improve relative to the first half of 2014. None see the economic outlook deteriorating.The survey was conducted after last Friday’s weaker-than-expected August jobs report. 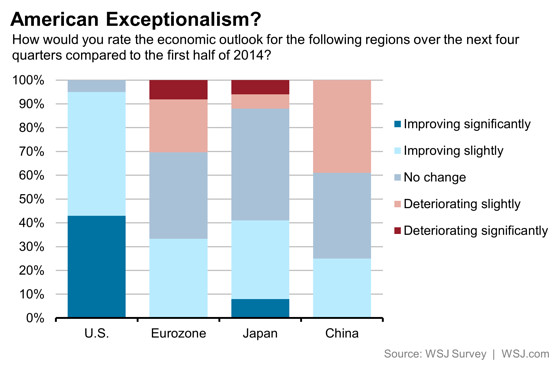 European ‘Project’ Not Irreversible, New Paper Says. There is still a modest risk that a weak economy and rising political dissatisfaction could unravel Europe’s currency union, despite gradual, halting progress toward further integration there, according to new research in a paper to be presented at this week’s Brookings Institution conference. In what the authors dub the eurozone’s Catch-22, they say widespread support for the euro itself masks a lack of momentum toward further political cohesion among the 18 states that use the currency.

Asia Less Vulnerable to Taper Tantrum, But Risks Remain. As American policymakers intensify their debate on when to raise interest rates, their Asian counterparts nervously wonder whether the next round of Federal Reserve tightening will trigger more market turmoil across the Pacific, like last year. Calm down, says a new report from Goldman Sachs GS +0.63% (Asia) L.L.C. Countries that saw a rout in currencies and stocks last summer have since moved to insulate themselves from further shocks — though Indonesia, and, to a lesser extent, India, remain susceptible.

“If you use the word “Keynesian” as a synonym for “socialist,” “progressive,” or “liberal,” well my friend, you’re doing it wrong,” writes Noah Smith at Bloomberg View. “If you’ve been involved in Internet arguments about economics, then you must have heard the term “Keynesian” being applied this way. And it seems to make sense. After all, many of the bloggers and writers who describe themselves as “Keynesian” are also of a liberal bent. And more importantly, John Maynard Keynes himself was in favor of some amount of wealth redistribution and government intervention in the economy. So why am I saying it doesn’t make sense to use the word “Keynesian” in this way? One reason is because this isn’t how academic economists use it.”

– Industrial production across the 18 countries that share the euro rose more sharply than expected in July, an indication that the currency area’s economy returned to growth after flat lining in the second quarter.

– European Central Bank policy makers, and those that follow their actions, should be paying closer attention to what’s happening in furniture or home-appliance stores across the eurozone. At least, that appears to be the conclusion one could draw from reading a small contribution to the ECB’s monthly bulletin, which was published Thursday.