The Federal Reserve is about to lose two of its most hawkish voters on policy decisions.

Charles Plosser said Monday he would retire from his post as President of the Federal Reserve Bank of Philadelphia March 1. Dallas Fed President Richard Fisher is required to step down in April because of Fed retirement rules. Mr. Fisher and Mr. Plosser both dissented on the Fed’s September policy decision. Both wanted to move away from the Fed’s assurances of low interest rates. Both have been regular dissenters in past decisions, wary of the Fed’s low interest rate policies and their impacts on inflation and financial stability.

What does the world look like to Fed Chairwoman Janet Yellen without two prominent hawks? The Fed’s quarterly interest rate guidance – known as its dot plot – provides some evidence. Presumably Mr. Fisher and Mr. Plosser have interest rate forecasts at the higher end of the range, given their voting records. Without two hawkish estimates, the median interest rate projection in 2015 is between 1% and 1.25%, compared to 1.25% to 1.5% with them. The median is between 2.5% and 2.75% in 2016 without the two hawkish estimates and between 2.75% and 3% with them. Put another way, without two hawkish estimates, the consensus for interest rates at the Fed would be about a quarter percentage point lower than it is now. Life becomes a little easier for Ms. Yellen to manage a slightly lower rate path.

Of course we don’t know yet who will be selected to replace Mr. Fisher and Mr. Plosser. Boards at the regional banks in Dallas and Philadelphia might want hawkish presidents to replace the two outgoing officials, in which case Ms. Yellen’s life won’t get any easier. Moreover, Ms. Yellen didn’t appear to be too concerned about their dissents in the first place. “I don’t consider two dissents to be an abnormally large number,” she said in her press conference. “It’s very natural that the Committee should have a range of opinion about a decision as crucial as what is the right time to begin to normalize policy.”

Fed’s Kocherlakota Seeks More Aggressive Approach to Inflation Target. Fed officials should make clear their 2% inflation goal is “symmetric” in that policy makers will be equally preoccupied about falling short of target as they are about exceeding it, Minneapolis Fed President Narayana Kocherlakota said Monday.  “Inflation persistently below the 2% target could create doubts in households and businesses about whether the FOMC is truly aiming for 2% inflation, or some lower number,” he told the Economic Club of Marquette County. He suggested the Fed commit to bringing inflation, which has been undershooting for some time, back to target within some specified time of perhaps two years.

Fed’s Plosser to Retire in March. Charles Plosser, president of the Federal Reserve Bank of Philadelphia, said Monday he will step down from his post on March 1, capping an eight-year tenure marked by steady warnings about the dangers of unconventional monetary policy.

ECB’s Draghi Keeps Door Open to Quantitative Easing. European Central Bank President Mario Draghi said Monday the central bank is ready to ease monetary policy further if needed to address a weak eurozone economy and prevent inflation from staying too low for a protracted period. His comments kept the door open to large-scale purchases of government bonds, a policy deployed aggressively by central banks in the U.S., U.K. and Japan but that that has been largely resisted by the ECB.

ECB’s Praet Defends Bank’s Policy on Strength of Euro. The ECB’s chief economist Monday rejected suggestions the bank was trying to push the euro lower to kick-start the bloc’s beleaguered economy, contradicting some of his colleagues on the bank’s governing council. “There is no willingness to talk down the euro,” Peter Praet, told a conference hosted by Deutsche Bank.

Eurozone Private-Sector Activity Slows in September. Activity in the eurozone’s private sector slowed again in September, indicating that the currency area is unlikely to emerge soon from economic stagnation and making it more likely the European Central Bank will soon have to announce a third wave of stimulus measures.

Bank of Israel Holds October Rate at Record Low. The Bank of Israel on Monday left the key lending rate unchanged at its record low of 0.25%, saying it is needed in an environment with almost no inflation and sluggish economic growth. The rate is likely to remain at this level through 2015, according to a statement released Monday by the bank’s research department – Dow Jones Newswires.

China Manufacturing Activity Grows Modestly in September. Factory activity in China improved in September, an early indicator showed Tuesday, providing a welcome sign as the world’s second-largest economy struggles with a downturn. Economists and investors are looking to China to give the global economy a boost as the European economy remains weak and the U.S. recovery has underwhelmed.

China’s Reform Zeal Remains Unclear. The upturn in a closely watched benchmark of Chinese factory sentiment on Tuesday eased concerns, at least temporarily, that the world’s second-largest economy is headed for a hard landing. After a raft of bad news in August, China’s first data point in September suggested factory owners were feeling a bit better about life, surprising many investors and economists who were bracing for the worst.

Australian Dollar’s Tumble Brings Some Relief.  The Australian dollar’s tumble to a seven-month low is likely to be quietly welcomed by country’s central bank, which had been running short of ideas about how to rev up the flagging economy.

Bank of Canada Official Says Neutral Policy Rate is Lower Than Before the Crisis. The recent global recession has exacted a toll on the Canadian economy such that the country’s potential growth and the Bank of Canada’s so-called neutral policy rate is lower than in the pre-crisis years, according to Bank of Canada Senior Deputy Governor Carolyn Wilkins, in her debut speech as bank’s second-in-command. The nominal neutral rate in Canada is estimated to be in the 3%-4% range, or between 1% and 2% in real or inflation-adjusted terms, Ms. Wilkins said. That is significantly below the 4.5% to 5.5% range for the nominal rate in the pre-crisis years —Dow Jones Newswires

Thailand Monetary Policy Needs No Adjustment, Says Bank Governor. Thailand’s central bank governor believes there is no need for any change in policy. “The (Bank of Thailand’s) economic report due out at the end of this month will show local demand and consumption have improved further, although exports and tourism will likely not,” said Prasarn Trairatvorakul, BOT governor – Dow Jones Newswires.

Ukraine Eases Requirements on Forex Conversion. In attempt to feed its domestic market with much-needed foreign currency, the National Bank of Ukraine on Monday eased requirements on conversion of incoming money, and simultaneously slashed the amount of currency a private person can buy at a bank in one day. The bank said the measures will be “temporary, and will be cancelled following the normalization of the currency market.”

Easy lending standards have helped set post-recession records for new-car sales. New-home building is barely rising, due in part to much tighter standards among mortgage lenders. This disparity underscores the divergent paths the two sectors have taken in the years since the financial crisis. So is it time to loosen up on mortgage lending? The answer is not that simple. Officials at the White House and the Federal Reserve point to tight credit as they flag worries about a soft housing recovery. Fed Chairwoman Janet Yellen last week labeled mortgage-market conditions “abnormally tight.” 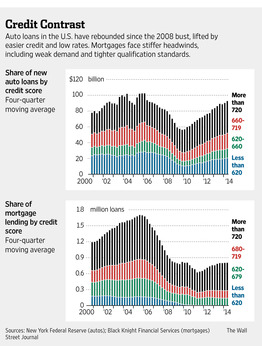 Why Wall Street Cares About Inequality. First, it was Standard & Poor’s.  Now, Morgan Stanley weighs in on income inequality in a new report. Why are these Wall Street institutions, normally focused on macroeconomic issues directly related to gross domestic product forecasts, suddenly chiming in on the issue? Because both firms find U.S. inequality is holding back economic growth. Morgan Stanley’s research suggests weaker-than-usual consumption at the lower end of the income ladder helps explain why this economic recovery has been particularly anemic.

Forecasting with the FRBNY DSGE Model. The Federal Reserve Bank of New York has built a dynamic stochastic general equilibrium model as part of its effort to forecast the U.S. economy. This week, the bank is offering a series of blog posts to provide background on the model and its use for policy analysis and forecasting. On Monday, economists discussed what DSGE models are, explain their usefulness as a forecasting tool, and preview the forthcoming pieces in this series.

As market participants get caught up in figuring out an exact start date for the Fed’s eventual rate-hike cycle, many forget that sometimes policy makers themselves are facing uncertain economic outcomes and policy decisions. Tim Duy, a professor at the University of Oregon and author of Tim Duy’s Fed blog, sees a communications benefit of Yellen’s indication there is considerable uncertainty around officials’ own forecasts for the path of rate hikes as illustrated in the dots chart. “The Fed is emphasizing the uncertainty of the forecast to ensure that market participants recognize another future is possible–and even perhaps more likely–than the lowest set of dots, as suggested by the upward drift in median rate projections.”

-Mubarak Rashid Al Mansouri has been named the United Arab Emirates’ central bank governor, according to a report by the state news agency Monday. Mr. Mansouri is the chief executive of the country’s sovereign wealth fund.