Greg Ip: As the Euro Nudges Up, Could U.S. Inflation Be Next? – Real Time Economics 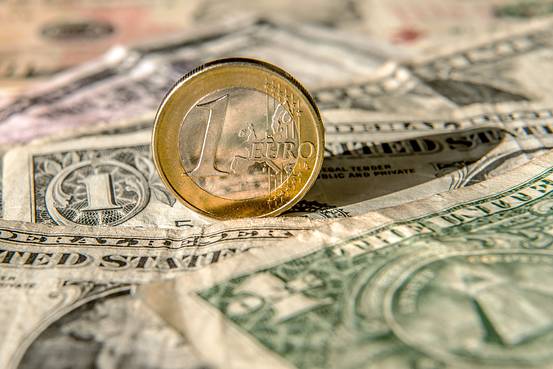 The euro on Thursday was 17% below purchasing power parity, its most undervalued since 2002.
PHILIPPE HUGUEN/AFP/GETTY IMAGES

If you believe the popular narrative, the world is now embroiled in a currency war, with the U.S. as the losing party. In the past year, the euro has plummeted and the dollar soared as the European Central Bank bought bonds and cut interest rates into negative territory, while the Federal Reserve has halted its own bond buying and is preparing to raise rates.

Yet when the ECB, as expected, expanded its bond program, known as quantitative easing, and cut rates further on Thursday, the euro rallied from $1.05 to $1.09. In part, that’s because the ECB eased less than many hoped. More important, though, is that the ECB’s actions have already done their work: The euro is dirt cheap based on fundamentals, and the Fed is soft-pedaling its own tightening plans.

Heading into Thursday’s ECB meeting, traders were deeply bearish on the euro, a common precursor to a rally. They weren’t as bearish as in March, which led Bianco Research to speculate that the euro had still further to fall. Nonetheless, odds are its long slump, and the dollar’s epic appreciation, are nearing an end, which could have important effects on inflation, growth and markets in coming months.

Currencies routinely “overshoot” to well above or below their long-run value. Last August, just before ECB President Mario Draghi hinted that QE was coming, the euro stood at $1.34, which was about 5% above its purchasing-power parity. That’s the value, by International Monetary Fund calculations, that make a basket of goods and services equal in price between the U.S. and the eurozone.

By March, with QE and negative rates in full swing, the euro had fallen to $1.05. It rallied thereafter before falling again to around $1.05 Thursday, just before the ECB’s announcement. That put it 17% below purchasing power parity, its most undervalued since 2002. 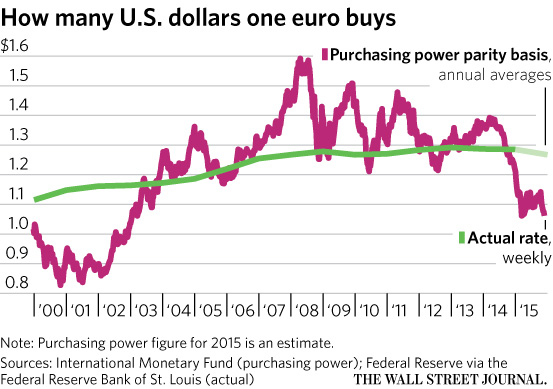 The ECB has hoped that a cheaper euro would stimulate exports and growth and push inflation back to its target of just below 2%. So far, it hasn’t pushed inflation up, but the region’s exports in the first nine months of the year have increased 6% from a year earlier, and the trade surplus has widened by 50%.

Thus, on a fundamental basis, the euro is quite cheap. This makes sense: With eurozone interest rates far below those in the U.S., an investor can justify holding euros instead of dollars only if the euro is expected to appreciate.

The flip side of a weak euro, weak yen and weak emerging market currencies is a strong dollar. In her testimony today, Fed Chairwoman Janet Yellen suggested the strong dollar has, through its effect on trade, subtracted half a percentage point from U.S. growth. By depressing import prices, it and the indirect effect of lower oil prices have shaved 0.25 to 0.5 percentage points off core inflation (which excludes food and energy).

But, she said, the dollar simply has to stop going up and oil prices to stop going down for core inflation, which is now around 1.25%, to return to at least 1.5%, though that is still short of the Fed’s 2% target.

There are good reasons to think the dollar won’t keep going up. The expected divergence between European and U.S. monetary policy is already baked into the currency’s price. Moreover, currency warriors often forget that when one central bank eases monetary policy, others often follow suit to offset their rising currency. It’s not a zero-sum game because both countries end up with easier monetary policy.

The strong dollar is one reason the Fed has taken so long to raise interest rates, and it’s a key reason that once they start to rise, the path will be gradual. This week Lael Brainard, a Fed governor, said the Fed would have to lower its planned tightening path for interest rates by one percentage point to offset the negative impact of the dollar’s rise since last summer.

Yet if the Fed’s forecast is correct, then stability in both the dollar and the price of oil mean inflation is about to start edging higher as well. That will not be enough to push it all the way back to 2%. Still, Ms. Yellen and company will have their work cut out explaining why, in the face of higher inflation, they should nonetheless take their time about raising rates.

ECB to Extend Asset-Purchase Program to 2017 or Longer