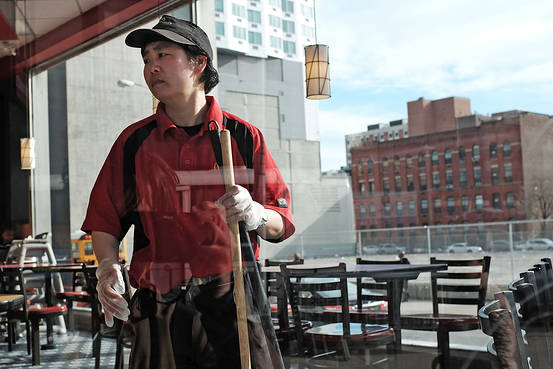 A McDonald’s employee works in a restaurant the morning earlier this year when thousands of people took to the street in Brooklyn, N.Y., to demand a minimum wage of $15 an hour. The company raised wages at roughly 1,500 restaurants in July.
SPENCER PLATT/GETTY IMAGES

The October jobs report was full of positive signs for the economy but by far the most important was the 0.4% jump in average hourly earnings, which brought the annual increase to 2.5%, the highest since 2009.

By broad measures, the labor market has gotten steadily tighter: The unemployment rate, at 5%, is down by half since 2010, and the vacancy rate is the highest since 2000. But until now, there has been precious little sign of broad upward pressure on wages. Many promising monthly jumps were followed by flattening later.

Is this one for real? There are reasons to believe it is. In the last year, many companies from Wal-Mart to McDonald’s announced broad-based wage increases for their lowest-paid employees. It was always an open question whether they were responding to public criticism of their low wages, or because they genuinely were having trouble filling job openings. Since self-interest is a more durable influence on business behavior than altruism, the second explanation would be the more encouraging, as it means the wage boosts were more likely to persist even at the expense of narrower profit margins, and that other businesses would have to follow suit.

Digging into the October data, it’s still unclear these employers are representative. Retail wages rose 0.2% after a 0.4% rise in September, keeping the annual increase at 3.2%. That’s good, but not a marked acceleration. Leisure and hospitality wages rose 0.4% but that followed a flat September and the annual gain is just 2.5%, which is actually a significant slowing from earlier this year.

More broadly, the hourly wage data have been volatile enough that reading a lot into October’s number is dangerous. Even if wages are on an upswing, there is nothing in the last few years to suggest a rapid acceleration is in the works.

Productivity gains remain quite sluggish, which is why labor costs, adjusted for productivity, are rising 2% per year. Thus, if hourly wages keep rising at 2.5%, either profit margins are going to be squeezed, productivity will have to rise, or they will be passed on to prices.

Of these three possibilities, the last seems least likely. Profit margins are quite wide and easily able to handle some rebound in labor expense, especially if accompanied by rising sales. Productivity is overdue for at least a modest cyclical uptick assuming economic growth doesn’t falter. As for prices, the fact inflation has remained below the Fed’s 2% target for so long speaks both to the lack of pricing power and the absence of the sort of inflationary psychology that would ease the way to higher prices.

So while the rise in wages should be welcomed by the Fed, it is not a sign that inflation pressures are about to build. Between the strong jobs report and a drumbeat of Fedtalk, the markets are coming around to the view that the Fed will start to raise rates in December. But there’s no rush. A few more months of wage gains like October’s would provide a more secure foundation on which to start normalizing rates.