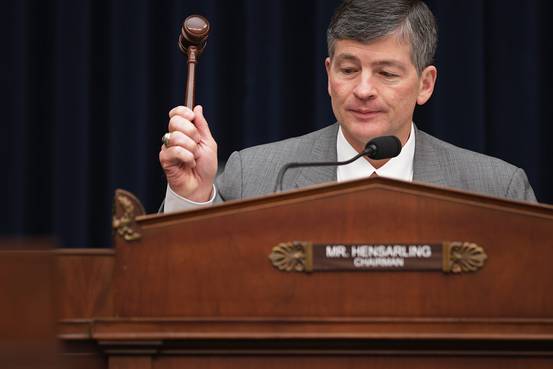 Last week the House of Representatives passed a bill that would bring about the most sweeping changes to the Federal Reserve since the 1930s. At the heart of the bill is a requirement that the Fed set interest rates according to a quantitative rule.

Like advocates of the gold standard, proponents of the bill blame many of the economy’s ills on the Fed exercising too much discretion because it succumbs to economic expediency or political pressure. Many see the Fed’s emergency lending during the crisis and its bond-buying since then as bailouts for big, reckless banks and a profligate federal government. They want rules to circumscribe such discretion.

But history shows that discretion is unavoidable no matter what sort of standard a central bank uses. “The practical difficulties of life cannot be met by very simple rules,” Walter Bagehot, an early editor of The Economist, wrote in “Lombard Street.” “Those dangers being complex and many, the rules for encountering them cannot well be single or simple. A uniform remedy for many diseases often ends by killing the patient.”

Legislating a rule doesn’t do away with discretion, but makes it more likely discretion will be exercised only after the rule has failed, perhaps at great economic cost.

The bill’s intellectual father is the economist John Taylor, who in a 1993 paper inferred a formula for how Paul Volcker and Alan Greenspan set interest rates from 1987 to 1992. Its components include the gap between inflation and its target, between economic output and its target, and the “neutral” real (inflation-adjusted) interest rate, which keeps the economy at full employment and inflation stable. Mr. Taylor had identified an empirical relationship, but this was not the same as a predictive law like the law of diminishing returns. There was no guarantee the formula would work in different conditions.

Central bankers find the Taylor rule a useful comparative benchmark. The House bill would go much further and require the Fed to adopt a “strategy or rule” then stick to it, or explain why it didn’t. Specifically, that rule must “include a function that comprehensively models the interactive relationship” between various economic inputs. Within 48 hours of every Fed meeting the chairman or chairwoman would have to submit the chosen policy rule to Congress, identify who voted for it, and certify that this rule would achieve “stable prices and maximum natural employment.” If Fed officials didn’t use the Taylor rule, they would have to explain why.

Congress’ watchdog, the Government Accountability Office, would then decide if the Fed had changed its rule and investigate whether the Fed was “in compliance” with the law.

Numerous Fed officials and economists have noted, no rule can anticipate all the shocks and economic changes the Fed is likely to encounter, from a financial crisis to the “zero bound” on interest rates to a change in the neutral interest rate. So the bill in effect orders the Fed to do something it believes impossible; it would be like ordering the Fed to design a stock-picking formula then prove it will always beat the market.

In a dynamic economy, rules are inherently at constant risk of obsolescence. Companies and banks routinely adapt their behavior to mitigate or evade regulation. In the 1970s, the Fed targeted the money supply to try and get inflation lower. From 1979 to 1982, interest rates swung wildly as the Fed responded to weekly fluctuations in its chosen money measure. But financial innovation had caused the link between that measure, growth and inflation to break down, and in 1982 the Fed abandoned formal targeting.

Even rules that do achieve economic stability will lead, as the economist Hyman Minsky predicted, to risk-taking and financial innovation that ultimately increases instability.

This means that discretion is unavoidable even with rules. Even in Mr. Taylor’s 1993 paper, it was clear that the Fed deviated from his presumed rule during the 1987 stock market crash and when Iraq invaded Kuwait, causing oil prices to spike.

Discretion was also commonplace under the gold standard, from who got to convert their currency to gold to what, besides, gold, could back currency. The classical gold standard from 1870 to 1914 in theory operated according to fixed rules, but as the economic historian Michael Bordo and his co-authors note in their book “Strained Relations,” the rules were “generally violated.”

In trying to adhere to the gold standard, central banks ultimately made things worse. Britain’s return to the pre-First World War price of gold put its economy into depression. France and the U.S., by not allowing gold inflows to expand the money supply, contributed to the global deflationary pressure that produced the Great Depression.

Central banks routinely use rules, including Mr. Taylor’s, as benchmarks for their decisions. But what if they were required to follow a rule? Mr. Taylor is at pains to note that the bill does not force the Fed to pick the Taylor rule; it can pick its own. Nor, he says, must it be “literal-minded or short-term” in applying its rule.

But the Fed would clearly be safer interpreting the law literally, since failure to follow its rule would invite an audit by the GAO and an order to appear before Congress.

That suggests two possible outcomes. One, the Fed will repeatedly change the rule or deviate from it, which defeats the supposed purpose of the rule, which is for the Fed be predictable and constant. Or the Fed, to avoid invasive audits by Congress, might stick to the rule longer than it should until the economic consequences are intolerable.

Stanley Fischer, now the Fed’s vice chairman, once said of exchange-rate rules, “The only sure rule is that whatever exchange-rate system a country has, it will wish at some times that it had another one.” Similarly, history suggests that if the Fed is forced to adopt a rule for monetary policy, it will eventually have to abandon it. The only question is how costly that process is likely to be.

Greg Ip: What Republicans Get Wrong About the Gold Standard