Greg Ip With Jon Hilsenrath: Why Safety Can Be Dangerous – Real Time Economics 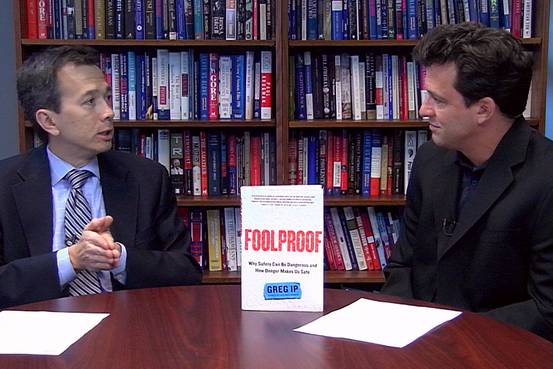 Greg Ip talks with Jon Hilsenrath about some of the themes in his new book, “Foolproof: Why Safety Can Be Dangerous and How Danger Makes Us Safe.”
THE WALL STREET JOURNAL

It is human nature. When we feel safer, we take more risks. This applies if you are wearing a football helmet and deciding whether to run headfirst into your opponent, or a banker who thinks there is little downside to your next big loan.

Greg Ip, The Wall Street Journal economics columnist, explains in his new book, “Foolproof,” why the steps we take as a society to make ourselves safer might actually make us prone to even greater risk. It is true of the football player flirting with concussion when he spears an opponent, or the banker flirting with financial disaster.

Why was the 2007-09 financial crisis so bad? Why were so many people fooled into a sense of complacency about the resilience of the financial system before it happened?

Mr. Ip shows how the trends that seemed to make the economy and financial system safer in the 1990s and 2000s–low inflation, capital in the banking system, the explosion of financial derivatives–conspired to put it at risk.

Here is a lightly edited excerpt from our discussion.

Mr. Hilsenrath: You argue in your book that what we do as a society, especially the government, to make us safer, actually puts us more at risk, and that this helps to explain the financial crisis we went through a few years ago. Explain your premise.

Mr. Ip: Well, we as a civilization have a very strong desire to create more stability and more safety. It’s what we’ve been doing for thousands of years, and by and large we’ve been successful. But in complex systems like the economy and the environment, there’s often a reaction by people and the environment that offsets the benefits of those efforts by the government. For example, if people feel safer, they will actually respond in a way to take more risks. And that’s true with the financial system. It’s true when you build a levee and people therefore live closer to the water on a floodplain.

The other thing that happens is sometimes we’re only aware of risks that are obvious to us because we’ve experienced them, and those are the ones that we as a society go after. If banks failed in the early 1980s, or nearly failed, we fix the banks. But then we don’t notice how risks migrate to other places–because the desire to take risks hasn’t changed, it’s just the ability to take them has been channeled elsewhere.

Mr. Ip: Football has always been violent. In the early days of the game, they didn’t wear hard helmets. They wore soft helmets, which were just designed to protect the ears. In the ’40s and ’50s they began to introduce hard helmets, which provided much more protection against things like skull fractures. But what it resulted in is that coaches learned that they could teach their players to use their head as a battering ram to bring down other players, a practice called spearing. So they would teach the kids to do this. But spearing actually increased the pressure on the spinal column and resulted in more paralysis and spinal injuries. So not until the NCAA and the NFL outlawed spearing was that problem controlled. But even today the fact that players wear helmets gives them more confidence to tackle with their heads, and it’s one of the reasons we have a concussion problem. Now, that isn’t necessarily a reason to get rid of helmets, because if you did you’d simply have different and possibly more serious injuries.

But I would analogize to, for example, financial derivatives, where banks will often say, well, I’m going to take on this risky position, but I’m going to protect myself by purchasing a hedge using a fancy derivative. But the sense of safety they get from that is actually a little bit false because now they find that they’re actually taking new and bigger risks that they wouldn’t have taken without that safety device.

Mr. Hilsenrath: Why did you write this book?

Mr. Ip: I have sort of a sense of guilt, almost, that despite having covered economics, finance and crises for about 20 years, I was caught as flat-footed as everybody else by the crisis. I really didn’t think something like that was possible. And on reflection, I realized that I myself had succumbed to this feeling that, “Boy, we have done so much to get rid of the risks to the economy it’s not possible to have another terrible event.” So I think I myself was–succumbed to that sense of complacency that I write about in this book.

I think the other reason I wrote was that I just feel fundamentally dissatisfied by the competing narratives that have emerged in the last seven years about the crisis. I could simplify them as follows: It’s all the fault of the greedy bankers, and so we have to regulate them better; or it’s all the fault of the feckless government trying to get people to buy houses they couldn’t afford, so we just have to get the government out of that business. And I think what I learned was that the story is much more complex, and that it isn’t really about people behaving badly–in some sense, it’s almost a result of people behaving well.

Mr. Hilsenrath: Let’s look directly at the financial crisis. How does this idea, this premise, that what the government had done, and what the banking system had done, to make us safer actually put everyone in so much peril?

Mr. Ip: Let me give you two specific examples of what the government did. Starting in the early 1980s under Paul Volcker, the Federal Reserve decided that high inflation was a big problem and they set out to crush it. And they did. It took a couple of very bad recessions, but they succeeded. They got it from double-digits down to below 3%. By eliminating inflation, they eliminated the greatest source of variability in the business cycle, and that’s the main reason why we had fewer recessions and the recessions we had were milder. Now that the Fed didn’t have to worry so much about inflation, they could focus on keeping the economy out of recession and keeping unemployment low.

That less-volatile business cycle encouraged people to say, well, if it’s less likely to have a recession, it’s OK for me to take on more risk and borrow more money to buy a house. The very sort of sense of feeling that the business cycle had been tamed led people to lever up and take more risk.

The other thing Volcker did was, although we almost forget it now, the U.S. banking system almost collapsed because of all the lending [banks] did to Latin America in the ’70s and the 1980s. So Volcker and then Greenspan set out to actually force banks to hold a lot more capital so that they would be less vulnerable in the event that they made some bad loans. And they succeeded. Banks actually had way more capital by the time of the financial crisis than they had 20 years earlier.

But by making banks hold more capital they also made banking less profitable, and so lending activity migrated out of banks into what we call the shadow banks. And so we had a proliferation of different types of financing in the capital markets, short-term IOUs called asset-backed commercial paper, money-market mutual funds, repo loans. And this, in a hidden sense, became sort of a parallel banking system that was much more fragile and ripe for a crisis.

Mr. Hilsenrath: We ended up with a recession far worse than any recession we experienced during the days of the moderation.

Mr. Ip: Quite apart from what the government did, banks and financiers themselves thought that they had learned the lessons of previous crises by taking steps to protect themselves.

So, for example, banks said, Well, if we’re going to borrow, we’re not going to use unsecured commercial paper, which people will run away from because it’s not very safe. We’re only going to use secured loans, such as so-called repo loans. But once these became huge, they themselves became a source of fragility in the system.

Mr. Hilsenrath: So you use other examples. There are government requirements that people wear seat belts. That gives people a sense of safety and they drive more recklessly. So this [raises] the question: Should the government get out of the business of trying to make us safer? Should it get out of the business of mandating seat belts and controlling forest fires and trying to protect the banking system?

One of the things that I hammer away at in my book is that we actually have the tools to measure when government is making us safer and when it isn’t, and seat belts are a good example. In the ’70s there were economists who argued that seat belts were causing people to drive faster and kill more pedestrians. But after 15 or 20 years of research, we can now conclude that’s actually not true. Seat belts, on net, do make people safer. So, on an evidence-based process, we should have people wear seat belts.

And the same is true of finance. It is probably the case that some regulation of financing will make crises less likely, and I would say higher capital requirements are an almost fail-safe way to make banks safer. But there are a lot of other things that may not be doing that, and so we need to be careful about sort of, like, rushing to one conclusion or another.

And we need to be careful that if you actually stop people from taking risks, you might actually lose some of the benefits of that risk-taking in the end. We need banks and financiers and entrepreneurs to take risks because that’s how economies grow over time.