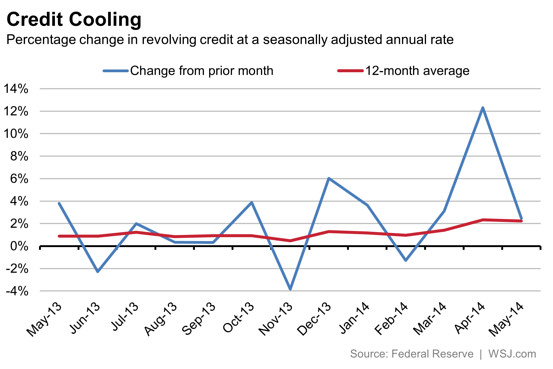 Growth of Americans’ credit-card balances slowed sharply in May, a sign consumers are cautious about adding to their debt burdens.

The amount of outstanding revolving credit — mainly credit-card debt — rose at a seasonally adjusted annual rate of 2.5% to $872.2 billion in May, according to a Federal Reserve report released Tuesday. That increase is far below the 12.3% pace recorded the prior month (which was the fastest rate of growth since 2001) and instead in line with the tepid gains recorded over the past year.

The data suggests April’s surge in credit-card balances could have been payback for an unusually cold winter rather than a new sign of consumer confidence.

The losses of income and wealth experienced during the recession may be lingering in consumers’ minds, Federal Reserve Bank of Richmond President Jeffrey Lacker said in a Tuesday speech.

“They’ve been cautious about expanding spending as a result,” he said. “So it’s hard to see a significant acceleration in consumer spending on the horizon.”

Still, credit card balances have generally trended up since falling during the recession and first years of the recovery. Revolving credit peaked above $1 billion in early 2008 and then fell to a low of $835 billion in February 2011.

The recent gains indicate “that consumers’ sense of job and income security are strengthening, which would make them more comfortable pulling out their credit cards for purchases,” said Credit Suisse economist Dana Saporta.

Overall consumer credit, including student and car loans but not home mortgages, climbed at an annual rate of 7.4% to $3.195 trillion in May. That gain was a slight deceleration from April but is above the pace recorded a year earlier.

The nonrevolving component has increased at a 9% pace for four straight months, led recently by car loans. U.S. auto sales rose 11% in May.

Other measures of consumer spending have been volatile this year. After declining in January, personal consumption expenditures rose at the fastest pace in more than two years in March, the Commerce Department said. Outlays then slowed sharply in April and May.

The April accumulation of credit-card balances could be a reflection of March spending.

Inflation-adjusted consumer spending rose at just a 1% annual pace in the first quarter, marking the slowest gain in spending since 2009. That small increase couldn’t offset declines elsewhere in the economy and was a key factor behind the nation’s worst quarterly economic performance since the recovery began in mid-2009.