Has China got an external-debt problem? Not likely – Real Time Economics 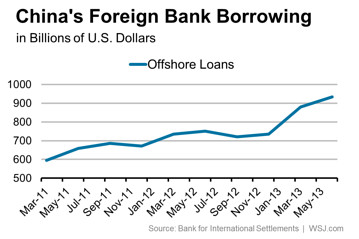 China’s growing taste for offshore financing has come into focus following revelations that much of the collateral behind billions of dollars in foreign loans was pledged for multiple loans.

With authorities trying to curb soaring credit as China’s economy slows, companies have resorted increasingly to tapping cheap global credit and investors hungry for higher yields have been only too happy to oblige them.

Overseas loans to China grew 50% in 2013 to $1.1 trillion, according to the latest data from the Bank for International Settlements. If that seems like a rapid increase, it is: the only countries in Asia that saw a faster surge in foreign credit was Laos. That puts China second in Asia behind Japan in terms of total borrowing from foreign banks.

Where does  the money originate? Of the 26 countries whose banks report to the BIS, China’s biggest exposure is to banks from the U.K., a group that includes British-domiciled banks with most of their assets in Asia, HSBC and Standard Chartered Bank. Loans from British banks to China grew 37% last year, according to the BIS, to $195 billion.

Fitch Ratings reckons Asian banks have increased their exposure to China two-and-a-half times since 2010, to $1.2 trillion. And in April, the Hong Kong Monetary Authority warned that lending to China by Hong Kong’s banks had become “a key risk factor to watch for.”

The second largest exposure is to U.S. banks, a group that would include Citigroup. American banks boost their loans to China by 14.6% in 2013 to $80.9 billion.

That doesn’t include the surge in offshore bond issuance by China in recent years. The amount of China’s debt securities offshore surged 58% last year to $274.3 billion, according to the International Monetary Fund, most of it by nonbank financial institutions.

What’s worse is that roughly two-thirds of those foreign loans are maturing in the next two years. Much of that is very likely trade financing and so more linked to trends in trade than in China’s domestic economy. But if China’s economy slows further or global rates rise, refinancing all that short-term debt is likely push up borrowing costs for cash-strapped borrowers.

That may spell trouble for companies struggling to keep cash flows up as economic growth slows. But is this a worry for China?

Probably not. The $366.4 billion in new foreign loans in 2013 is only about a quarter of the roughly $1.45 trillion in new domestic loans China’s banks made last year.

China’s foreign-exchange regulator puts the country’s total outstanding foreign debt at $863.2 billion, about 9% of the country’s gross domestic product, much lower than Thailand, Mexico or South Africa. That makes a debt blowout less of a possibility if the yuan currency continues to weaken.

China’s $3.95 trillion in foreign-exchange reserves are currently more than four times external debt, according to Citigroup. That gives the country enough firepower in theory to keep its currency fixed and its trade flowing smoothly even if foreign lenders shut off the taps.

Add to that the fact that China’s capital account is closed, meaning that while cash is clearly moving more freely in and out of China, it is still not an open economy. Capital markets are closed and the currency is managed.