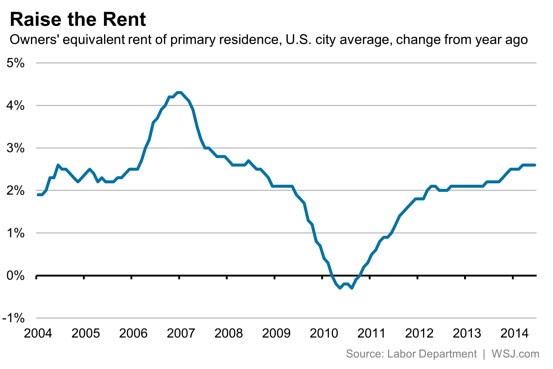 Is a recent uptick in housing inflation a fluke? Not really, say researchers at the Cleveland Fed.

Inflation has been rising on the back of higher housing costs for American households over the past few months, and the recent jump in the main reading of such shelter costs isn’t a blip, according to researchers Randal Verbrugge and Amy Higgins of the Federal Reserve Bank of Cleveland.

The consumer-price index, which is a leading arbiter of overall U.S. inflation, hasn’t included home prices since 1983. Instead, the Labor Department calculates “owners’ equivalent rent” to measure shelter’s impact on inflation. It blends actual rents with what homeowners might fetch for their homes if they were rented. OER makes up about a quarter of the consumer-price index.

In June, OER was up 2.6% from a year earlier, compared to gains of 2.2% in June 2013 and 2.0% in June 2012. Mr. Verbrugge and Ms. Higgins devised a forecasting model that they say indicates OER inflation is likely to stay high over the next year, as opposed to reverting back to its levels of the past few years. The WSJ takes a look Monday at how cities such as Nashville, Tenn., and Raleigh, N.C., have witnessed some of the largest apartment-rent increases over the past year.

First, some say a shortage of rental housing could be to blame, but vacancy rates remain close to levels from 1995, before home prices accelerated noticeably.

Second, big declines in unemployment rates could be contributing to rent inflation, the authors say.

Third, rents could rise because home prices are rising again.

A fourth reason cuts in the other direction: Low mortgage rates have lowered the monthly cost of homeownership, a development that could put added pressure on home prices by expanding the pool of potential buyers. That would reduce demand for rental housing, keeping pressure on rents. Lower interest rates also reduce financing costs for landlords. As a result, they might be less inclined to raise rents than they otherwise would.

They see housing inflation slowing to around 2% by the end of next year in the Northeast while rising to around 3% in the South. The model forecasts inflation holding at its current level of around 2.9% in the West and falling to 2% in the Midwest.

The model shows housing inflation through 2015 exceeding 3% in Los Angeles in Miami, followed by gains of more than 2.5% in Cleveland and New York City. Inflation is seen rising little from its current pace of around 2% in Philadelphia.